We’re just gonna start off by saying that if you see the man above begging for money at the side of your local sidewalk, you might want to think twice before dropping any Ringgits into his container. That’s because recently it was reported that this guy is actually some sort of conman.

Benjamin Holst, a 32-year old German national, is a guy who has been reported to have been going around begging in a few countries, and using that money for…not for needs like food or clothes, but for…other kinds of needs.

While not going into the legality of it, surely it doesn’t make him a conman for using donations to get some action every once in a while right? Well, it’s a bit more than that. This guy has actually caused quite a stir in some countries because of his begging practices.

He first gained notoriety after a big case in Thailand

When you look up Benjamin Holst on Google, it seems that his name only started to appear in the past couple of years when news about his “lifestyle” broke out in Thailand in 2014.

As the story goes, back then Benjamin had been telling people that he lost all his money and passport not long after arriving in Thailand, and someone took notice and posted his story on the internet, which got him a lot of attention (20k likes and 2k plus shares!). And eventually, a German organisation in Thailand took notice.

“Benjamin Holst, 29, was given a free stay on Friday night at the V.S. Guesthouse by Deutscher Hilfsverein Thailand, an organization that helps German citizens in Thailand, after he became homeless.” – Coconuts Bangkok

This organisation was even nice enough to give him 50,000 baht (about RM5,300 at the time) to buy a  flight ticket to back to Germany, but instead of actually going home…he ended up using the money to have a nice time in Pattaya! But how did people find out? Well because a few days later, people found him begging…again! And because he was already quite the internet sensation at the time, people recognised him, so there was no escape this time. And he was eventually detained by the Pattaya police. Unfortunately….

“They ultimately released him because there was nothing to charge him with, as being a d*ck is not a crime – especially in Pattaya.” – Coconuts Bangkok

Still, they eventually deported him back to Germany but he didn’t stay there for long because a couple of years later, he was seen begging in Hong Kong. It’s been reported he has been to other countries like the Philippines, Cambodia, Indonesia, and now he has made his way to Malaysia. And considering that he’s doing all this just by begging, doesn’t it raise some questions about how he’s managed to travel to soooo many countries?

How in the world do you travel the…world using donations?

We may think that begging is something that you do only when you’re desperate for money and can’t secure a job. But looking at how Benjamin Holst is able to do the things he does, there may be more than meets the eye. Many of us would have already heard of the existence of beggar syndicates in Malaysia (even though our gomen denies they exist), but we also found reports of such syndicates existing in Thailand, China, Indonesia, and Pakistan, they even cripple people to beg for them! 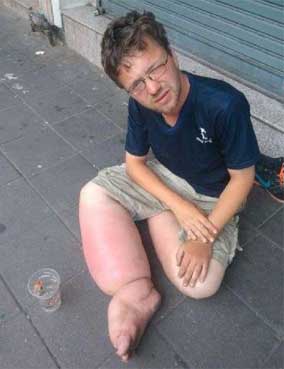 Holst has a condition called Gigantism, which is a condition where a person’s body releases an abnormal amount of growth hormones which makes their body grow bigger than it should. In Holst case, his is a variation that has only affected his right leg. And that, coupled with a few of his sad stories (whether true or false), seems to turn him into a real money maker (even though he’s actually able to walk just fine).

Besides that, there could be another possible reason that he’s able to get a lot from begging: because he’s white. We found a few articles which explore how white people are usually favoured in a lot of things in Asia (even when it comes to begging). In fact in China, it’s been reported that companies often “rent” a white person to just show “face”. We’ll admit that this is quite a controversial thing to say, but we’re just saying that this could merely be a possibility.

But if what he is doing may seem like a terrible thing by anyone’s standard, why hasn’t anyone arrested him yet? Well, because begging isn’t actually a crime in Malaysia. (A lawyer friend tells us that IF he’s arrested for anything in Malaysia it would be for cheating rather than asking for money, though there is a law that deal with beggars but that’s a little different.)

Why would a beggar keep….begging?

We would think that no person would ever be content just begging for the rest of their lives, but there is actually a psychological explanation for why people keep begging.

This article mentions that one reason why beggars start begging is because they see how other beggars profit from it. Known as the Social Learning Theory, a person may see another person begging and if they see that the result is a good one (getting money) rather than bad (like getting chased away), they may be inclined to try it. Also once they start, and they keep getting a positive response, there may not be a reason for them to stop. Still, as people keep learning, the numbers of beggars would also keep increasing. And in South Africa it seems that it’s such a big thing that articles have been written about it. And when it comes to foreigners begging in other countries, Benjamin Holst is not the only one. There was also a report of a British man begging in China. We don’t know if there are more, but considering that begging in this region pays off, there may actually be more.

So what? Just let him beg even if we see him?

If there’s any of you who are tempted to go and look for this guy on the streets, please don’t. His latest
Facebook post shows that he’s left Malaysia and is currently in Vietnam.

But despite that, perhaps one thing that Malaysians can consider is exercising caution when it comes to giving money to beggars. It seems that across the world, many people mention that giving money to beggars may actually contribute to the problem rather than solve it. In Malaysia, our gomen mentions that the number of beggars has actually gone up in the past few years, and is happening in many places across the country.

“The kindness of Malaysians are being taken advantage of by these beggars, regardless of whether they are locals or foreigners. These beggars are able to get about RM300 to RM1,000 a day.” – Junaidi Ayob, Selangor Welfare Department deputy director, as quoted by NST

But if not money, how else to help them right? Well, in a previous article when our former intern went undercover as a beggar, he mentions that if we really want to care for them, we should actually take the time to speak to them and find out what they actually need. On the gomen’s end, they should still continue to enforce laws to protect both beggars and people from syndicates. Respect to you, former intern. Click to read his article about going undercover as a beggar.

Once again, there doesn’t seem to be an easy answer to dealing with the issue of begging, but at the very least, we should be aware that there are beggars that seem like they’re advantage of the situation like Benjamin Holst, and look to put a stop to that.

Share this article:
NAH, BACA:
OMG Malaysia so hot, but why did it rain ice in Shah Alam?!