Love him or hate him, there’s at least 1 thing about the 4th prime minister of Malaysia that we might be able to agree on. It’s his name, Mahathir. He has a pretty nice name people. But I might be a little biased on this. Why you might ask? Well, its because I have been bestowed with the same name as him at the time of birth.

So… guess what this writer’s name is? *drum roll*

My name… is Mahadhir… Yea, I know, quite potong right. My name is missing the one letter that makes all the difference in the world, a T, although it’s nice to know that I have THE D 😉

I’ve lived all 21 years of my life with that name, and till this day I’m bombarded with political jokes and people calling me ‘Tun’… Some would even change their attitude at the very instance of hearing my name. No joke.

Well, who do I blame for this treason??? The one responsible for the name that I have is none other than the person with the name that comes after my bin, my dad Monihuldin. Wait, Moni-werrrt? It might sound like a really weird name for a Malay, but that’s probably because my dad is actually not Malay.

What kinda non-Malay dad would name his son Mahadhir?

So yea. My dad is actually…from Myanmar. *Jeng jeng jeng* Mhm, big daddy Monihuldin in the flesh. Its no wonder I get compliments about my good looks all the time. It’s all in the genes bebeh 😉 Image from family album Meet the family. It’s me, my father, my brother, his wife, and my mother from right to left. Image from family album

Well first off, back in the 1960s when my dad was in Myanmar, the country was facing a very turbulent period in its history. You can read all about it here, but in a nutshell, these are some keywords to describe life back then:

Made into a cute meme so that you don’t get too depressed. Unedited image from knowyourmeme.com

My dad, who had a degree in chemical engineering and an excellent term paper on refinery, managed to score himself a job in Malaysia, the country that he’ll one day call home. But aside from some prior research that he had done about our country, through books of course (you thought through the internet right), my dad was largely clueless about Malaysia when he first moved in.

And then one day, my dad met Mahathir You see that baaack row over there? Back summore. Yea, that was the area where the 4th Prime Minister of Malaysia was praying with my dad.

After moving to Malaysia, it was on one random afternoon that my dad decided to pray at the national mosque in KL. He was a little late, but he did manage to secure a comfy spot at the back row. However, on his way there, he noticed some ruckus that was going on behind him in what looked like a few people crowding around a man in the centre. But because the prayer was about to start, dad turned his head and paid no attention to what was going on.

As there was an empty spot open next to him, a person quickly occupied the space in the nick of time just as the prayer commenced, and in that moment, it dawned on my father.

The person next to him, the one that people were frantically lingering around, was our very own Tun Mahathir! Imagine trying to pray to God after what had just occurred to my dad…

Obviously my dad was super shocked, but he somehow managed to get through the whole prayer without going all cray cray. Even when he got to salam Tun Mahathir as part of the praying ritual, my dad was able to suppress his inner fangurl.

Well, my dad can. Image from quickmeme.com

He shook Mahathir’s hand and calmly walked away, LIKE A BAWS!

But from that day onwards, Tun Mahathir made a permanent mark on my father. He now sees Mahathir as the politician who was humble enough to settle for a praying spot at the back row of the mosque next to him, a stark difference to the power hungry dictators that he was exposed to in Myanmar.

And this time, it was an encounter that took place in the most prestigious of places, McDonalds. My father was with a Myanmar friend of his, planning to get some good ol’ burgers for their empty stomachs when all of a sudden, there was Mahathir with his family, only 2 body guards, enjoying themselves to a happy meal.

And suddenly, burgers became a distant thing of the past. They hastily got out from their queue just to get themselves a closer look at Mahathir, whereas the Tun was just slowly munching his way through his food (probably thinking to himself, “kepoh giler doh these people -.-“). But kudos to my father for respecting Mahathir enough to not go all up on his grill for an autograph or anything like that.

This just reaffirmed to my dad of how humble this man Mahathir is, to be able to simply chillax at McDonalds with his family, not having much care about his own social status among the public, while in Myanmar, politicians would walk around the town with a whole army surrounding them, demanding respect from every citizen they walk pass. So after all the random but captivating encounters my dad had with Mahathir, finding inspiration for a name to give his second son suddenly became that much easier. My dad went with Mahadhir without any hesitation. Cool, that’s all fine and dandy, but why in the world did he not choose Mahathir instead? Was it cuz the name Mahathir is actually spelt wrongly??

Well, according to the Islamic guidebook for Muslim names that my dad checked out, ‘Mahadhir’ is the true spelling for ‘the bearer of good news’. Sources say that in Arabic, the name is usually spelt Mahadhir or Mahadzir because of the Arabic letters ‘daad’ and ‘zaa’ that exists within its alphabetical order. It’s not something that’s confirmed by experts, but I sure as hell hope that I’d at least have 1 thing to brag about if I ever meet Tun Mahathir. 20 years after… Does my dad regret naming me that? 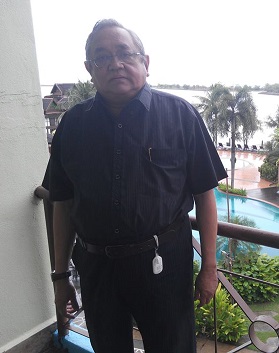 We all know that Mahathir has had his fair share of success and downfalls during his stint as Prime Minister. He was able to expand the country’s economy at one point, which solidified a place for Malaysia as one of Asia’s tiger economies. But he was also responsible for the 1998 Financial Crisis filled with bad investments that pushed Malaysia into a massive state of debt with the IMF (International Monetary Fund). Greatest of All Time boi! Unedited image from peta.org

So after all that, does my dad regret naming me after Tun Mahathir?

“I still think that he is the most influential leader we have in South East Asia, more than Suharto, Ne Win, all of them, and I would never take back the name that I’ve chosen for you in honour of him.”

“He can even lead the country right now, even in his 90s! He would do better than the politicians we have today.”

When asked about the shortcomings Mahathir had during his time in power, my dad responded by saying:

Looks like nothing can waver my father’s support for Tun Mahathir, even after all these years, and he’s still sticking to his guns for naming me Mahadhir. But to come and think about it, which father would tell his child that he regrets giving the name that he did anyway??

Although, if there was 1 thing that Mahathir did to upset him, it was this.

“He should have stayed on in politics as an advisor after declaring his retirement. The leaders after him needed good guidance for the country and Mahathir could have provided that to them. But he didn’t, so I was little disappointed about that.”

So I guess Mahathir can do something wrong in my dad’s eyes after all, even if it does sound a little like a pseudo-compliment…

And what do *I* think about my own name?

When it comes to Tun Mahathir, I take the neutral stance. I don’t see him as this great leader who was successful in leading his country to the promised land. But at the same time, I don’t look at him as the one person who brought distraught to the country during his reign.

He simply had his strengths and weaknesses. For what I do appreciate about him, which in my opinion is the Malaysian identity that he was able to cultivate, it’s opposed by what I dislike about him, primarily for all the bad economic decisions that he had made in the past.

And with regards to my name,  I honestly can’t imagine flaunting any other name than the one I already have. I mean, I’m pretty sure there’s a whole list of names that I would find to be much cooler than mine, but to trade my name, even with the most awesome of names out there, would be taking away a large part of what makes me, me. Besides, I’m also certain that there are tons of names more unfortunate than mine (Mr. Dick Dock Wang, Flavour Balls, Phat Ho, my apologies to you guys). And so, with full conviction, my name is Mahadhir, and much like our ex-PM, it comes with no apologies.