Recently we’ve seen a spike in major drug busts across the country, but then we saw one news headline that definitely got our attention: Upon looking into the news article tho, we found that the suspected druglord was a pil kuda dealer. And looking further into pil kuda, data from our National Anti-Drugs Agency (AADK) shows that there’s sadly been a resurgence in pil kuda cases in Malaysia; it’s been the third highest-used drug in the country (after methamphetamine and opiates) since 2014, and the number of pil kuda-related cases shot up (no pun intended) from 1,066 to 4,853 in 2017-18.

However, pil kuda isn’t a new phenomenon in Malaysia or in ASEAN; it’s actually been around since the 70s, and has been a major headache for the anti-drug efforts in Thailand, Malaysia, Myanmar and Bangladesh for decades now. We take a deeper look into the deadly phenomenon of pil kuda, and why its use is getting more and more widespread among Malaysian youth.

*Disclaimer: This piece is strictly for educational purposes only. We do not endorse the use of any illegal substance.*

Pil kuda is derived from methamphetamine, which has been around for a century

First synthesised in 1919 by a Japanese chemist named Akira Ogata and marketed as a legal pharmaceutical drug, crystallised methamphetamine was initially used by soldiers and pilots on both sides in WWII to fight fatigue and enhance performance. Even Hitler himself was known to have used it regularly. Kamikaze pilots were known to have been given high doses of meth before carrying out their suicide missions. Image from: Express

In the 70s-80s, a variant of methamphetamine was formulated in the Golden Triangle region (Burma-Laos-Thailand): a super-stimulant combining methamphetamine and caffeine that came in the form of a small red pill (around 5.5 mm). Initially called ya khayan (‘energy pill’) or ya maa (‘horse pill’; cos they used to give it to horses) in Thai, its use was widespread among the working class (particularly lorry drivers), who took it to stay awake on the job. It can be ingested via smoking or swallowing. 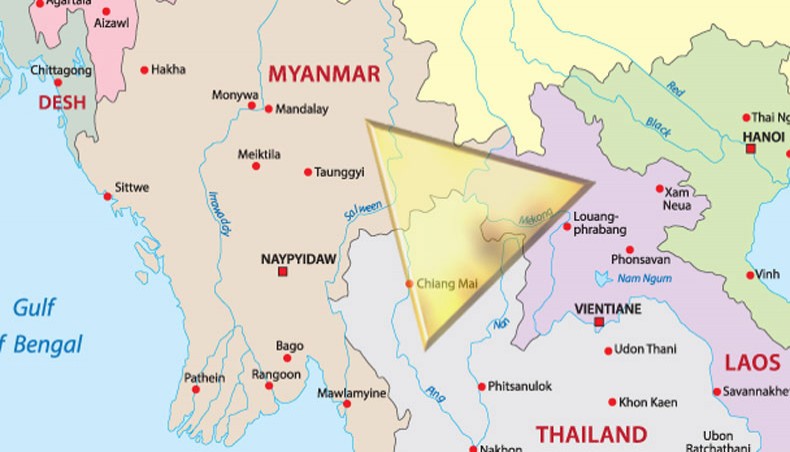 The Golden Triangle region, the area where the borders of Myanmar, Laos and Thailand meet. Image from: New Age World

Ya maa boomed all over the Golden Triangle region in the 90s, and was later made illegal in Thailand. The then-govt even renamed it ‘ya ba’ (‘madness pill’), while the West gave it the moniker ‘Nazi Speed’, giving you an idea of just how crazy this drug can be. In 2003, the Thai govt declared a war on drugs, especially ya ba, buuuut, like most ‘wars on drugs’, it didn’t go so well la. The Thailand police were openly encouraged to ‘shoot-to-kill’, and Thailand’s war on drugs resulted in the deaths of thousands of addicts (many of which were extra-judicial killings meant to meet quotas).

You could however see why the Thai govt tried to crackdown on it tho; ya ba addicts have been known to not sleep for days on end, have suppressed appetites, experience hallucinations and have aggressive tendencies, sometimes to the point of injuring or harming others. The reason users react this way is because of how pil kuda/ya ba affects the brain’s serotonin, dopamine, and nor-epinephrine receptors, which causes the addiction and adverse effects stated above. Prolonged use can also permanently damage both the brain and body, even potentially leading to death by overdose.

Today, it is estimated that at least 1.4 billion ya ba tablets are being produced each year in the Golden Triangle (primarily in Myanmar). Eventually it took over the whole of Southeast Asia, even reaching as far as Bangladesh. Malaysia would be no different too.

Ya ba later found its way to Malaysia, via the Thai-Kelantan border

Pil kuda isn’t new in Malaysia; it’s been smuggled primarily through the Thai-Kelantan border for years, hence why it’s most commonly used in the East Coast states of Kelantan, Terengganu and Pahang. How bad is the situation there? Well, according to Kelantan police chief Datuk Hasanudin Hassan, last year there were 17,741 pil kuda-related arrests in the state, an increase from the year before.

NAH, BACA:
Why Ismail Sabri's plan to make BM as ASEAN's 2nd language may not be such a bad idea.

And it doesn’t look like it’s getting any better either. According to those familiar with the situation, Kelantan could potentially become a ‘drug warehouse’ if the problem isn’t tackled, and that there are ‘addicts in every village in Kelantan’:

“In Kelantan, it can be said that nearly every village has a dealer.” – DCP Datuk Hasanuddin Hassan

“When I want to buy it, I just wave at other users who pass in front of my house and they will understand. Soon enough, it will arrive.” – Yuslah (not her real name) Because of their small size, the pills are often smuggled in plastic straws. Image from: Kosmo! Online

Although a couple of years back PDRM said that pil kuda was ‘going extinct’ in favour of newer drugs, the recent resurgence of pil kuda has shown anything but; police have been making bust after bust in the region, sometimes netting yields of tens of thousands of pills at one go.

In fact, just earlier this month, police busted a pil kuda syndicate hiding their stash of 74,000 pil kuda under their house, worth around RM1.48 million: And the situation isn’t any better in Terengganu either: also earlier this month, PDRM busted a jobless man who had 60,000 pieces of pil kuda in his house. And when you realise just how bad the effects of pil kuda are, it perhaps gets even worse when we realised…

The use of pil kuda is increasing among kids in Malaysia

Because of the ease of access to pil kuda, its candy-like taste, and its low price (around RM10-15 per pill) pil kuda is being used by more and more youths in Malaysia’s East Coast region. In Thailand, ya ba is being packaged and sold to children as candy, and the same MO seems to have become a trend in the northern Malaysian states.

There’s even a popular drug cocktail combining ketum, cough syrup and pil kuda, sold at RM5-10 a pop, making it not only easily concealable, but also very accessible to the younger generation because of its low, low price. And we’re not just talking teenagers and college kids here; kids as young as 10 and 11 years old have been using and dealing the pills. Some of them can even make up to RM30,000 a month:

“Put your hand in a schoolkid’s pocket, chances are you will find pil kuda.” – DCP Datuk Hasanuddin Hassan

So what’s the govt planning to do to tackle these issues?

The govt wants to treat drug addiction as public health issue, not a criminal one

As you can tell from the aforementioned failure of Thailand’s war on drugs, sometimes a tough approach to the drug problem may not work. That also perhaps explains the reversal of drug policies across the world, and Malaysia too is following suit by announcing their plan to decriminalise illegal drugs (to understand what exactly that means, you can read this article by our sister site AskLegal).

While it hasn’t taken effect yet, we’ve got lots of examples from across the world to see why this might be a good idea: for example, in Portugal, overdose deaths plummeted by 80% following their decriminalisation, drug addicts voluntarily seeking treatment have increased in number, and rates of problematic drug use have fallen.

Which are pretty much the goals of our government here too, as, in their words, our current policies and stigma towards drugs have trapped addicts in an endless cycle of ‘imprisonment and poverty’:

“An addict shall be treated as a patient (not as a criminal), whose addiction is a disease we would like to cure.” – Dzulkefly Ahmad, Health Minister

Perhaps, with this more holistic approach in mind, our kids may be able to stay in school and not do drugs in the near future.