Lately, when a trend happens that takes the world by storm, it’s usually only a matter of time before brands jump on the bandwagon. You miiiiight have heard, that the latest trend is this little mobile game called Pokemon Go. It’s had over 75 million downloads in less than a month, and it’s important enough that countries like Israel and Indonesia have posed security concerns about players wandering into restricted areas looking for little virtual monsters, and Pokemon Go searches exceeded searches for naughty pictures n videos.

Well this time, Maxis and GRAB literally MADE a bandwagon, and it’s called …. the PokeMobile!

So basically, it’s a GrabCar, that is created SPECIFICALLY with the goal of helping riders chase Pokemons. How’s it help?

Well first of all… it’s FREE! So all you gotta do is launch your GRAB app (download here), and keep a keen eye for when the PokeMobile is in your area. But that isn’t it… here’s what else it comes with…

Yep… those two crazy brands have really gone all out with this. To help you chase pokemons, it’s got…

Apparently, the PokeMobile has nothing to do with PokemonGo? 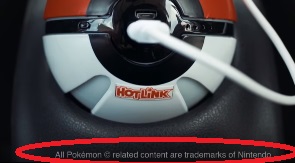 If you read the fine-print and listen to the video carefully, you’ll realise that there isn’t actually any mention of the words PokemonGo. That’s because this isn’t technically a PokemonGo product (yet). Our insiders at Maxis and Grab are pretty hush-hush-no-comment-wink-wink about it at the moment.

In fact, internationally, McDonalds is the only official brand with even rumours of tying up with Pokemon Go.

“Early details seem to indicate that all McDonald’s locations in at least one country, rumored to be Japan, will be turned into “PokéStops” or “Pokémon Gyms”, which means players will follow their GPS and congregate at these locations to engage in certain geographically tied in game activities.” – Brandinginsiderstrategy.com

The floodgates are soon opening though, with analysts saying that there’s huge potential in co-marketing and buying up locations for Pokemon hunters to meet up at. We can so imagine a PokeMamak coming to an area near you soon 😉

NAH, BACA:
Wah, someone actually made a comic book based on Grab drivers' stories

So is this [email protected]#$ game coming to Malaysia or NOT!? As we mentioned, the brands are still pretty hush about the official launch, but some really observant netizens actually spotted Malaysia listed on mmoserverstatus.com, a site that keeps track of whether Massively Multiplayer Online game servers are online or offline. Among other servers listed are Israel, Indonesia and China, all of which don’t officially have Pokemon Go announcements yet.

“Many of the servers particularly the ones listed in Southeast Asia are still offline and have no official launch announcement despite being on the list a week earlier. This however does give fans hope as Japan and Hong Kong got their official launch not long after the listing became available.” – New Straits Times

There is however, an International Business Times article that quotes reports saying Malaysia, Singapore and China might get it as soon as August, but the article doesn’t have any sources listed, so take it with a pinch of Ajinomoto k?

Actually, you can play it now in Malaysia! But it’s quite a lonely experience.. Before we get into this, we need to understand HOW Pokemon Go is blocked in Malaysia. It’s done with something called Geo-blocking, which basically uses your phone’s GPS to tell the app that you’re within a certain category of coordinates that qualify as Malaysia. Alot of existing apps already use this, for instance when YouTube tells you that this video isn’t available in your region.

Having said that, you now have TWO options.

1. To fake your phone’s coordinates – use a VPN to make your phone “think” it’s somewhere else, like the USA or something, then start playing. Click here for a guide. This is not strictly legal though.

2. To go to somewhere that might not qualify as Malaysia – Well, we don’t know the exact coordinates that classify as Malaysia, but some enterprising South Koreans actually found a spot near NORTH KOREA, (near the Demilitarized Zone!) that allows them to chase Pokemons. We’re guessing maybe take a trip to one of our lovely islands and give it a shot? (do let us know if this works in the comments!)

What we can tell you about both these options is that it’ll be quite a lonely experience. There won’t be many Pokemons around, or people. Since you’re the only one crazy enough to do it.