World Happiness Day was last month, but Malaysia hasn’t exactly been going through a good time lately. Despite that, it’s strange but Malaysians always seem to take it in stride. So we thought we’d explore a bit about Malaysians indomitable sense of joy, even in trying times.

Our buddies at Hotlink have similar beliefs, and have a pretty cool tie-in with Happiness Machines being set-up all over the country! What’s it do? Well basically, from today till May 18th 2019, look for Happiness Machines at McDonalds selected branches, smile at it, and it rewards you with either a Sundae, a McFlurry, 4pcs Chicken McNuggets or a McFly. Wait a what…?

Just share your smile with the world, and you can win a free FLIGHT! So just follow the simple formula up there. With any purchase, smile at the machine and get a Chocolate Sundae. If you have a MyMaxis or Hotlink RED App, show the Deals page and you’ll ALSO get a 4pcs Chicken McNuggets. Oh and if you share the smile you just took on your social media and hashtag #HotlinkXMcD and #Smile4Sundae, and you’ll be in the running to win a FREE FLIGHT! Here’s a video to help explain how it works.

Wow… as if Malaysians need more reasons to be happy! Last year we climbed the ranks to 35th happiest country in the world. This year? We unfortunately went all the way down to…. 80th?! Strangely though, the happiest country on that list is Finland, but this video shows that its citizens themselves are surprised at the result.

It’s an interesting point to ask if happiness indeed can be measured. In Malaysia, despite not having the highest of GDPs, the lowest of crime rates, or the best of weathers sometimes, Malaysians are a plucky lot, and we always have been. Why is this so? We thought we’d get to the bottom of this with some qualified professionals, so we spoke to Joel Low, from The Mind Psychological Services and Training, and Hetal Doshi, Organizational Psychologist and CEO of O Psych Sdn Bhd.  So let’s start off with a flame war.

Are we happier than Singaporeans?

Aiyak. So close. From the World Happiness Report 2018.

Blardy Singaporeans beat us again! By one! But this was actually in 2018. This year, they kept the 34th position, while we fell way back. Strangely though, this perception doesn’t seem to be mirrored in real life though, judging by the Quora answers on which country is happier, and our psychologists seem to agree as well. Kinda.

“There are two types of happiness – internal reality and the external representation of it. Singaporeans, no matter how happy they are, they express themselves in a cautious and reserved manner. For Malaysians, no matter whether they’re a bit happy, or very happy, on a social front, they would express themselves more casually. You can ask anyone who’s traveled between the two countries, they would without a doubt find Malaysians to be  friendlier and more chatty” – Hetal

However, she said, for social media keyboard warriors, where consequences are largely removed, strangely both Malaysians and Singaporeans seem equally “vocal and expressive”, which indicates that Singaporeans perhaps are similar inside, but probably are less comfortable expressing themselves in a real face-to-face situation.

“Let’s just look at the language. The language really determines the kind of beliefs and norms about a country. A quick Google search for Malaysian phrases reveals the top terms are “Bestnye” and “SyiokGiler!”, meaning not just great, but CRAZY great. On the Singaporean side, one popular term that came up was “Die Die also must try!”, so you can already see it’s totally different.” – Hetal

Another term she found popular in Malaysia is “Bojio”, which is Hokkien for “Didn’t invite?“, and it indicates a desire and straightforwardness in asking to be included in social occassions, whereas for Singaporeans, “Paiseh” (which roughly translates into “Embarassed“) is the more used term, which indicates that Singaporeans don’t want to be humiliated in social experiences. As for Joel? Like the Happiness report, he’s kinda sitting on the fence on this one.

“I think generally speaking we’re pretty much on the same level. But I think what separates us is the differences in terms of desires and wants. Stereo-typically, Singaporeans tend to have a bigger emphasis on material wants and desires, compared to Malaysians, who seem to have a bigger focus on food.” – Joel

And our kampung culture helps as well Image from Kampung Boy by LAT

“A very very important part of the heritage that enables this optimism is “kampung“. It’s not just beliefs, but the way that we live together and that can never be taken away from you. The kampung culture is extremely unique from one that lives in houses miles apart or guarded condos.

Everyone finds a way to look after each other, and also believe they will be looked after. A majority of happiness comes from social support, and it releases a beautiful hormone called oxytocin that has a way of mitigating stress hormones like cortisol and adrenaline. So it’s this villager lifestyle that make us believe in optimism wholeheartedly – Hetal

Most of us, even us in the big city are just one generation (or at most, two) away from staying in kampungs, and the proximity that that entails. Because of that, she feels that Malaysians generally do their best to achieve some level of connectedness. “Whether it’s real, or fabricated, there is this belief that this is the true essence of being Malaysian – how connected they are to each other,” she says.

NAH, BACA:
Why am I NOT getting matches on Tinder? Malaysian women answer

As for Joelle, he believes this applies to most Asian cultures, of what he calls collectivism, and that resulting in a more forgiving culture.

“Typically, and I’m talking very broad general strokes here, Asians tend to be more collectivist – like family first, whilst Western cultures tend to be more individualistic. So perhaps holding grudges would mean that there’s a greater chance of fracturing the whole, and letting things slide would mean that we can preserve the collective more likely. And I think it’s something passed down generation to generation. ” – Joel

Does it have anything to do with that undefeatable Malaysian sense of humour? 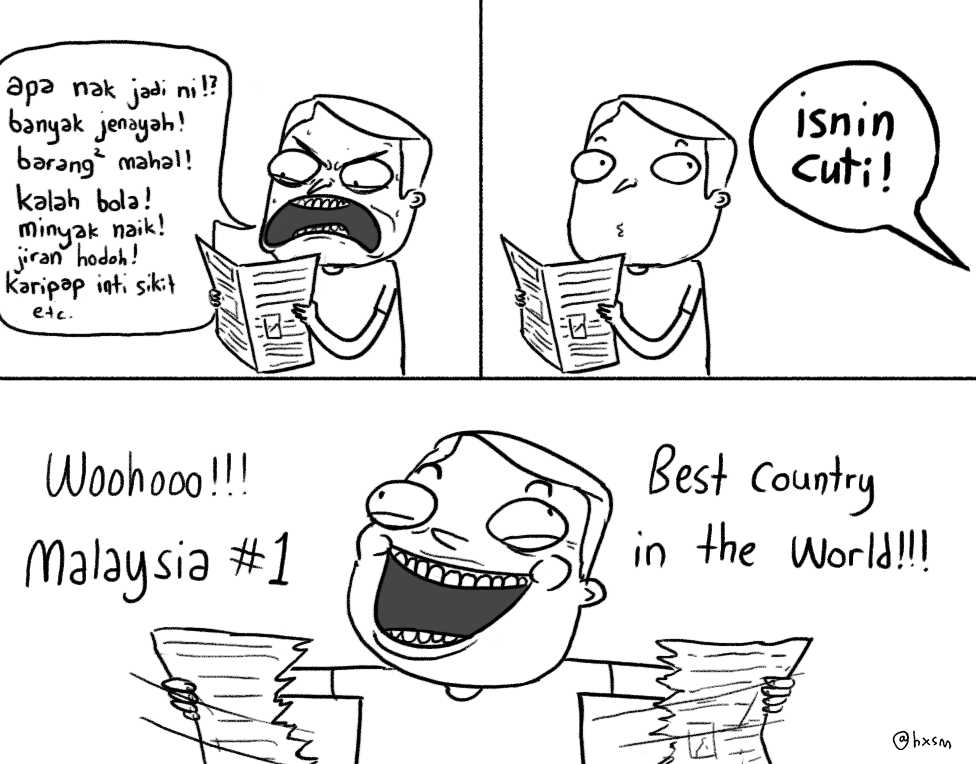 From the always funny cartoonist, HXSM

If you’re a Malaysian, you know that no matter what the situation, we’ll find a way to laugh at it, so we asked our two psychologists if this had anything to do with our happiness.

“Hahaha! I think collectively, we do have a pretty immense sense of humour and very little seems to phase us as a collective. Perhaps this ties in with the laidback nature that we have, or the fact that we use it as a defense. Cause what’s the alternative? That we get all gloomy and filled in despair? So perhaps, Malaysians in general are more in tune with good psychology then we give ourselves credit for, practicing choosing happiness, and allowing ourselves to be happy with what we have.”- Joel

It’s funny (haha), because in earlier times, having a sense of humour was actually viewed as psychologically damaging, indicating a need to hide the truth. Today, it’s recognized as a key tool to make others feel good, to gain intimacy or to help buffer stress. “Yes I do agree – Malaysians have an awesome sense of humour, and an impressive level of intelligence behind that humour, in particular in their PM! From our heritage, Malaysians are not the ones to go against harmony, which is part kampung culture, and part Asian culture as well, that the community is more important than oneself. When in extreme adversity however, the sense of community rallies them to do seriously extraordinary things.” – Hetal

On that point Hetal observed that while generally lighthearted and jovial, Malaysians could only be pushed to a certain point, “where things aren’t funny anymore, they turn that into taking action in creative and innovative ways“.

So kesimpulannya, Malaysians seem to be able to smile more in most situations, good and bad Rankings aside, our two psychologists seem to agree that even with the smallest of reasons, Malaysians have plenty of tools to smile – be it our sense of humour, or our sense of connected-ness to our fellow Malaysians.

Pair into that a good reason, and you’re guaranteed to have a good time. Don’t forget to drop by these McDonalds outlets, whip out your Hotlink or Maxis apps, and flash that giant big genuine kampung smile for the rest of the world to see 🙂