So um, yeah. We originally wrote this article back in Feb 2019, exactly a year ago when there was a lot of talk of there being a vote of no confidence against Mahathir, leading to the collapse of the Harapan govt. But fast forward to today, and Mahathir is no longer Prime Minister, Harapan has lost the majority in govt as well as a coalition member, and Najib’s having a field day on social media.

That being said, it won’t be the first time that Mahathir would suddenly find himself out of Putrajaya. In fact, the last time he was ‘unwillingly’ pushed out of office, a certain Chinese federal minister ended up as the (acting) Prime Minister of Malaysia.

We’re going to be cramming down years of political turmoil into a few paragraphs here, but stick with us okay. It began in 1987, when for the first time in Dr M’s tenure as UMNO President, he was actually being challenged for UMNO’s top post during the year’s party elections. And it wasn’t just anyone giving up a fight, it was former Finance Minister Tengku Razaleigh Hamzah, better known as Ku Li. 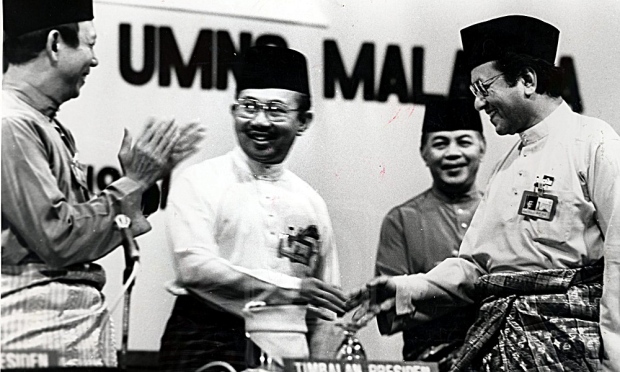 Ku Li in the middle shaking hands with Mahathir. Image from Utusan

“There existed two ‘teams’ in UMNO. Team A, led by Dr Mahathir, were a group of liberal Malay nationalists, while Team B had Tengku Razaleigh at the helm with a conservative Malay nationalist approach,” – Mohd Faidz Mohd Zain, et al, UKM researchers, as translated from their research paper

It was a tough battle, with big names such as Tunku Abdul Rahman, Tun Hussein Onn and Abdullah Badawi siding with Ku Li’s Team B, while Mahathir had his right hand men Ghafar Baba and a young Anwar Ibrahim by his side in Team A. In the end tho, Mahathir’s Team A would win big at the UMNO elections, with Dr M winning the presidency thanks to 761 votes compared to Ku Li’s 718. Many of the top posts also went to Team A. Mahathir following the announcement of his narrow win at the 1987 UMNO party elections. Image form Utusan

Ku Li and co weren’t pleased with the results to say the least, and a number of them would file a lawsuit, claiming that the election results should be voided due to a number of irregularities over a number of unapproved UMNO branches. Following a long and drawn out court battle, the judge in charge, Justice Harun Hashim would make the stunning decision on Feb 4 1988 to deem UMNO ‘unlawful’, deregistering the party.

“Very sadly, I have to make a finding in law that, at the material time, UMNO was an unlawful society,” – Judge Harun Hashim, as quoted by Malaysian Bar

Following that decision, Mahathir, with no more party behind him, could no longer be the Prime Minister. As such, it led to…

Ling Liong Sik was the MCA President and Transport Minister during the time of the drama, and from 4 Feb 1988 to 16 Feb 1988, Malaysia’s Acting Prime Minister too due to the trouble that UMNO was in. 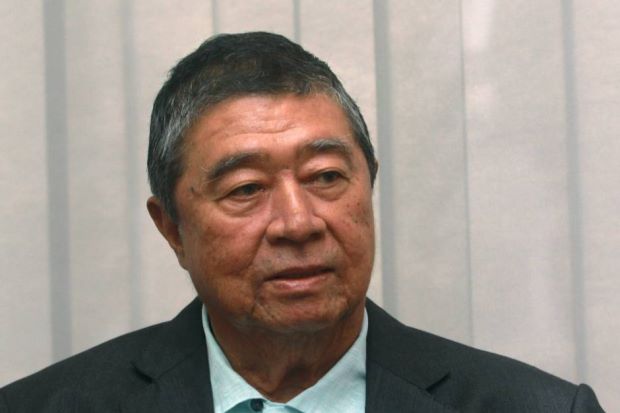 See, at the time, with UMNO no longer in existence, technically speaking the next in line to lead Barisan Nasional, the governing coalition, was Ling Liong Sik. This was because with UMNO out of the fold, MCA now held the most seats in the Dewan Rakyat among the BN parties, with 17 seats. If it wasn’t for the fact that BN was a coalition, UMNO’s brief disappearance could’ve had even bigger ramifications, as following UMNO’s dissolution the DAP actually held the most seats for a single party for time being.

As such, Ling was now the Acting BN chairman as well as the Acting Prime Minister. He would go on chair a Cabinet meeting too, tho it was probably a pretty quiet office judging from how there was no UMNO ministers there at all, not even Dr Mahathir. Whether or not he helped do Dr M’s claims or used his golden prime ministerial toilet  remains nothing more than speculation. On a more serious note tho, you probably won’t find any official records listing Ling Liong Sik as a Prime Minister as the position was never actually granted to him by the Yang Di-Pertuan Agong at the time. Mahathir and co getting down with the Sik-ness. Image from Din Merican

Meanwhile, for his role as Acting BN chairman, he would carry out that role for a grand total of… minutes. The story goes that during his first and only time as Acting BN chairman, he called for a BN Supreme Council Meeting, and then immediately approved Mahathir’s new UMNO Baru application to join the coalition, which pretty much signaled the end for Ling Liong Sik’s reign as the Acting BN chairman and Acting Prime Minister of Malaysia. We guess he wasn’t in charge for….. Liong. #ihatecilisos

In any case, it seemed as tho Mahathir was never too worried about the situation, even if for a few days his tenure as Prime Minister was affected. When UMNO was deregistered, Ling’s MCA, the MIC as well as the Barisan component parties quickly pledged loyalty to him, allowing Mahathir to have one less problem while he dealt with forming UMNO Baru. The way Barisan’s parties coped with the issue was even touted as an example of how being multiracial can guarantee survival.

As for Ling himself, he would continue in his role as Transport Minister til his retirement in 2003. However, his time in politics would continue to ling-er on as in 2010, he was charged with cheating the govt in relation to the PKFZ scandal. He would however be cleared of all charges, with Dr M even siding with Ling in the case. Ling was also again in the spotlight as one of the veteran BN politicians calling for Najib to resign back in 2015, and was even spotted at a Bersih rally in Perth. 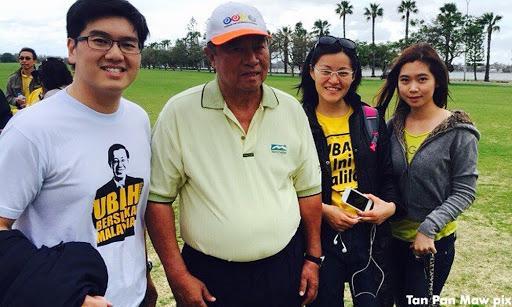 Could a non-Malay Prime Minister happen again… but for Liong-er?

Despite what your granduncle says at family gatherings when talking about politics, there’s actually nothing illegal or unconstitutional about a non-Malay becoming a Prime Minister. In fact, for just one day in 1973, V.T. Sambanthan too had to fill in as Acting Prime Minister when both the PM and DPM weren’t in the country. However, over the decades, it has pretty much become convention-slash-tradition for the Prime Minister to have racial and religious ‘requirements’. But that might be a thing of the past, as believe it or not, Mahathir himself was once quoted as saying he was confident a non-Malay could one day become Prime Minister of Malaysia – way back in 2000.

“The process towards this end has started. Believe me, if we are all sensitive to the tastes of Malaysians, the issue of race and origin will no longer obstruct any Malaysian from holding any post… Cooperate in the political, economic and social fields and we will all eradicate racialism and accept just any Malaysian to become prime minister and fill any post,” – Dr Mahathir, in 2000, as quoted by Utusan Online

Now some of you may have think that Mahathir has a point. A couple of decades ago for instance, no one could’ve foreseen that America would’ve had an African-American president, and yet Barack Obama would end up in the Oval Office, kinda showing that cultures can change over time. But then again, it’s also perhaps worth mentioning that Mahathir’s quote was said in front of a crowd of MCA fellas during their 47th General Assembly laa, so take what you will from that. In any case, unless you’re a psychic, only time will tell.