Yes. it’s been a very long week for all Malaysians. And that week looks to come to a close shortly, with the Agong announcing that Tan Sri Muhyiddin will be the 8th Prime Minister of Malaysia. Only coming into the limelight two days ago as a potential candidate, Muhyiddin now has the support of BN’s component parties, PAS, and the majority (at least at press time) of Bersatu.

But just when you thought there were no more twists…

But what exactly does that entail? Well just so happens that we actually wrote an article about votes of no-confidence, almost exactly a year ago! (let’s not make this an annual thing k guys?). At the time, it was a time that analysts already highlighting the disappointment people have towards the new govt

“Dr Mahathir had indicated before about a ‘pengkhianatan’ (betrayal), and there may be a vote of no confidence against him. We are not new in politics. Our president (Datuk Seri Abdul Hadi Awang) sensed something… that’s why we went to Dr Mahathir,” – Datuk Takiyuddin Hassan, PAS sec-gen, as quoted from The Star

Aiyo.  Essentially, some members of PAS as well as the social activist Mujahidin Zulkiffli claim that there’s set to be a vote of no-confidence against the Prime Minister put forward by those within Pakatan Harapan. Despite several top leaders of Harapan such as Lim Guan Eng and Mat Sabu coming out to deny the speculation of a no-confidence vote against Mahathir, their attempts certainly were not helped when banners calling for Dr M’s resignation and for Anwar to be PM appeared in Bangsar. But enough la with the conspiracy stuff. Right now, what you REALLY wanna know is… what would actually happen in the event of a vote of no-confidence against Mahathir?

IMPORTANT: Please keep in mind that the comments from experts here are NOT recorded today, but one year ago. The technical knowledge still applies. Jokes maybe not so much. Sorry.

So before we delve into the nitty gritty of it, it might be good to first give a quick idea of what a vote of no-confidence is. It basically happens when an MP puts out a statement asking other MPs in the Dewan to vote that they no longer have enough confidence in the Prime Minister to lead the country. Now we by no means deal with Dewan Rakyat procedures and formalities on a day to day basis… so we asked someone who did. We spoke to Ooi Heng from the Institute of Political Studies for Change (KPRU), and here’s what he told us about how a vote of no confidence happens:

For this, they need an ABSOLUTE majority in Parlimen, which means at least 112 votes. This is different from a SIMPLE majority, which needs only more than half of the MPs present in Parlimen at the time.  Now in the event that an absolute majority of MPs votes that they don’t believe in the PM, Ooi Heng suggests that there would be three likely outcomes:

While Ooi Heng only talked about the procedure, if you apply it to the current govt, then you can probably guesstimate some names for the first outcome, while the second outcome would mean then in the event of a successful no-confidence vote, the current DPM (who has yet to be confirmed) may end up as the Acting-PM.

That being said, there’s never been a successful vote of no-confidence against a current Prime Minister, altho there’s been attempts at it. One notable example of a proposed no-confidence motion against a sitting Prime Minister happened in 2008, just months after GE12, when then-Opposition leader Dr Wan Azizah submitted to the Speaker’s office a motion of no-confidence against the then-PM Abdullah Badawi in July of 2008. However, it failed to move on to the Dewan Rakyat, as the Speaker did not approve it. 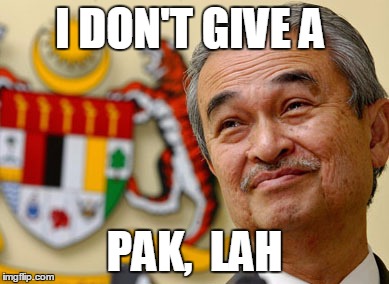 Abdullah Badawi’s reaction when asked about the no-confidence vote. Allegedly.

That’s not the only time a vote of no-confidence was attempted tho. In 2015, the then-PM Najib Razak would also be subject to not one, but two attempts of a no-confidence vote. Originally, MP Hee Loy Sian called for it, citing that the Malaysian public has lost trust in the PM. However, Wan Azizah as the then-Opposition Leader would later resubmit the no-confidence vote to replace the first one, claiming that the new notice symbolically represents the whole opposition as she made the call.

And yet, despite it making it slightly further than the Badawi attempt by actually getting onto the Parliament order paper (Parliament’s ‘things to discuss’ list) it was later then-Speaker Pandikar who would sorta shut it down by pushing it to the last thing to be discussed in the Dewan, and in the end, it’s kinda clear that he never got kicked out laa.

We guess he also don’t jib a pak about no-confidence votes too.

But right, if (and really if) a lot of MPs dun like the PM, a vote of no confidence isn’t the only way to get him or her out…

Every year, the govt will have to submit the budget bill, which signals the way the govt is set rule for the next year. However, if the majority of MPs in the Dewan opt to reject the budget bill, it is technically another way to say that they do not have confidence in the government.

Basically, this is one way to say ‘pak u’ to the govt as without approval of the supply bill, the govt basically has no funds to run the country. In the event of that happening, the PM would again find himself having to step down, and again the Agong will have to either decide on who to be the next Prime Minister.

Supply bill defeated? No worries! Just head over to freemoney.my

However, sometimes opposite of no-confidence motions can occur to, and actually has in Malaysian history too – the motion of confidence. Yes, it’s literally where MPs gather in the Dewan to say that they do have confidence in their leader. Visual representation of a successful confidence vote. Image from Says

The story goes that back in the 1970s, when Tun Razak was still in charge, his Deputy Prime Minister at the time passed away. While many expected him to choose a new DPM from the MCA, Tun Razak surprised many by picking Hussein Onn as his deputy. A few years later, Hussein Onn would suddenly find himself as PM following Abdul Razak’s death, and ended up being not just the Prime Minister, but Finance Minister and Defence Minister as well.

Now he probably realised that after being a surprise choice in the first place to become the Deputy Prime Minister, giving himself multiple Cabinet positions after being Prime Minister miiiiiiight not sit well with some la. So he would apparently end up ‘legitimising’ his rule by getting a motion of confidence in him proposed by a senator and passed by the Parliament, which means that his role as leader has been validated.

Original image from The Famous People

But enough about the history; what about the current situation? There have been so many twists and turns that most Malaysians feel a little nuts now. Just look at this timeline of events. Going back a year ago when we originally published this article, analysts (and us too) commented that a vote of no-confidence towards Tun M was highly unlikely. Well, turns out in Bolehland, anything is possible. If you don’t know what this refers to, you need to click on this amazing web comic series. Image from Bro, Don’t Like That La Bro’s FB page

Share this article:
NAH, BACA:
What do young people in Kelantan think of PAS? We ask 6 of them