You’ve heard about school field trips and all sorts of help to bring change to local communities. While they’re great learning opportunities, it’s not often that a project leaves a lasting improvement. Here’s the story of one such group of students who made a big impact in the lives of villages and fishermen in Sabah.

22-year-old University of Malaysia Sabah (UMS) student Suganya Subramaniam and a few other students who were with her, are not just ordinary university students on a field trip. She and 57 other students are members of the UMS Enactus Club. (P/S: Enactus is an international non-profit organisation that uses entrepreneurship to bring change to local communities. The organisation is comprised of students, academics and business leaders from 36 countries to improve the lives of the communities with a sustainable future.) So when they first visited Kampung Tudan, it was not a trip she was expecting. Even though the kampung was only about 60 kilometres away from Kota Kinabalu, she had to travel on rocky roads to reach there, and when she got there, things were not looking any better. It was then when she saw first-hand how poor the villagers were.

“…when the villagers told me that they have no money to treat their sick children, it made me more determined to carry out a project to help improve their livelihoods,” – Suganya Subramaniam, UMS student, quoted in New Straits Times.

Meanwhile, the students also visited Pulau Sepanggar, where 90% of the fishermen who lived there are artisanal, which means they still used traditional methods of fishing. Due to a decline of coral reefs around their island, the fish population of the island became smaller. This forced them to look elsewhere, sometimes going as far as a neighbouring island, which is more than 100km away.

Even so, their life was not getting any easier.

“The community in Pulau Sepanggar was stuck below the hardcore poverty line so we thought it would be a great opportunity to run the Project Payao project there. – Sarah Nafisa, Enactus UMS Team Manager, in response to CILISOS.

The first project, Project Payao, was designed to help the fishermen of Pulau Sepanggar. Here’s what they did. Based on concrete artificial reefs, a Payao is a simple and cheaper fish aggregating device (basically a device to lure fish) which builds a small ecosystem on its own.

“The Payao device consists of 4 key elements: the concrete base, coconut leaves, the ring buoy and the floater.

The concrete base serves as the anchorage as well shelter for fish. The coconut leaves act as the fish attractant, while the ring buoy and the floater help in keeping the coconut leaves upright.” – Sarah Nafisa, UMS Enactus, in response to CILISOS.

So here’s how it works: when algae grows on the coconut leaves, it will start to attract smaller fishes, which in turn attracts larger fishes to feed on them. Eventually, this forms a food chain where the fishermen can catch fishes like snapper, trevally and mackerel around the payao instead. 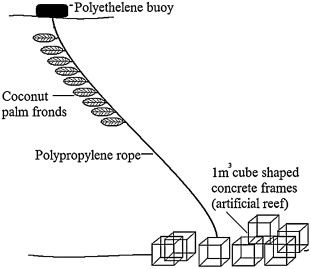 A design of the payao. Image credit to sciencedirect.com.

The second project was called Project Morus, and meant to help the villagers at Kampung Tudan. The team decided to capitalise on one special crop that was found in the kampung: mulberry trees! So… how to make them last longer? To solve their problem, they came up with an idea to make mulberry-based products that uses parts of the mulberry tree and fruit that were longer-lasting. Their answer was… mulberry tea!

“Through lab experiments, it was found out that the mulberry leaves have antioxidant properties and other nutrients like the green tea leaves. So why not make a Mulberry Tea Leaf product since the resources are abundant?” – Sarah Nafisa, UMS Enactus, in response to CILISOS.

But the communities were not onboard immediately

While the solutions proposed by the team had potential, it needed the cooperation of the respective community in order for it to work. For the fishermen of Pulau Sepanggar, they were already inclined to do anything that would improve their situation, but had their doubts about the effectiveness of the payao.

“They were a bit hesitant but as soon as we did 2 pilot installation of the Payao device at their island, they could see the results in a few weeks.

We continued to add 18 more devices with the help of the community.” – Sarah Nafisa, UMS Enactus Team Manager in response to CILISOS. For the Morus project, the team had to come back several times to visit the kampung, while showing the villagers on the field of how the project would benefit them.

“The head villager was indeed interested in our project thus he was also helping us in bringing more of the villagers to join this community project.

It didn’t take them long to be committed to be in the project as they were already familiar with the mulberry plant itself.” – Sarah Nafisa, UMS Enactus Team Manager, in response to CILISOS After managing to convince about 65 of the villagers, they began Project Morus and started a mulberry tree plantation in the kampung.

“We were also bringing Dr Fiffy, our faculty advisor to talk more about the project to the villagers as she is the researcher of this project. To make sure that the project is sustainable for the villagers, is where the Tudan Cooperative came in.” – Sarah Nafisa, UMS Enactus Team Manager, in response to CILISOS.

How did these projects do in the end?

For the fishermen of Pulau Sepanggar, the payao project had yielded a great catch for them.

That’s more than 3.5 times the initial average income! And thanks to the payao, the fishermen no longer have to travel to find fishes far from their island, so it has also reduced their monthly cost for fuel by 67%.

“When the other fishermen saw the potential of the device, we set up the Sepanggar Fishermen Club consisting of 23 registered member to monitor, manage and maintain the Payao devices on their own.” – Sarah Nafisa, UMS Enactus, in response to CILISOS The 18 other payaos to be installed. Image provided by UMS Enactus Club.

As for the Morus project, after a year since it began, Kampung Tudan now has a mulberry plantation with 1500 trees, over a span of 2 acres, and they have plans to expand it up to 10 acres.

The club even managed to build a solar-powered drying machine for the mulberry leaves that would retain their nutritional value, but they have even expanded their range of mulberry products to skin whitening lotions and sparkling water. Mulberry trees have become a cottage industry for Kampung Tudan and their products are now sold through the Sabah Tourism Board under the ‘Tudan Mulberry’ brand. As a result, the villagers have increased their monthly income from RM514 to RM700!

They actually represented Malaysia in a global competition… and won third place!

For its success and impact to the local communities, Enactus UMS was selected to represent Malaysia for the Enactus World Cup 2017 in London that was held in September. For the World Cup, the team was placed in a group stage with teams from Germany, India, Nigeria and Egypt, and they managed to take third place!

Even though they didn’t manage to advance to the finals of the World Cup, but winning the World Cup was not the big prize for them:

“I would the say the biggest impact other than improving their livelihoods is, having to see them working together because before the intervention of Enactus UMS, they were working individually and if they didn’t get any income that particular day, that was it.

Now, we get to see them working in a group, having business and agricultural knowledge, with constant self-improvements. It’s really heart warming what we can do to the community no matter how small or big the impact is.” – Sarah Nafisa, UMS Enactus, in response to CILISOS.

Share this article:
NAH, BACA:
So who actually gets money from lawless Malaysian drivers? The answer might surprise you.