Aah, funfairs. If you’re a millennial, you’d probably remember occasionally driving by these brightly lit carnivals where it should’ve been empty parking lots or fields and go OMG IT’S A FUNFAIR. That’s how it was before the days of smartphones and social media; someone in town would discover a funfair by coincidence and tell their friends and family about it. Every time a funfair was in town, there was this palpable sense of excitement, which is why it’s kinda sad that they’ve seemingly disappeared nowadays.

Actual reaction to being at a funfair. Img by Tenor

Before you smartasses go “well it’s because of COVID, DUH”, as far as we can remember, funfairs have been on the decline since like the early 2010s… but why? What could’ve caused funfairs to become gone-fairs? We’ve got a couple of theories as to why, and the first one is fair-ly (HEYOOOOO) obvious… Feeling cute might fall out of a Ferris wheel later. Img by NST

None of us at Cilisos have been in unwanted incidents at funfairs (knock on wood), but safety has always been a concern even at major amusement parks like Resorts World Genting or Legoland, much less the ones hosted on padangs and undeveloped acreage. Kinda understandable once you’ve experienced any of the rides at funfairs, like those cheapo plane rides that go in a circle, or bumper cars that work half the time.

There have been no shortage of incidents like this one back in 2013 where a 19-year old teen was flung off a ride like an oversized rag doll. In this case, the boy actually unbuckled his seat belt while the attraction was going full swing, so he’s gotta take a bit of the blame. On the other hand, safety devices like seat belts are supposed to be designed in a way that removal isn’t possible when it’s not safe to do so.

Says who? Says common sense, but more importantly, says the Guidelines on the Safety Management of Amusement Park Devices published by the Department of Occupational Safety and Health. It’s under part 7.2.4.3 of the guidelines:

ii. Enabling of release
It shall not be possible to enable the release of the restraint
devices unless it is safe to do so or unsafe not to do so That font choice instantly brought us back to our primary school days. Img by DOSH

Matt, a friend of ours who’s been to a funfair in Klang relatively recently (around 2017-2018) shared his thrilling experience with us:

…it looked really nice as we walked in, there were neon lights, carnival music, the works. Absolutely beautiful. But up close, you could tell that something was off. The attractions were kinda old, some of the paint was chipping and you could hear the metal creaking as the rides were moving… – Matt

That sounds like a rad time for adrenaline junkies, but if you’re anything like us, you’d probably avoid the rides and stick to the classic funfair games… except these games aren’t very fair. 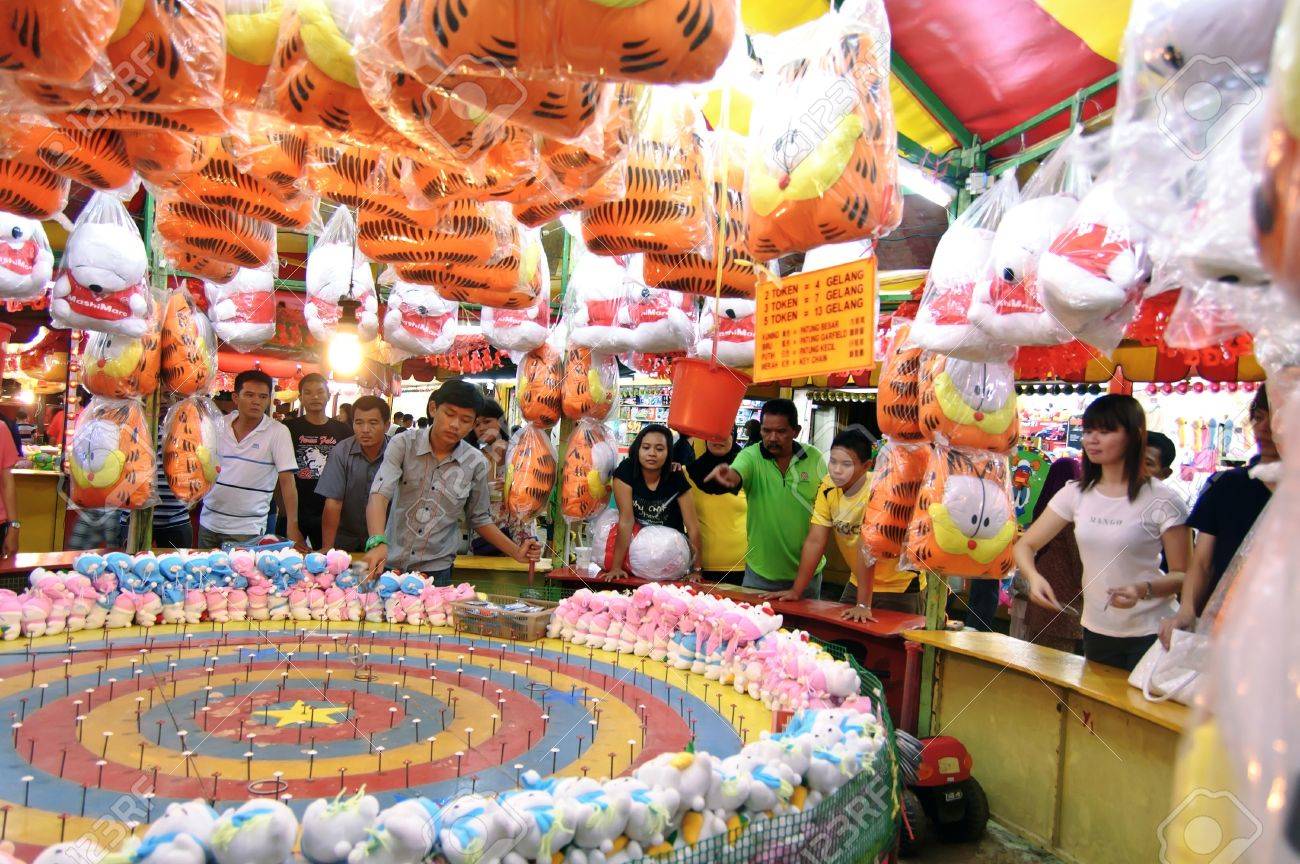 Those soft toys cost like 30 cents each or something. Img by 123rf

Most Malaysian kids in the 80s or 90s grew up on a sporadic diet of funfair games. Tossing rings onto bottles, popping balloons with darts, duck fishing, you name it. We’re all aware that these games are designed to fleece money out of parents and adults who’re in it to be fleeced. How likely are to actually take home a prize, though?

Two disclaimers before we go into some stats: 1) there haven’t been any studies done on Malaysian funfair games specifically, so we’ll be using stats from angmoh countries; and 2) the winning probabilities will differ from funfair to funfair.

Take the the ring toss game for instance. This one’s pretty standard –  you hand over some money to the funfair stall uncle, and you get a some rings to lob at glass bottles or at a selection of prizes. Seems harmless enough. The FBI certainly didn’t think so, because they did an entire study on funfair games in the late 70s, including ring toss game. Said study revealed that your chances of getting a ring over a neck of a bottle are anywhere between 1 in 580 to 1 in 700.

Most people after trying 50 times to win at a funfair game. Img by KYM

Certain games aren’t as rigged as others; the throwing darts at balloons thing is winnable, but what usually happens is they underinflate the balloons so darts are more likely to bounce off them rather than pop them. Shenanigans aside, the prices of these fun fair games aren’t what they used to be. Our editor-in-chief remembers getting 2 rings for RM1 for the ring toss game back in the early 2000s, and apparently, you’ll get something like 5 rings for RM10 nowadays… which might be another contributing factor in the dwindling numbers of funfairs around Malaysia.

Maybe people just aren’t that into getting fleeced any more. Maybe land rental prices in more developed areas are getting out of hand. Or maybe…

Do people prefer to go to “legit” theme parks instead? Or queue for 45 minutes at every attraction.

If your parents aren’t the kaya sort to be able to fly your family to Disneyland, your first proper theme park experience would more likely than not have been Genting. The mountaintop entertainment hub has grown to be a household name in Malaysia since its inception in 1994, and we think people (or at least West Malaysians) prefer to go there instead of a rinky dink funfair.

We couldn’t find exact numbers for visitors to Resorts World Genting, but according to their annual reports, their revenue from “attractions & entertainment” (revenue from their casino is listed separately) between 2017 and 2019 have seen a 7% year on year growth, give or take. Considering that there’s also been a 2% growth in revenue coming from Malaysians in that same time period, it’s possible that we’ve hit the nail on the head. We’re not economists, though, so take that nugget with a pinch of salt.

Here’s another fruit for thought: people are taking safety more and more seriously, and they perceive the rides at Genting as safer for both themselves and their family. Genting does appear to maintain and test their rides regularly, so that’s probably not too far off the mark. There has been rumors of an accident involving the Solero Shot ride, but the only thing we could find was this escalator that caught on fire between the Genting Grand and the First World Hotel. Totes sounds like a exhilarating concept for a new ride.

Funfairs still have their own nostalgic charm Can’t wait to check out one of these again. Img by Images of Ipoh

In the end, whatever the reason is for the decrease in numbers of funfairs around the country, we don’t mean this to be an article pooping on funfairs; it’s quite the opposite. Given the opportunity, we think most people (including ourselves) won’t hesitate to pay a visit to a nearby funfair, whenever they’re available. Matt, our friend from earlier agrees:

Would I visit a funfair again? Heck yeah. There’s just no replacing the feeling you get from an old school funfair. At moments, the rides almost made my heart beat out of my chest, but that’s what made them truly memorable. – Matt

You can still find funfairs dotted around the country, some of them being permanent fixtures instead of temporary ones. Here are a few that we found that y’all can visit once the world opens back up:

Share this article:
NAH, BACA:
Zoo? Aquarium? Or theme park? We find out why Malaysians are flocking to this HK attraction