Unless you’re a constant Twitter user, you might’ve missed a hashtag that was trending recently: #BoycottMalaysia. Boycott Malaysia? Well for a start, as you can probably tell, these tweets aren’t from our locals, but rather from Indian nationals. So what exactly has got the people of India so riled up that they’re tweeting about threatening to stop visiting Malaysia and to halt trade with us?

So for context, Mahathir was recently at the UN to give a speech, and that speech was also live-tweeted out onto his Twitter account as he spoke. In that speech, Mahathir touched on how despite the atrocities inflicted onto the Rohingya people in Myanmar, the lack of action taken meant that less world leaders are taking the UN seriously. Dr M then tried to back up his argument by using the case of Jammu and Kashmir, a state in India.

There may be reasons for this action but it is still wrong. The problem must be solved by peaceful means. India should work with Pakistan to resolve this problem. Ignoring the UN would lead to other forms of disregard for the UN and the Rule of Law. pic.twitter.com/QOQtIkPTC1

We’ll go into more detail in a bit, but basically, the question of who the region of Kashmir belongs to remains a big international dispute between India and Pakistan. According to Dr M, despite UN resolutions (dating back to 1948 no less) calling for a peaceful resolution to the Kashmir conflict, the “country has been invaded and occupied.” Notice that Dr M never actually called out India as being responsible for this ‘occupation’. So why did so many people from India get annoyed at this tweet?

Upon further digging, we found another post with Mahathir’s speech, with more retweets (kinda like shares basically), from a user called ‘Pak Army’. And this post kinda twists Mahathir’s words by claiming Dr M told the UN that Kashmir was invaded and occupied by India. Nevertheless, the damage had already been done. As you saw earlier, there were plenty of tweets with the hashtag #BoycottMalaysia. This would also catch on among Malaysian Twitter users, some of whom fired back in er, less than hospitable ways to say the least.

#BoycottMalaysia#BoycottIndia
Let's send back millions of India nationals working in Malaysia.
India is a rapist n dirty country!!
We dont need your citizens working here.. send them back!!

Lets not forget, India is the home to gang rapes and backwards concepts like the ridiculous caste system. Not to mention that their sanitary standards are, well, shit. So let them #BoycottMalaysia. We couldn't care any less.

Anyway, for some of y’all who don’t read the international section of the paper, here’s a quick rundown on why the issue of Kashmir is a touchy subject for India (and Pakistan for that matter). Map of the Kashmir region. Image from Wiki Commons

We’re gonna be simplifying decades of political turmoil here so hang in there aite.

The region of Kashmir is this mountainous area that’s claimed by both India and Pakistan in full, altho they both currently rule part of it. Now the area that Dr M was talking about is Jammu and Kashmir, an Indian-administered state that is also India’s only Muslim-majority state. Because of the big differences in the way the people of Jammu and Kashmir lived compared to the rest of India, since the 1940s India’s Kashmir had its own special autonomy, granting it things like it’s own constitution, flag and laws.

Now the area had always been tense, seeing as both countries continue to argue over it, but recently things escalated into new heights. In August, the Indian govt decided to revoke the special status of Jammu and Kashmir, leading to protests in the state which in turn led to the Indian govt sending in the troops to maintain peace. Kashmir also allegedly remains under curfew. 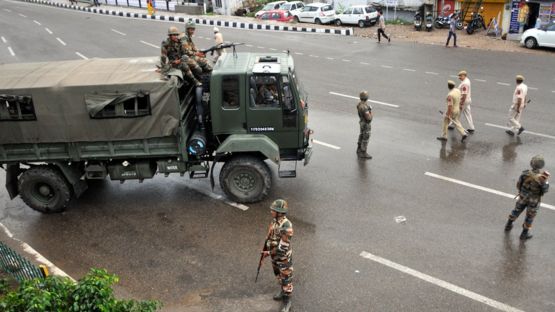 Indian military personnel in Jammu and Kashmir. Image from BBC

This led to further condemnation of India’s claim on Kashmir by Pakistan’s Prime Minister Imran Khan during his own address at the UN.

“Does he [Modi] think the people of Kashmir are quietly going to accept the status quo? What is going to happen when the curfew is lifted will be a bloodbath. They will be out in the streets. And what will the [Indian] soldiers do? They will shoot them … Kashmiris will be further radicalised,” – Imran Khan, Pakistan Prime Minister, as quoted by Al Jazeera

India however denied these claims. The Jammu and Kashmir state govt claim that normal life has returned to the region, and called Imran Khan’s speech a lie.

“Pakistani PM Imran Khan’s address.. is a story of falsehoods. By peddling half truths and deliberate lies, Pakistan was attempting to divert attention from its own terror record… It is a myth being propagated that there is a virtual clampdown in J&K. Nothing could be farther from the truth,” – Jammu and Kashmir state govt official, as quoted by Economic Times

Now if you’ve played those strategy videogames like Civilization or Age of Empires, you’d know that whenever a war or an argument breaks out between nations, the leaders of both parties would look at other countries for support. Based on the earlier #BoycottMalaysia tweets, you might have assumed that our govt is leaning to one side or another, but in actuality…

Malaysia has usually remained neutral in the India-Pakistan Kashmir conflict

As mentioned earlier, a lot of the drama began in August, and Mahathir was quick to respond to the escalating tension. The Prime Minister’s Office released a statement around that time calling for all parties in the conflict to take a step back and respect the UN’s decisions and instructions. You can check out the full statement from Malaysia’s PMO here, but below is a quick snippet:

“Malaysia is concerned over the recent developments in Jammu and Kashmir, in particular, the repeated escalation of tension in the region.

As a close partner to both India and Pakistan, Malaysia places high hopes that the two neighbours will exercise utmost restraint to prevent further escalation that could be detrimental to the peace, stability and prosperity in the region.

Malaysia always believes that dialogues and consultations are the best routes to a peaceful and amicable solution over this long-standing issue,” – Prime Minister’s Office, 8th Aug 2019

In the meantime, while the Kashmir conflict drags on, it’s perhaps best to remind those of you on Twitter that while the #BoycottMalaysia trend isn’t a nice thing to see, it’s also probably not the best idea to respond with insults towards them.

An eye for an eye can only make the whole world blind.