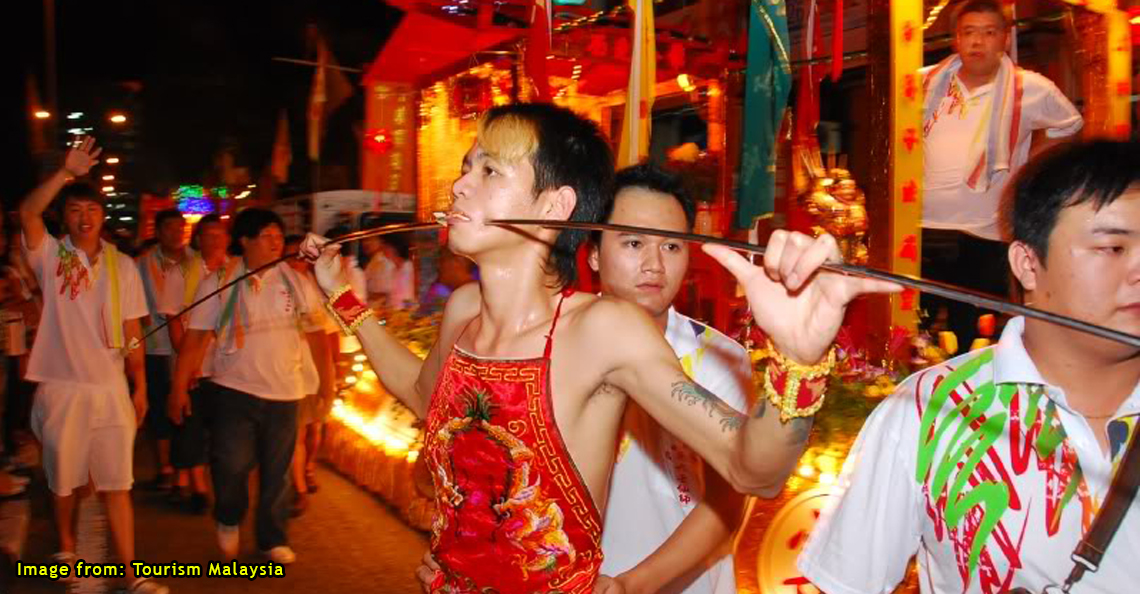 During the last week or so, you might have noticed traffic on major roads moving slower than usual because of very, very large processions with elaborate, colourful floats moving through the streets, accompanied by speakers blaring loud feng dao/mando-pop music and devotees swaying about in a trance-like state.

And on top of all that, these guys have 9-foot skewers in their mouths! It kinda looks like Thaipusam (and indeed, that’s what this writer was reminded of), but as it turns out, the two festivals, while completely distinct from one another, actually share some similar concepts.

So what is this festival exactly?

Called Kew Ong Ya in Hokkien, it’s an annual Taoist celebration that’s held on the first nine days of the ninth lunar month and is meant to celebrate the arrival of the Nine Emperor Gods (the gods of the stars and planets), who are said to have control over the affairs of life and death. It is also meant to bridge the gap between celestial beings and humans for the salvation and protection of mankind.

While its exact origin is unclear, the Nine Emperor Gods Festival is said to have originated in Fujian, China, and later spread to Malaysia, Singapore, and Southern Thailand, where it is also celebrated. Dou Mou, the Goddess of the North Star (topmost), and her nine sons, the Nine Emperor Gods from which this festival gets its name. Image from: FB page Kisah Para Dewa dan Ajaran Tao

In Taoism, the Nine Emperor Gods are said to be the nine sons of Dou Mou (the Tao equivalent of Guan Yin in Buddhism). In popular culture, the Nine Emperors were said to have been the Chinese Robin Hoods; stealing from the rich and giving to the poor. Upon being cornered at seaside by a group of soldiers, they were rescued by a giant red turtle that ferried them to safety.

However, the origin story of the Nine Emperor Gods has evolved over time; in modern times they are generally accepted as a symbol of martyrdom and/or rebellion against the Qing dynasty. There’s even a version which associates the Nine Emperor Gods with Zheng Chenggong, the pirate leader of Ming forces who rebelled against the Qing Manchu state and captured Taiwan from the Dutch.

According to the devotees we spoke to, much like Thaipusam, those celebrating the Nine Emperor Gods Festival dedicate themselves to vegetarianism, sexual abstinence, and general good behaviour prior to the festival proper as a form of self-purification to ask the Nine Emperor Gods for blessings and to drive away misfortune:

“We abide by the rules of being clean, that’s why they have to go vegetarian, no sex, cannot simply curse. We believe in their (the Nine Emperor Gods’) power to cure illnesses, to make our life smooth, improve luck, work, etc. If you are not on vege (diet), you cannot go inside the temple to pray, because you are not clean.” – Anonymous Penang resident

Beginning on the last day of the 8th lunar month, it starts with the invitation of the Nine Emperor Gods, before ‘escorting’ them to the designated temple. Because of the Nine Emperor Gods’ association with the sea, these invitation ritual locations are generally located near bodies of water, such as river banks or beaches. In Penang, where the festival is particularly significant, there is a temple specifically built for this purpose near the coast of Seberang Prai. The managing trustee (selected each year ‘by will of the gods’) will carry the sacred Urn (which is shrouded in secrecy) to the selected beach or river bank. Nine sedan chairs will be prepared for each of the Nine Emperor Gods, and Taoist priests will summon their spirits through a series of chants, and they will then ‘descend from the stars’ and ‘possess’ the bodies of mediums. After that, the procession will commence, leading all the way to the temple.

Also similar to Thaipusam, these mediums will perform superhuman feats while in this state of trance, including self-flagellation, bathing in boiling oil, fire-walking, as well as piercing hooks into the skins of their backs with hooks and 9-foot spears into their cheeks (don’t worry, somehow there’s no blood and apparently it doesn’t hurt). They will then walk and dance along a 10km road, and at times even interact with the people around them.

There is also an popular practice of ‘borrowing’ money from the deities: devotees may donate a minimum of RM3 from their own pockets, and ‘borrow’ a maximum of RM1 from the deities for luck. The firewalking (… running?) ritual. Image from: Only Penang

During the 9-day festival, devotees create a carnival-like atmosphere to celebrate the Nine Emperor Gods

If you party hard, enjoy being in crowds and like pretty lights and loud music, chances are the Nine Emperor Gods Festival is for you.

The processions are highly dramatic and very festive: there are lion-dance troupes, sedan chairs, music, lights, fireworks; there was even a special guest appearance by the Electric-Techno Neon Gods from Taiwan at last year’s festival (no, really)! The Electric-Techno Neon Gods joining in the fun at last year’s procession in Penang. Yes, they are a thing. Image from: The Star Online

Not forgetting the rows and rows of stalls selling all kinds of vegetarian food, especially colourful tortoise buns (mi koo) synonymous with the festival, as a tribute to the giant tortoise that saved the Nine Emperors from their doom. Here’s more from the festivities from last year, including footage of mediums piercing themselves with the spears (*graphic content warning*):

It might not be as well-known as CNY, but the Nine Emperor Gods Festival is actually an important part of Taoist culture all over Southeast Asia

While the practice of worshiping the Nine Emperor Gods has declined ever since its export from Southern China, it is still very much alive and well in Malaysia, Singapore, Indonesia and Thailand. In Thailand (there it’s called the Phuket Vegetarian Festival), it is a highly auspicious event, and is held yearly on a mega-scale thanks to huge sponsors. The Phuket Vegetarian Festival. Image from: Phuket.com by Hotels.com

In Malaysia, while it may not be as well-known as other celebrations like Chinese New Year or Thaipusam, the Nine Emperor Gods Festival remains a huge cultural tradition, and has been for the past 50 years.

Locally, the festival is arguably the most happening in Penang, where processions can stretch on main roads as far as the eye can see. It’s certainly entertaining to watch (as you can see from the images and videos), and is definitely a unique experience not to be missed if you find yourself on the island anytime from now until 7th October 2019.