Way back on the afternoon of May 25th 2000, while our older readers were listening to the Spice Girls on Hitz, a hippie-looking Swiss man just said goodbye to his friend before attempting to climb up Bukit Batu Lawi, Sarawak alone. He would never be seen again. Because of its extremely steep hills that even the locals are wary of climbing, you would think it’s just another angmoh tourist being a bit too adventurous. But this was no tourist. This was a man who had spent the larger part of his adult life in Malaysia, and for his efforts… had been labelled an enemy-of-the-state as well.

This was Bruno Manser.

But… why was this angmoh so interested in Sarawak anyway? Born in Basel, Switzerland in 1954, he was a modest and shy boy growing up, while also showing a love for the outdoors, and an anti-establishment slant. At 18 years old, he rejected military service (cos he believed in Gandhi’s non-violent methods) for his country and had to go to jail for 4 months because of it. Once he was out, he spent 12 years as a shepherd in the Swiss Alps before venturing to Southeast Asia to find the “deep essence of humanity” and “the people who are still living close to their nature.”

He first spent a few months with some Bangkok farmers, then to Kelantan and then Terengganu, where the family he was staying with told him of the Penan tribe in Sarawak – indigenous people who still lived in the middle of Sarawak’s lush jungles, totally separate from civilisation (there’s a conflicting story that says he found out about them at a library).

So in 1984, he joined a Gunung Mulu caving expedition… and after the expedition was finished, he ventured on into the deep jungles by himself, to find the fabled tribe. This first attempt was a bit ambitious tho, as he soon ran out of food, and fell ill from eating a palm heart. Eventually though, near the forests of Limbang, he found them.

Bruno, with the Penan tribe

The Penan are a tribe of people who live off the rainforests of Sarawak thru fruits and plants, as well as using blowpipes for hunting. The Penan people are known to live in a very equal society, where sharing is so common they don’t even have a word for ‘thanks‘.

However, at this point, Bruno didn’t know ANY of their words, and just followed them quietly.

“Bruno had a thicker skin than anyone I have ever met. He followed the nomadic group like a lost puppy, and, after some weeks, they took him in.” – Bruno’s friend, John Kuenzli to TIME Magazine in 2000

The Penan initially treated Bruno like a small child at first, fondly remembering how he didn’t even know how to fold a leaf into a spoon. But eventually he learnt to live the way they do – eating na’o (a type of starch made with sago flour), hunting and fishing, all while wearing nothing more than the traditional Penan loincloth.

The Penans took to him as well, calling him Laki Penan (The Penan Man). Along Sega, the Penan community leader, treated Bruno as if he was his own son. Once the media got to know about him, they labelled him as “White Tarzan”, and often painted him as a fool, who’d gone native and taken two Penan wives (which he denies).

He also became a meticulous note keeper, writing down a lot of things he learned and noticed during his time in the jungle. Bruno spent a lot of time drawing the things he saw around him as well. Among these notes, he also admired their way of life…

In his own words, Bruno felt like “like the child in the belly of the mother.” and had found his “paradise“. However, within less than a year, he was already fighting with his life to keep his paradise intact A Penan blockade in the 1980s. Image from Bruno Manser Fonds

Bruno Manser discovered his Penan paradise at a time of great change and challenge. The timber companies had begun to creep into the areas where the Penan moved about. He began to go around the rainforest, seeking out other tribes to bring them together in the fight to keep their land. He organised meetings between the tribal people, starts educating them on their rights and became their secretary of sorts as he was the only one who could read and write. Together with leader Along Sega, Bruno helped to form blockades to try and stop the bulldozers.

This came at a cost, as the attention he was getting made him a wanted man among some powerful people, with a RM500,000 bounty allegedly placed on his head. It didn’t help that his 1983 tourist visa had been expired for years.

“It is a sad fact that the poor are exploited by the rich. Without shame, they’re walking right over them. Ten years from now, all the untouched areas will be destroyed unless someone stops it,” – Bruno Manser, in his notes

Eventually he had to leave as his parents fell ill. But even back in his birth home of Switzerland – he found a new way of helping the Penans. His first foray into stunt-activism was at the G7 summit, climbing a 30-foot lamp post and hanging a banner of it; followed by a hunger strike outside the Swiss Federal Palace to ask for a ban on tropical timber imports. And then there’s this… Bruno Manser braves 140km/h speeds in a selfmade kart to drop 800m onto a cable car line to hang a banner saying ‘Save the Rainforest’ in Germany. Image from Laki Penan

And of course over time, gaining attention from the press, he also made a powerful enemy in Sarawak’s notorious Chief Minister at the time… Taib Mahmud.

“It is hoped that outsiders will not interfere in our internal affairs, especially people like Bruno Manser. The Sarawak government has nothing to hide. Ours is an open liberal society.” – Taib Mahmud

This feud would last for more than a decade. But in 1998, in an effort to reconcile, Bruno offers to work on a cooperative effort to protect the Penan tribe, while asking to government to pardon his previous immigration crimes. Unfortunately, Taib’s office never got back to him. So Bruno decided to resort to more drastic measures. In 1999, Bruno eventually snuck into Kuching wearing a business suit with a badly knotted tie, and rented a paraglider to deliver a toy lamb (as an offer of peace) directly to Taib Mahmud at his residence during a Hari Raya celebration. Predictably, he was jailed for a few days. His captors recorded him playing with his toy lamb constantly while he was in prison. He was then shortly deported back to Switzerland. But his actions were starting to get ALOT of attention.

“After hearing of Manser’s actions, Al Gore condemned logging activities in Sarawak. Prince Charles also described the treatment for the Penan tribe as “genocide.”[3] The British Broadcasting Corporation (BBC) and the National Geographic Channel produced documentaries about the Penan tribe, and Penan stories were also featured on Primetime Live. Universal Studios started to develop an action-adventure horror script where the Penan tribe used their forest wisdom to save the world from catastrophe. Warner Bros also developed a script on Bruno Manser story. The Penan tribe also received coverage in Newsweek, Time, and The New Yorker.” – Wikipedia

But Bruno’s dedication was slowly chipping away. He noticed more and more Penan families being forced into selling off their land for money out of desperation. In the end, Bruno knew that he had failed to bring change where change was needed the most – in the jungles of Sarawak. Bruno himself said that his efforts were having a ‘less than zero’ effect.

NAH, BACA:
What do young people in Kelantan think of PAS? We ask 6 of them In 2000, Bruno Manser attempted to reenter Sarawak again. Leaving from Kalimantan, Indonesia, he trekked his way back into Sarawak thru the thick jungles.

After some trekking, he and some friends reached the Sarawak-Kalimantan border. From there, only Bruno and a Penan man named Nari continue the trip. Meanwhile, Bruno wrote a postcard back to his girlfriend in Switzerland. In it, he complained of a broken rib. Bruno tells Nari that he only needed to follow him up til the nearest mountain, and that he wanted to climb Batu Lawi alone. After that conversation…

That would be the last time anyone saw him alive.

Over the years, many groups worked together with the Penan to find Bruno Manser, but until now, there have been no traces of him or his backpack. There have been rumours that he’s gone into hiding or that there was foul play, but nothing concrete til now.

On 10 March 2005, a Swiss court officially declared him legally dead.

But the Bruno Manser Fund is still alive and kicking 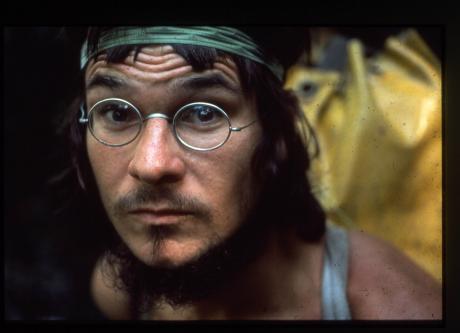 Image from the Bruno Manser Fonds

One thing Bruno managed to do before he disappeared to form the Bruno Manser Fonds (yes it’s spelled ‘fonds’ #becosswiss) or BMF for short. Set up to help the conservation effort in Sarawak, the Bruno Manser Fonds is ‘committed to campaigning for the conservation of the threatened tropical rainforests‘ and to ‘strive for the respect of the rights of the rainforest dwellers‘. If ugaiz are interested, you can check out their website here.

The BMF are still active now too. They recently made some headlines by calling for Leonardo DiCaprio to return the money that he received which was linked to the 1MDB scandal. The BMF have also been protesting the actor’s plans of building a marine resort in Belize. On top of that, they’ve also successfully campaigned to halt the construction of a dam in the Baram region of Sarawak, as well as starting up a conservation initiative in the area.

Altho the ways in which he disappeared remains a mystery, what is not a mystery is the dedication Bruno had towards helping the Penan people. His passion to help those in need should be an inspiration to us and his goals could still be achieved if we come together to help shed light on the plight of the Penan people and the extent of the devastation of the environment in Sarawak.

And perhaps, quite sadly, it took a mat salleh from Switzerland to make us care.

Co-written by Raymond Saw and Chak