So recently, our friendly neighbourhood MP Khairy Jamaluddin has been openly calling for the disbandment of the Council of Eminent Persons (CEP).  He claims that the CEP has been overstepping its boundaries by giving orders instead of suggestions to the PM.

But what exactly is the CEP supposed to do? Well, the council was created by Tun M shortly after GE14 to provide him with vital “knowledge or previous knowledge of administration”, with the new government having “little or no experience in running a government”. Furthermore, the CEP is only supposed to be around for the first 100 days. Um, actually what powers do the CEP have?

The interesting thing about the CEP is that no other advisory board has been formed like this before. Sure, the PM has created councils to advise him before, but usually the whole cabinet approves it first. In the CEP’s case, the council was formed wayyy before the Cabinet was fully announced which is what KJ has been stressing on la.

“It is not a legal entity and it was set up before (the full) Cabinet (was formed), therefore it’s the PM’s decision. He can at any time dissolve it.” – Khairy Jamaluddin, NST, July 24, 2018. 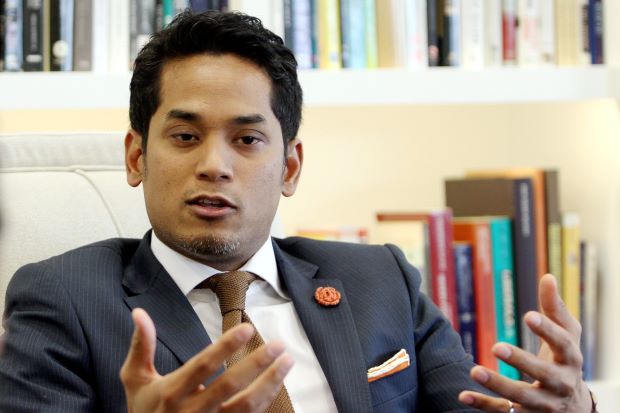 “What are these unelected old people doing here?!” Img from the Star

According to Tun M though, the CEP is ONLY there to advise him and have no official authority.

But why would Tun M want these people’s advice?

Turns out, all the 5 members are highly experienced in the finance and economic field and could provide valuable input in improving Malaysia’s current economic situation (debt-wise).

“This panel of ‘old timers’ and experts in matters of economy and finance is truly experienced. The government can make full use of their expertise in solving any issues that may crop up.” -Tun M, NST, May 12, 2018.

While doing research on the members of the CEP, we found something pretty interesting…

All of the members have at some point in time, had a falling out with the ruling govt

The former finance minster who served twice under Tun M’s 22-year tenure, Tun Daim is said to be the ‘mastermind who extracted Malaysia from economic turmoil’ back in the ’80s and ’90s. He generally had a good rapport with Tun M but he was recently sacked from UMNO for appearing at a Pakatan Harapan rally with Tan Sri Rafidah Aziz.

She’s the ex-Bank Negara governor, the first woman in this position and she’s also been accorded ‘Grade A’ among world’s central bank governors 10 times. We’ve actually done a whole article on her contributions towards the Malaysian banking system. Her ‘Grade A’ award for best governor comes based on this criteria:

“the central bankers are assessed on their determination to stand up to political interference and their efforts at influencing their government on such issues as spending and economic openness to foreign investment and financial services.”- Global Finance, 27 Aug 2013.

And of course we remember the recent developments of the 1MDB issue where Najib apparently asked Zeti to give him a green light on the transfer of RM 2.6 billion into his personal account but she refused and instead slapped a RM 53.7 million fine on AMMB Holdings Bhd for “non-compliance with regulations”. 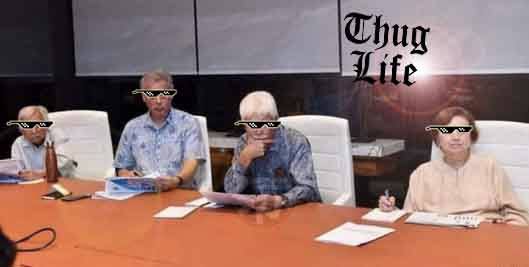 Look at them. Just sitting there, being cool. Img from Malaysian Digest.

He was the Petronas CEO and president for 15 years, making it what it is today. Now he’s the chairman of a bunch of other companies worldwide. He left Petronas back in 2010 after Najib did not renew his contract. Why? Because Najib suggested this guy named Omar Mustapha – who was previously Najib’s aid – to be appointed to Petronas’ board and the board refused.

“Appointed by Mahathir, the 59-year-old accountant by training had considerable freedom before the clashes with Najib. Mahathir said Hassan often said ‘no’ to his suggestions,”-Reuters, July 2, 2012-

He’s the richest man in Malaysia and is also known as the ‘Sugar King‘. What’s interesting is that in his latest memoir, the 94 year old (yes, older than Tun M) billionaire has been rather critical of the Malaysian gomen for favouring the Malays and Bumiputeras in their economic policies (#nofilter). The earlier picture of the CEP no Robert Kuok, so here he is. Image from Says

He’s a prominent Malaysian economist who has written and edited close to 50 books on Economics. He has also served in the United Nations for a decade fulfilling different economy-related roles.

Prof Jomo came under fire back in 1998 when he wrote an article on Wall Street Journal openly criticising Tun M for putting Anwar Ibrahim in jail and even got sued by Vincent Tan for RM 250 million because his article claims that Vincent Tan got his contracts as he was a government crony. Even after being sued, Prof Jomo refused to edit any parts of the article. The suit was later dropped.

We can see that all the CEP members have one thing in common: being a total bada**. They all seem to hold their ground when it comes to doing the right thing which is probably why they earned Tun M’s admiration and respect.

How the CEP members stand up to Tun? Gif from Giphy.com

But if they’re such smart respected people, why are people against the CEP!?

Well, there have been concerns raised that the CEP mayy be overstepping their jurisdiction considering that they are not elected representatives. There was the issue of them calling the former Chief Justice to resign which struck a nerve with some of the MPs.

“It is a basic hallmark of any democracy that the executive does not interfere in the affairs of the judiciary… There is nothing wrong with criticising the appointment of the CJ and PCA, however, it is quite another matter to summon them and demand their resignations, this is plainly wrong,”- Ramkarpal Singh, Bukit Gelugor MP, MalayMail, June 13, 2018.

Basically he’s saying that we can’t just suka hati give power to people la… Forming a council and giving it powers even though we have bodies and ministries to make these decisions would be disregarding the constitution. This is in accordance with what Tun M has been stressing on as well, which is the ‘rule of law‘. UMNO member Datuk Lokman Adam has also suggested that the CEP is doing business by jacking up prices for projects that purportedly would be cancelled i.e. the ECRL where they projected the cost to be RM81 billion instead of the initial RM55 billion and claims that Vincent Tan later made a profit of 30% in just one week because of the insider information he received from the CEP.

There’s also a comparison of the CEP to the Pas Ulama Syura Council, which has the ultimate say with unlimited and unchecked powers. Already with Zeti being appointed the chairman of PNB and Sime Darby Properties has caused even among netizens. Hmm… so the CEP could easily turn into a super villain if left unchecked. But how likely is that?

According to legal experts, the Cabinet ministers are not obliged to act on the team’s counsel and can make their own decisions since they the ones who are answerable to the Parliament (and ultimately the rakyat).

Political experts also believe that even though Malaysia is in an unprecedented territory, the CEP doesn’t pose a threat as the main purpose of its formation is to tap into the wisdom, experiences and competence of unelected leaders (non-political except for Daim), and to assist the new government before the full Cabinet was formed seeing that many of the members would not have administrative experiences.

So long story short, Tun M claims that he needs the CEP for advice but people are worried that the CEP may become gila kuasa and give birth to new cronyism. Which makes sense la, you have the PM’s ear next to you and there’s a high chance he’ll listen to your suggestions. Somemore so many companies now making you chairperson because you have gomen influence. How now brown cow?

Buuut… Since Tun M said the CEP will only be around for 100 days, and Tan Sri Zeti has claimed that they are in the midst of working on a lot of plans for the country, perhaps it would be better to wait and see what Tun M has to say when the 100 days are up (21 days left as of the date of this article, Malaysia Today actually has a live countdown clock running). Beside, our MPs seem to be doing a good job in keeping the CEP in check.

“At the end of the day, the final decision makers are the Cabinet and the Parliament which approves key decisions including budget, not the CEP. Therefore this does not pose a challenge to democracy,” Dr Wong, Malaysian Digest, 12 July 2018.

Share this article:
NAH, BACA:
Who are the 11 men who escaped China and tried to run to Malaysia? We find out.