If you don’t know who Tan Sri Zeti Aziz is, maybe this picture will help. Yeap, she’s the lady that signs off all our Ringgit notes. But she’s more than that. She’s the 7th and current governor of Bank Negara Malaysia (BNM), having been appointed to the position in May 2000. She’s the head of the bank whose role is to basically make sure that our country’s financial situation is in a good enough shape to grow economically.

And if all goes well, Tan Sri Dato’ Sri Dr. Zeti Akhtar Aziz, who has actually been the governor of BNM for the past 16 years, has said she would retire at the end of her current term in April 2016. However, for such a huge figurehead of the country, in the midst of all the 1MDB, RM2.6B, NSC, or TPPA,  news of her retirement seems to be a bit low-key.

[Update 24/3/16 Even now when she’s just one month away from retirement, it doesn’t seem like she’s slowing down in any way. She recently announced that Bank Negara Malaysia would be taking ‘administrative action’ against 1MDB! Head on to point 4 to read more about it.]

So it’s okay if you don’t know much about her, we didn’t too. And in looking up on her tenure as our central bank’s governor, we found that there are a couple of really interesting things about the woman who pretty much transformed the Malaysian banking system.

1. She’s one of the top 9 bank governors in the world! (We even beat
Singapore!)

In 2014, Global Finance magazine had given Zeti a ‘Grade A’ rating for the 11th consecutive year. This picture was taken during her FIFTH award. Image from The Star.

And before you go like, “maybe it’s just easy to get a Grade A”, last year’s list only saw 9 people out of 75 receive that grade!

Global Finance also awarded her the title of “World’s Best Central Bank Governor” in 2005 for overseeing successful financial reforms in our country.

Besides that, it was also recently reported that she would receive the Lifetime Achievement Award at the Central Banking Awards 2016 (yes, them bankers have their own awards as well) for her roles in overcoming the 97/98 Asian Financial Crisis (she was acting governor for a short time, but we’ll talk about it more in the next point), amongst other things.

“History looks set to judge her more favourably than her critics and, over time, the International Monetary Fund has moved closer to Zeti’s way of thinking. Zeti was the leading role model for middle-income country central banks.” – Central Banking Awards committee chairman and Central Banking editor-in-­chief Christopher Jeffery, as quoted by The Star

In a nutshell, the 1997/1998 Asian crisis was a financial and economic crisis that started in Thailand and eventually spread to the rest of Asia.

But if Zeti’s job is to make sure we’re in good shape financially, some of you probably already going like… “Although there are similarities in the movement of the ringgit between 1997/98 and today, the stark contrast is economic strength.” – Columnist Jagdev Singh Sidhu, in an article for The Star

In another article from 2010, he also elaborated on the reforms she implemented to build our banking sector. Those reforms were put to the test during our recent Ringgit slide, when certain people started calling for the Ringgit to be pegged again.

Zeti however, was confident that Malaysia would not suffer same fate as back then. Click to read her explanation on why it’s different from back then. Image from The Star.

And it seems that people agree with her. In a previousur article, we spoke to a couple of people about our Ringgit, and they agreed that our economic situation now is nowhere close to our 1997/1998 crisis because of the stuff BNM had done since then.

It’s not to say it’s a bed of roses right now for us la. We still have our issues but this is to just point out that it’s a new, different, set of struggles, one that may have been beyond the control of BNM and Zeti, something that Zeti herself has hinted at.

3. She was the first female (and second longest serving) governor for BNM

Prior to Tan Sri Zeti Aziz, Bank Negara Malaysia had always had a male as its head . And as it turns out, not many of them ended their terms on very good….notes (pun intended). 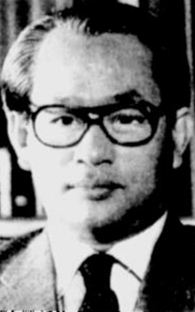 We found 2 articles (here and here) that talked about past governors of BNM. Both of them seemed to point out that the relationship between the gomen and BNM started to deteriorate in the early 1980’s during the tenure of the 3rd governor. We’ve listed down below the tenures of the 3rd-6th governor.

NAH, BACA:
Chup. This green tea from Cameron Highlands...IS MADE IN CHINA?! We couldn’t find a picture of when she was appointed as governor, so here’s a picture of her during another momentous occasion in her life, with her mom second from left and dad on the right. Image from malaycivilisation.ukm.my

4. Her work has been described as jihad (the good kind).

Malaysian Islamic Youth Movement president Amidi Abdul Manan defined jihad to be doing things to the best of your ability, and it’s applicable to many different areas of life including politics, society and even economics, which would make sense if applied to the FB post below.

But the person who posted this, Perlis Mufti, Mohd Asri Zainul Abidin (also known as Dr. MAZA), doesn’t specify what he meant by “menyelamatkan negara dari para pengkhianat dan penjenayah”. Many of the comments from people however,  indicate that it could be due to her voicing out on 1MDB.

[Update 24/3/16: She also recently said that BNM would be taking ‘administrative action’ against 1MDB because they haven’t given reasons for why RM7.76 billion was still in other countries and not in Malaysia. But she also adds that what would probably happen is 1MDB getting fined for this. Still, how many people in Malaysia can speak up about 1MDB and get away with it? Our DPM certainly didn’t.]

Zeti Aziz has also been commended by the Islamic Banking Sector very often. This article mentions how she has been a huge supporter of the Malaysian Islamic Banking sector and paved the way for many women, Muslim and non-Muslim, to hold various top positions in banking.

“In Malaysia’s case, Zeti has been a strong pillar and anchor of solidity, wisdom and training in Islamic finance and we owe it to her, if nobody else.” – Christine Lagarde, Managing Director of the IMF

However, her biggest achievement in this regard was probably in 2012 when she was awarded the Islamic Development Bank Prize in Islamic Banking and Finance, for her contributions to the development of Islamic banking and finance. 5. She made the banking system untouchable from politics

How many of us would have heard of this act known as the Central Bank of Malaysia Act 2009? Passed a few months after Najib became PM, the purpose of this act is “to address the issues and challenges that are confronting Central Banks in this rapidly changing environment.”

It’s a long document but one article says that this act could be the greatest thing that Zeti has done for BNM.

“Her pièce de resistance as a central banker came in a 2009 act of parliament when Zeti secured BNM’s independence from the government, no mean feat in a country not known as a model liberal democracy.” – Columnist Eric Ellis, in an article for Euromoney

The article didn’t elaborate on what was in the act that made it so special, but our friend Alvin Vong, from EquitiesTracker (who has helped us in many of our previous articles) tells us one of the biggest things about the act was that only the Agong would be allowed to remove the governor of BNM. And the PM can only terminate the appointment of a DEPUTY Governor. Screencap from bnm.gov.my, page 23.

It definitely came in handy last year when almost anyone was either getting promoted or fired, especially with reports that certain people allegedly wanted to get rid of her. The act may have also been instrumental in allowing her to say stuff like this.

“For the Central Bank we believe it is very, very important to comply with our rules and regulations that we have in place. This is vital, it’s critical for the functioning of the financial system and its integrity.” – Tan Sri Zeti Aziz, on why BNM had to revoke 3 permissions they gave to 1MDB to invest overseas, as quoted by The Star

But of course, all this is aside from the other things that this act allows Bank Negara Malaysia to do.

In times when things seemed uncertain, maybe Zeti was the hero behind the scenes all along

Even as she approaches her retirement, we see that the effects of her time as governor will be felt for years to come. Especially since she’s not just been preparing post-retirement plans for herself, but plans for the bank as well.

“We have a succession planning. This reflects the solidity of the bank. And I do believe we have a candidate to succeed to become the governor.” – Tan Sri Zeti Aziz, as quoted by New Straits Times The 3 current deputy governors of BNM. Zeti was deputy before becoming governor, so it’s possible the next one could be one of these 3. Image from The Rakyat Post.

[Update 24/3/16: It’s about a month before her retirement. Her successor hasn’t been selected yet, but this is what she has said about the 3 people in the picture above.

“We invested in all of them massively and I don’t want to lose a single one of them.” – Tan Sri Zeti Aziz, as quoted by The Malay Mail Online

Which shows just how much confidence she has in them. The gomen may be a bit misguided if they decide to appoint someone else.]

But it’s not just a good succession that she wants. She mentions that she did consider an earlier retirement but chose to finish her term because of the current situation.

“I decided that I will stay with the bank because, if there were any issues, I would like to hand over to my successor a clean slate. I did not want him or her to be bogged down by cleaning up any problems they have caused so I made that decision that I would stay whatever the cost to me personally, that I would stay to do the job.” – Tan Sri Zeti Aziz, in an interview with Euromoney

Even in the midst of GE13, this article reports that when things were politically uncertain, Malaysians could count on the leadership at BNM (at least on a financial level).

And as we approach the end of her tenure, it seems fitting that she would say this.

“I would have completed 16 years in office by then (April next year), and 34 years with BNM. I’ve done most of what I set out to do, and BNM is a solid institution.” – Tan Sri Zeti Aziz, as quoted by The Malay Mail Online Image by Charles Pertwee on Bloomberg.