Most likely, you’d have read some news about the feud between UMNO and MCA after Minister of Tourism and Culture, Nazri Aziz insulted Malaysia’s richest man: Robert Kuok a few weeks ago. The whole war of words actually started because of an article published by Raja Petra Kamarudin, the owner of Malaysia Today blog.

In the article, Raja Petra accused Robert Kuok of attempting to overthrow the government by channeling large amounts of money to the opposition party. Not only did it get the attention of UMNO and MCA, Robert Kuok himself caught wind of the article, and he was even considering taking legal action against Raja Petra.

But in case you didn’t know, this is far from the first time that his writings had caused stirred controversy. In the past, he’s made some pretty big accusations against Tan Sri Apandi Ali (Attorney General of Malaysia), Clare Rewcastle-Brown (Editor of Sarawak Report) and even Rosmah Mansor (you probably know who this is) herself.

Seems like he’s made a few enemies. Gif from giphy.

But, who exactly is Raja Petra? How did he go from an opposition supporter to being labeled a traitor? Our friends at SOSCILI dug around to find out more about the man behind the blog.

As the eldest child of Raja Kamarudin Raja Tun Uda and Barbara Mabel Parnell, Raja Petra is actually a member of the Selangor royal family. After finishing primary school in Alice Smith School KL, Raja Petra was sent to Malay College Kuala Kangsar as per family tradition. But because his BM wasn’t very good, and spoke with an English accent, he was always bullied by the other kids.

“In the first few weeks I cried every night and wrote home almost every day asking my father to take me out of that school.” – Raja Petra Kamarudin, quoted from his blog

In form 3, he was finally transferred to Victoria Institution KL. There, he met friends of all race and religion, including his future wife a few years later, whom he married when he was 22. But it wasn’t all rainbows and butterflies after the marriage.

Raja petra is on the extreme right in the back row. Image from viweb.mysite.com

In light of his father’s death 2 years before Raja Petra’s marriage, he and his wife started a motorcycle importing business in an effort to support his mother and 3 of his younger siblings. His business was successful, and he moved to Terengganu as part of a decision to keep the business growing. His business was so successful (and famous), it made his family millions of ringgit.

But as Raja Petra himself confessed, due to the nature of his business, some contracts were only awarded to his company because of well placed bribes to certain officials.

“I was heavily involved in corruption because you could not get large government contracts unless you paid for them. I won probably RM100 million or so government contracts over those 20 years and towards the end we were doing RM1 million turnover a month.” – Raja Petra Kamarudin, quoted in an interview with Malaysian Outlook

Not wanting to continue in that culture, he moved back to KL and began writing as a cycling and motorcycle columnist with The Star. This was actually, the beginning of his transformation into a political writer, as his involvement in politics actually begun earlier than his motorcycle business.

He knew Anwar Ibrahim from way back when, and was among his first supporters

Raja Petra and Anwar Ibrahim met back in Malay College Kuala Kangsar (a.k.a the school he got bullied in), but because of Anwar’s tendencies to chide the British (we were in the early years of independence), he didn’t really like Anwar much (Raja’s mother waas a British woman). This was despite the fact that Anwar would stand up for Raja Petra when he got bullied by the other kids. 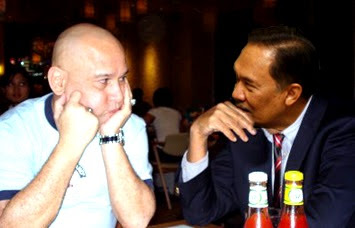 What did you say about my mother!? Image from gelombangrakyat.blogspot.my

However, when Anwar and others founded Angkatan Belia Islam Malaysia (ABIM) and became its second President, Raja Petra was among his many supporters. Raja Petra attended many of Anwar’s speeches when he was President of ABIM. Anwar’s speeches (and perhaps his charisma) inspired Raja Petra to see the future in Islam, and he fashion himself a “radical” Muslim.

Then came Anwar’s bombshell decision to join UMNO despite being supported by PAS all the while, purportedly to change the party from the inside. Though Raja Petra did not follow him into UMNO, they still remained friends, and he even helped Anwar win the UMNO youth chief seat in 1982. But while Anwar was climbing the UMNO leadership ladder, Raja Petra took a different path. 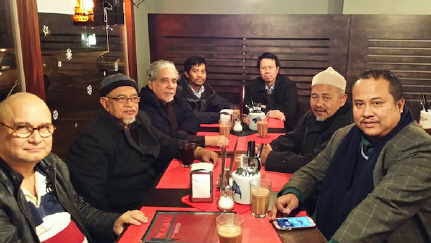 Raja Petra with Hadi Awang and other PAS big shots in UK. Image from darulehsantoday.blogspot.my

Raja Petra became acquainted with members of PAS, and among them was Haji Abdul Hadi Awang, the current President of PAS. He became enthralled with Hadi’s sermons and speeches, and regarded Hadi as his Tok Guru, even organising talks for Hadi to speak in KL. But then came a crucial moment in time where Raja Petra had to choose between his friends.

NAH, BACA:
5 news stories you would never have seen on mainstream media before GE14

In the 1986 General Election, Anwar asked Raja Petra to help UMNO campaign in Terengganu. Raja Petra agreed, and as a result, Hadi lost the Marang seat to Rahman Bakar (nicknamed “Giant Killer” for defeating Hadi). But by the next election, Hadi retook the seat, and Raja Petra “retired” from the scene. This was when he got into writing about politics, and soon, became thrown in politics personally.

He was arrested for supporting Anwar, and accused many famous political figures of conspiracies 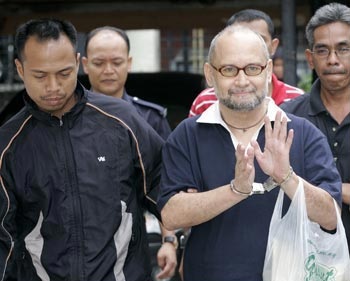 Because shopping at Giant is a crime. Image from from dinmerican.wordpress.com

As you all know, Anwar was a pretty central figure in the whole Reformasi movement that erupted in 1998. Consequently, a handful of his supporters were detained under the Internal Security Act, and Raja Petra was one of them. He was arrested mainly for his role as the Director of the Free Anwar Campaign (FAC), a position he held until Anwar’s release in 2004.

In a 2016 article, he revealed that he was barely paid at all for his services as the Director of FAC, even thought they originally promised him a monthly salary of RM7,500. However, he told a different story in 2012 of how he was compensated for his services, so… no one really knows which one is true.

After Anwar was freed, he could focus his attention on his Malaysia Today website, and thus became more active as a political activist in Malaysia. In Malaysia Today’s early years, his articles were visibly (and understandably) pro-opposition. Among his more famous works was an entire series of articles on Khairy Jamaluddin, which accuses Khairy of manipulating his father-in-law/ former PM Tun Abdullah Badawi for his personal gains.

He’s even taken credit for the opposition’s GE12 results, which denied Barisan Nasional a 2/3 majority in parliament. But perhaps the most explosive of his accusations his article about Rosmah Mansor’s involvement in Altantuyaa’s murder. This not only lead him to be investigated and charged under the Sedition Act, but it ultimately forced him to leave Malaysia for the United Kingdom, and he has not returned till this day. As in compelled by mysterious forces and transformed into an opposite version of himself, Raja Petra denied all his allegations against Rosmah in an interview with TV3 in 2011. At the same time, he also took the chance to criticise Anwar’s incompetence as the opposition leader, and he would never be Prime Minister because of his homosexual acts.

His more recent writings are strongly pro-government, as his articles about 1MDB seem to dismissed them as untrue and politically motivated. Even his old allegations/conspiracies (such as The Khairy Chronicles) have been taken down or removed.

Interestingly, Raja Petra had chronicled on his website the episodes of being monitored by Malaysian authorities while he is abroad in Thailand, Indonesia, and Singpore. In 2016, he laments that it is now the MACC that’s doing the spying, while it used to be the Malaysian Special Branch Officers.

“The fact that they tell me the photographs show I went to the spa together with my wife makes the information correct. And they even know how many times and which spa I went to.” – Raja Petra, quoted from Malaysia Today

Perhaps they had already gotten to him, as some believe that Raja Petra had been bought over by the ruling government, while others think that it’s Raja Petra is blackmailing them. There are also those who think that he is doing this in hopes that he might return to Malaysia some day. But according to Raja Petra himself, he says that he is a victim of fraud, and has become bankrupt because he wasn’t paid for his work with the Free Anwar Campaign. But when asked if he was being paid to write against the opposition government, Raja Petra simply said:

He also reveals that deep down, he was still a PAS supporter (and that he’s still close friends with Hadi Awang). But even deeper down, disagreements with Anwar over the issues like the Hudud Law and the Selangor Chief Minister also contributed to the rift in their relationship.

“And we have been warning him time and again that he does this at his own peril. However, Anwar refuses to change so we have no choice but to turn our backs on him.” – Raja Petra, quoted from Malaysia Today

In the most recent development, he has still yet to respond to the the letters sent by Robert Kuok’s lawyers, so we’ll just have to wait and see what  happens. Meanwhile, he’s already beginning his fresh rounds of attack on former minister Rafidah Aziz. So whatever motives he may have, it doesn’t look like he’s going to lose it anytime soon.