November has just ended, and if you calculate it right, that’s when all the babies made on Valentine’s Day were born.  Not only did this mean a whole lotta babies, but it also meant that a lot of working mommies  have traded in their heels and pencil skirts for baby bottles and diapers.

This is what we call a ‘maternity leave’ where mommies get to do their mummy duties. According to the law, maternity leaves in Malaysia lasts for 60 days, but it may go up to 90 days next year. And if you didn’t know, yes, they still get paid during maternity leave.

Even though the gomen has allocated a stipulated amount of time for new mums to go on mummy duty, some companies go above and beyond to give their mums the break they deserve. In Maybank, a new mom can apply for up to ONE WHOLE YEAR of maternity leave – 3 months where the mother is paid her full salary, 3 months with a half-salary, and 6 months unpaid. Maxis offers 3 months paid, and 3 months half-paid, while Digi gives a 6-month maternity leave, fully paid for. 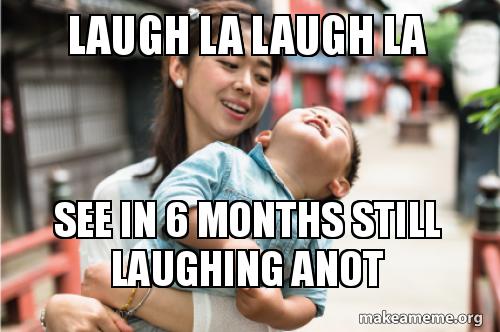 Motherhood isn’t easy, so having a longer time to get used to it definitely helps. Original image from Enfagrow

With the recent proposal to extend maternity leaves from 60 to 90 days to help mums be more “productive and dedicated” at the workplace, it’s clear that Malaysian mums get a pretty decent amount of leave. In fact, Malaysian mums even get more days off than moms in the US!

But even though mums get so much time to take care of baby, they also need time to take care of themselves, which is why most mums here have a season of pantang, or a confinement period so that their bodies can heal. In the midst of this, it can be pretty tough for any mom to take care of a newborn alone- which is where dad comes in, to give a hand in helping out with the new baby… while he’s not at work, that is.

But… do new Malaysian dads even get time off to care for their newborn?

Recently, IKEA Malaysia announced that they’ll be giving their new daddies a month-long paid paternity leave! No, we didn’t just typo the word ‘maternity’- a paternity leave works like a maternity leave, but for daddies. If you think about it, it totally makes sense that dads get time off to take care of their new baby.

Here’s a little known fact- there’s no fixed law about it, but gomen servants are given 7 days paternity leave, and some state gomen employees can even take up to 14 days off! This is a bit surprising because some private sectors only give one to three days, or even none at all 🙁 That’s why companies like IKEA and CIMB are so flexible in giving out paternity leaves- because the decision is made by them and not by the law.

But that’s super kesian for new dads in the private sector, because their paternity leave is at the sole discretion of their employer! Will they be fully-paid, partially paid or not paid at all? Heck, will they even get a paternity leave, or will they have to use their annual leave in order to visit their wife and baby on D-Day? Recently, the Ministry Of Women, Family and Community Development suggested that ALL dads -both those in the private AND the government sectors- should be given a 30-day paternity leave, saying that it would “create good bonding between the parents and their children“.

Sounds legit right? But then, not everyone is 100% on board with the idea. The Malaysian Employer’s Federation (MEF) not only is against the proposed 90-day maternity leave for new moms (even though studies show that moms need a year to fully recovery from childbirth), but say that the proposed one-month paternity leave will “only serve to burden employers”.

So maybe that’s why here don’t really have the concept of paternity leave la. Plus, it’s something that’s only started being implemented in Western and Scandinavian countries from the 2000’s (in these countries it’s usually called parental leave), so Asian countries are just getting on the paternity leave train. We already know about Malaysia, sooooo…

So how does Malaysia compare to other countries in our region?

Most Asian countries give a pretty standard amount of time for new moms to recover -around two to five months-, but for dads it really fluctuates. Essentially, Asian countries are very… undecided, to say the least, when it comes to how much paternity leave they give out to their new dads. Here’s how it looks like for a few ASEAN countries, from least to most: Much leave, such rest! Original image from NWI

Um did we miss out on a 1 before the 0? No wor… they really don’t get any days off. 🙁 There’s no such thing as a paternity leave in Cambodia- at least, it’s not in their Labour Law. Some companies might choose to give their new dads a day off, but that’s about it.

Eh so how then my baby is born while I’m giving a presentation??? In that case, dads can apply for what’s called a special leave, which, if you’re wondering, is different from an annual leave. A worker is given seven days a year to take leave for reasons that involve their immediate family, like if someone in their family died, if they’re getting married, or in this situation, if their wife is having a baby!

So technically… if the new daddy in question don’t take any other special leave all year and use all seven days to hang out with mum and baby, then he’d get a week of ‘paternity leave’, unless he wanted to save some off days for a rainy day.

NAH, BACA:
What kinda business can a woman start in KL for RM2000?

It sounds simple enough- a new dad gets a seven-day paternity leave, provided that he’s married and lives with his partner. There’s currently a push for it to be extended to 15 days. But for solo parents, the rules are a bit different.

EY WHAT IS A SOLO PARENT? Ok, a solo dad in this case would constitute of the following:

Whatever the definition, a solo dad is a super dad in our books! GIF from Giphy

So in this case, a solo dad will be able to apply for a seven-day paternity leave PER YEAR, EVERY YEAR until their child turns 18! What’s better is that this leave can be spread out, so they can choose to take leave on important days like their kid’s graduations or first days at school! This same benefit is also given to a parent of a child who has disabilities.

Singapore comes closest to the concept of parental leave that Western countries have. In the beginning of 2017, it was announced that new dads will be given a two-week paternity leave, and after that they can also choose to share four weeks out of the sixteen weeks that his wife would get to share. With the additional one week of childcare and another week of unpaid infant care leave, a father can get a total of eight weeks to be with their new babies!

So what does shared parental leave mean? Ok we use durian for example. Imagine the Singaporean gomen giving new parents 16 durians to share- but from the 16, a new dad can only take a maximum of four. So he get to decide whether he takes all four, leaving 12 for his wife; or taking less durians to leave more for his wife. Replace durians with leave weeks and there you have it. This is a concept that’s done in many Scandinavian countries like Sweden. . a little different in the fact that there’s a limit to how many weeks parents can share, so dads can choose to not take all four weeks, and let his wife take more of those weeks instead.

A bit embarrassing la this writer had to Google how many months 53 weeks translated into but OMG it’s like one whole year ugaiz! South Korea, followed by Japan (come on la Southeast Asia!) actually give out the most paternity leave weeks in the WORLD, by a whole lot! Look look: You’d think that then mums sure will get one year also right? Plot twist… mums only get 90 days maternity leave! What is this?!?! The story is lidis– employers weren’t giving women higher roles in the workplace because they knew they’d take time off to take care of their children. So women, besides not being given promotions, were also having less kids so that they could stay at work! 🙁

So South Korean President, Park Geun-hye, decided to give dads a longer paternity break so that more babies could be made and more mummies could get better jobs! That being said, only 5% of new dads actually take the leave, and even less take the whole year off, because employers (and workers) just aren’t used to that culture.

In reality, many dads are hesitant in taking extended leaves…

Earlier we mentioned how the Ministry Of Women, Family and Community Development said that the 30-day paternity leave pitch would help a dad -and ultimately, the whole family- bond with their babies. Studies show that a paternity leave actually helps dads play a more active role in their lives, both in the diaper-changing stage all up to when they’re graduating high school. And if dad follows up with staying involved in their kid’s lives, in the long run it helps kids stay in school, stay married, all that good stuff!

Speaking of high school, dads who stick around when baby has just made their appearance actually end up being a lot smarter! Babies with involved daddies in their lives have brains that just develop better, and will be more prepared for school by the time they hit pre-schooling age- not all kids are necessarily prepared.

Kiddos aside, having dad around helps mum focus on recovery and her career. A study found that dads who aren’t there from the start end up with wives doing double the housework, even though both of them are doing full-time jobs. 🙁 So having a paternity leave in place helps mums be the strong, independent women they’re made to be!

But at the same time, it’s understandable why dads shy away from taking a paternity leave. Dads who leave work usually face criticism from both co-workers and employers, not getting promotions at work and struggling in their careers as a whole- even if it’s the company’s policy to give out a paternity leave. Some companies think a dad is more feminine for doing so. Whaaattt???? Oklah makes sense also like that means if dads don’t want to take paternity leave! That is the question. Original image from Bula Revista

However, as times change, paternity leave -and the idea of parental leave as a whole- is becoming increasingly accepted in Malaysian society, with more and more employers jumping onto the bandwagon. In this day and age, it’s looking more and more like a necessity, but getting dads to actually apply for paternity leave is a whole other story completely.

So at the end of the day, given the amount of paternity leave that dads are given, it’s really up to both parents to see how long daddy should stay at home with baby, if at all. After all, only a parent would know what’s best for their child.