Remember when Prime Minister Muhyiddin Yassin announced a Movement Control Order (MCO) starting from the 18th of March, 2020, then we all thought that it’d be over in two weeks and we could all go back to our lives? Well, as you can probably tell it didn’t turn out that way, given that it’s already been two months.

Granted, it’s now been lifted to a conditional MCO (CMCO), but you know, there are still things that we can’t do, like organizing wedding receptions, going for a movie at the cinema, or traveling. And the travel ban’s been making things hard for quite a lot of people, such as tourism, the oil industry, and perhaps especially for migrants.

Now here’s the part where you’re probably wondering: Wtfbbqptptn is a rat lane?

Rat lanes are kinda like holes in Malaysia’s borders

No, not like this, and certainly not as glorious. GIF from Tumblr

They’re also occasionally known as ‘rat trails‘, or in Malay, lorong tikus. It probably has something to do with how rats tend to get into houses and buildings thru side holes, instead of just knocking on the door and asking for permission to enter.

We don’t really know for sure why it’s called a rat lane, but one of the earlier and more infamous examples of it are the ratlines, a system of escape routes for Nazis and other fascists to flee Europe after their major loss in World War II. The main route used was to go through Spain, where the Spanish administration was said to have turned a blind eye to the stuff that the Nazis had done and helped them set up a series of routes out of Europe.

“The ratlines were not a thoroughly structured system, but consisted of many individual components. It was more of a spontaneous cooperation of different institutions that gradually established itself after World War II.” – Historian Daniel Stahl, as quoted from Deutsche Welle The system of ratlines. Image from Alchetron

So, you know, from ratlines meant for Nazi criminals, came the concept of rat lanes for smugglers and illegal migration.

A rat lane’s usually a path that’s relatively not monitored and used as entry or exit points for illegal migrants or smugglers to sneak past a country’s borders.

“The fence is rusty and can be easily cut. All the CCTV cameras are located in Padang Besar while in Bukit Kayu Hitam, the security line is protected by only a barbed-wire fence.” – Former Batu Kayu Hitam assemblyman Ahmad Zaini Japar, as quoted from The Star

Illegal immigrants tend to use rat lanes to avoid paying for and going through the legal process with the Immigration Department. And apparently, if one’s coming from Indonesia to Malaysia, using a rat lane allows them to do that in just fifteen minutes – there’s apparently a route that connects Tanjung Setapa in Johor and Pulau Batam in Indonesia. But, uh, don’t do that, since it’s haram and all that. A hole in the wall, so to speak. Image from Persatuan Penduduk Jalan DC2

In the past, authorities have been trying to shut down the use of such illegal paths leading in and out of Malaysia to our neighboring countries, but to no avail. For example, there are guards posted at different points along the fence that separates Malaysia and Thailand, but these guards can’t be everywhere, so smugglers or illegal immigrants will find loopholes in between and cut a hole where there’s usually no one watching to enter the country.

NAH, BACA:
M'sians share how badly their internships were affected by the MCO

At one point, a government official even suggested building a concrete wall instead of using fences as a way to curb illegal migration and smuggling through rat lanes.

“We should replace it with a concrete wall which is sturdy and easier to maintain.” – Ahmad Zaini, as quoted from The Star

We have this filed under “GIFs you can hear”.

Rat lanes cause a lot of trouble for Customs too 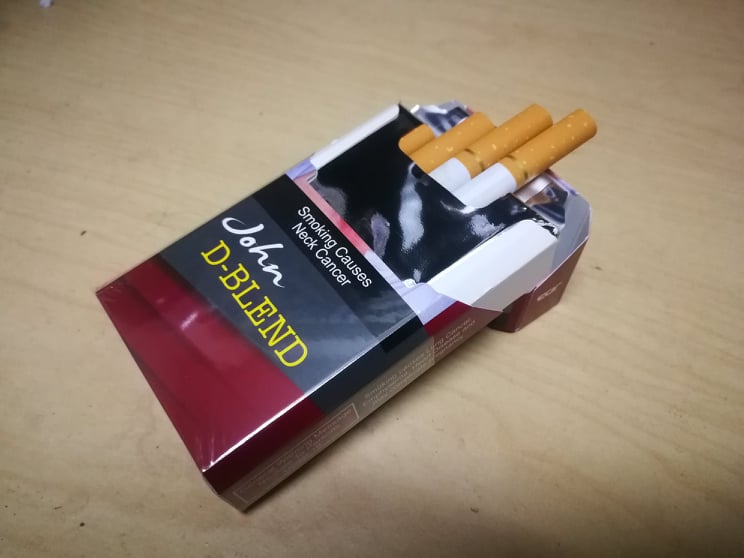 Definitely no one in our office smokes illicit cigs. Definitely.

It’s bad enough that cheap illicit cigarettes have caused an increase in new smokers who can afford these ciggies over the real deal. The rise of smuggled cigarettes thru rat lanes also means that Malaysia loses over RM5 billion a year in uncollected tax revenue just from illicit cigarettes.

“If border security is not tightened, the prevalence of illicit cigarettes in Malaysia will become more entrenched after the MCO period that it would be next to impossible to dislodge,” – Rohan Pike, illicit trade advisor, as quoted from NST

In 2017, there were even reports that weapons were smuggled into the country from Thailand through rat lanes, which was said to have contributed to some shooting cases.

“The armed forces concurred that there had been many occasions when their soldiers came face-to-face with smugglers along rat lanes at the Malaysian-Thai border.” – Former Deputy Director of Enforcement at Ministry of Domestic Trade and Consumer Affairs Mohd Roslan Mahayudin, as quoted from NST

Due to manpower and resource limitations – especially during the MCO – it seems impossible to control every inch of Malaysia’s border. However… Recently, there have been increasing reports of the government arresting undocumented individuals trying to sneak into Malaysia using the rat lanes. As of 16th of May, 2020, it was reported that as many as 1,408 undocumented immigrants were caught using the so-called rat lanes to enter Malaysia.

This is concerning especially in a time where Covid-19 can spread so easily. And that’s why the government has doubled patrol units around our country borders to ensure that no one can sneak past. It does appear tho that the govt has at least tracked down most of the rat lanes in the country, and are ready to take some action about it. For instance, the govt has even deployed drone surveillance over areas that people can’t monitor as a way to cover more ground at our borders.

Given that the MCO’s been rather successful in significantly reducing Covid-19 cases locally, it’s hoped that the increased surveillance and border patrol can do their parts in preventing a ‘rat lane’ cluster, so as to maintain the current low level of our Covid-19 cases.