To Malay-Muslims in Malaysia, dogs are like kryptonite: you do not touch them. Growing up, they have been told by parents and teachers that dogs were dirty and dangerous and full of Haram. Judging from the perception, you’d think dogs were radioactive and that touching them would turn your hand green.

Obviously, this makes dogs an unpopular choice of pet for the Malay community. Any interaction with dogs will probably be brief, and the most memorable one will probably be the one where this really big stray dog chased them down the road. So dogs = vicious and Haram. This is an unfair perception. It’s like sitting in a Proton once and thinking all cars are like that.

Then yesterday’s “I Want To Touch A Dog” event happens, and we, like scientists, decided to bring along a  test subject with a phobia of dogs confronts his fears. (More on that in a bit.)

I want to touch a dog!

The event, held recently at Central Park, Bandar Utama, was an event to help people overcome their fear of dogs, Muslim or not, and how to practice ‘sertu’. According to the organizer, Syed Azmi Alhabshi, it was not meant to be as big as it was. It was initially planned to just be a small gathering for him to overcome his fear of dogs.  The original Facebook invite list was just him, volunteers who would bring their dogs, and a pair of balls.

Syed, who used to go by the hashtag #TamakPahala, was inspired to do this after watching Jason Lim’s short film ‘Are You Blind?’, which showed the difficulties faced by the blind in Malaysia with seeing-eye dogs.

“I was not so happy with how they were treated, but I thought that if I were in their (the public’s) shoes, I too would stay away from the dog as I am scared of it. In the end, I know I should face my fear as I am ignorant about them,” Syed Azmi The man who started it all. Image taken from Syed Azmi’s Facebook profile.

Doing something like this inevitably invited polarized opinions, as Syed shares:

“The reactions were mixed. My abah and mummy and siblings are superb. They are supporting me all the way. That is my moral compass. Most of my extended family members kept mum about it, and I think they are being kind. Close friends are amazing, total opposite (opinions) on both ends. But in the end, it’s my choice and I’m sticking to it. They are still my friends, though. We agree to disagree.”

“Strangers are supportive. More good than bad and that is okay. I can’t talk about them as I do not know them. (On) Facebook and media, well, the bashers and haters are there for a reason and I respect their views. So far nothing physically dangerous (has happened), just words. You can’t make everybody happy.”

“Dude this article is so long already and I read this yesterday on The Rakyat Post!”

Here’s what we meant about our test subject with a phobia of dogs. Like those detergent commercials that compare Sabun X with their product, I asked him what is his opinion about dogs, so I can compare it with his impression after this event.

He’s okay with dogs, as long as they don’t lick him. Or touch him. Or get too close to him. Why is that? Arief explains:

“My mum didn’t encourage me to play with dogs. She said that they’re fine, just don’t touch them because then you’ll have to clean yourself (sertu).”

“I was once chased by a dog. It was following me, so I thought that I would try to run away from it. It started running after me.”

Ah, the classic dog-chasing-give-you-phobia story. The staple of every Malay childhood.

We came to the event bright and early, dressed in yellow to signify that we would like to touch dogs. There was quite a sizeable amount of people in yellow, the majority of them Malays. For a moment, I thought that we were at a Bersih rally and at any moment, someone would jump out and shout ‘REFORMASI!’. 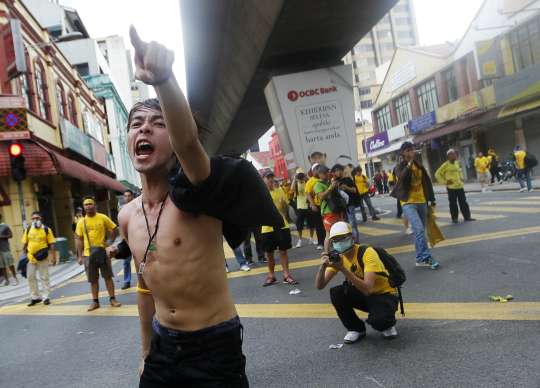 I guess he was really eager to touch a dog. Image taken from The Malaysian Insider.

Dogs were everywhere, safely leashed to their owners, and there were all kinds of them. Big. Small. Hairy. Poofy.

Arief was calm and collected as he made way through them. After listening to a short talk by an Islamic expert regarding dogs and the proper method to clean up after touching them, we finally reached the part we (I) were waiting for: touching the dogs itself.

As we were walking away from the talk, the coolness slipped a bit.

“Well, it’s just the culture (I grew up in) where dogs are meant to be out of sight, so now that you actually confront them, you don’t know what to do.”

So we eased Arief, bit by bit:

We decided to start with this little fella, Foxy, who belongs to a Randomly Selected Passerby That We Met Totally By Chance. Foxy’s owner decided to help encourage him to be more assured by giving a few motivational words.

And he did. Then he started to pet Foxy. Slowly, he became more comfortable. He started to look contemplative. I looked at Arief and waited for his response.

Well? What do you think?

And the worst possible thing happened. He said:

Okay? Seriously? All nonchalant, like touching a dog after all the cultural phobia and taboo and apprehensiveness instilled into him is no big deal.

WHAT DO YOU MEAN IT’S OKAY. WHERE ARE THE TRUMPETS AND THE LIGHTS AND A HEARTWARMING REALIZATION ABOUT DOGS.

2. Then we upped the stakes

Arief decided to challenge himself, and like Bruce Lee in Game of Death, we went around to look for progressively larger opponents (dogs). I mean, all he’s done is touch a dog the size of a cat. Anybody would be okay with that right? Considering that Clover at least 4 times the size of Foxy, I expect something interesting to happen.

So, what do you think of this guy, Arief?

We went through a few more dogs, but this time Arief was more eager to do it. The tentative attempts at touching were now more assured. None of that pussyfooting in the beginning. In fact, I think he was starting to enjoy it. “Yes pls, explore your fears more with me.”

I love his response after this moment he shared with Queenie.

So, what do you think now?

“They’re cool! I mean, I grew up with cats, and all they want is ‘Feed me’ or ‘Pet me’, then they go away. But dogs seem to have more personality. And you have this instant connection with them.”

Ok, this question may be out of left field, but did you at any point while touching the dog, wanted to touch a pig, or wanted to convert to Christianity/Judaism/Pastafarian?

So your akidah was fine and unmolested?

Sigh. How la. A Muslim touches a dog and nothing terrible happens. No PTSD flashbacks. No rush to a church to convert into a Catholic. Even got pics of him like BFF with dogs some more. How to make clickbait article title like that? “A Muslim Guy Touches A Dog And What Happens Next Is Just Okay”?

Are you telling me that touching a dog is no big deal, and that it’s totally safe, is actually quite fun, does not affect your morals, and cleaning up afterwards is completely easy, and any fears whatsoever of what will happen might just be bigotry? Pfft. Who wants to read about that???

To make this article worth your time, let me put in a picture of Dog Viciously Attacking The Weak Akidah Of Children & Youngsters. Tiny doggy, the destroyer of faith.

It’s okay. Dogs are cool. Nothing happened. 10/10 would touch again.