We as Malaysians like to consider ourselves as some sort of food connoisseurs, what with the variety of food from different cultures, such as the aromatic bak kut teh, the messy Yee Sang, and the ever contentious nasi lemak. And just like nasi lemak, laksa serves as a staple of Malaysian culture .

There’s a variety of laksas in Malaysia, with different sorts of recipes like asam laksa and curry laksa #editortriggered. It’s a food that’s crazy popular in Malaysia, topping a number of food lists and has barely encountered anyone who wouldn’t stop to dabao it when they pass by. Heck, even the late celebrity chef Anthony Bourdain loved it.

However, as much as we enjoy the food, ask your selves this: Do you really know how laksa, in its earliest form, even came about in the rojak country of Malaysia in the first place? Well, we’re here to tell you the story, and once upon a time… So back in the 14th to 15th century, Parameswara had founded a new kingdom in Melaka and built the Sultanate of Melaka. In that time, it was said that Melaka enjoyed a good friendship with China, prompting many visits to Melaka by a Chinese explorer Admiral Cheng Ho, who was also rumored to be an eunuch, but we’re not gonna talk about that.

And apparently, his visits prompted a trend for other Chinese traders to follow his footsteps. However, unlike Cheng Ho, these Chinese traders decided to remain and lay down roots in Melaka, bringing with them Chinese customs like Chinese noodle soup.

Nothing soothes you like the secret ingredient soup. GIF converted from Kung Fu Panda via Movieclips on Youtube

Now, while they were here, they would find themselves assimilating with the local Malaccans. And of course, while getting to know the people here, Ah Chong would meet Siti, and get married, and settle down and have kids.

Before long, there was a new society of them: Peranakans. “…excellent cooking is the cardinal touchstone of a good woman.” – Ng Chien Y. and Sharim Ab. Karim, as quoted from Journal of Ethnic Foods

Then, you know, while they were in the kitchen trying to perfect their cooking to fill up the stomachs of their families… The kitchen was like a laboratory to them, so these wives started doing experiments with traditional Chinese cuisines to spice things up, like how you’d spice things up in the bedroom when your marriage eventually goes stale.

When you’re in what’s essentially an interracial marriage, what better way to spice it up than to mix local ingredients in the Malay archipelago with your husband’s hometown food? So that’s what they did: bestowing an intermarriage between foods from different lands, essentially.

NAH, BACA:
Wow. Any Malaysian can pay JPJ RM5k to get mafia-style tinting now!? Not exactly.

Some have said that the first incarnation of laksa was a mixture of coconut milk, chili, and traditional Chinese noodle soup. Now, we can’t really speak for the Peranakan wives, but they probably didn’t think that an attempt to spice things up for the family would end up spanning generations, except that’s exactly what happened. 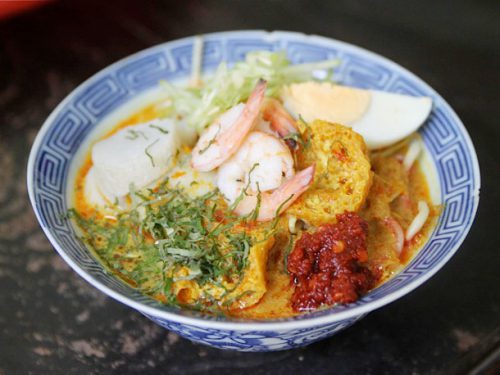 The simplest form of laksa. Image from Serious Eats

So yeah, that’s how laksa came about: love and patriarchy. But how did the name itself come about? Why call it laksa, out of all things? Well, that’s where it gets a tad complicated.

There are many derivatives to the name’s origins, really, which are:

Of course, it’s fair to say that the dish has gone through a few reinventions, which is why we have so many laksa types from different places in Malaysia, like laksa Kedah, laksa Nyonya, laksa Sarawak, and so on and so forth. For example, laksa Sarawak uses a special laksa sambal with and shrimps, while laksa Kedah uses a thick fish paste as the base of the soup.

Nevertheless, despite differing recipes, almost all the laksas share noodles like yellow noodles and rice noodles. Well, all, except for one. 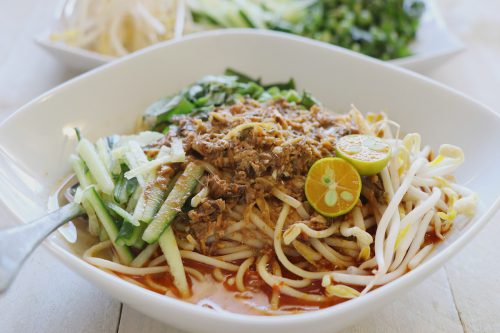 Laksa or pasta? Wrong answer only. Image from Asian Inspirations

Now, when you visit Johor and you order laksa, chances are that you’ll find yourself served with a bowl of spaghetti garnished with local ingredients. And no, neither the waitstaff nor the cook got it wrong, because that’s exactly what a laksa Johor is – a Westernized local cuisine. And now you’re probably thinking: Aduh, the angmohs can’t even leave our food alone.

Okay, it’s not actually white people’s fault though. See, while laksa was invented in Melaka, the dish managed to spread across borders over the years, including Johor. For quite some time, the people in Johor ate laksa the usual way, until Sultan Abu Bakar came along. While Sultan Abu Bakar was on one of his trips to Europe, he apparently missed laksa so much that he got his chef to make the dish for him there. But given that there was only spaghetti in Europe, the chef then went ahead to make laksa with spaghetti.

From there, the Sultan kinda fell in love with spaghetti, like Ah Chong did with Siti. When he went home, he instructed the kitchen staff to replace the usual laksa noodles with spaghetti – and that’s how the unique laksa Johor came about.

“We have used spaghetti in laksa Johor for as long as I remember, from when I was a child in the 1950s.” – Pride Foundation advisor Nasirah Aris, as quoted from The Star

And there you have it, the story of how laksa came about in Malaysia and went through so many changes throughout the years that there are now many variations of it sold across the country. Honestly, you can say many things about women, but you can’t say they’re not creative when they’re bored.

But of course, laksa isn’t the only thing that the Peranakan community has contributed to our society. Despite the Peranakan people being a marginalized community, we can see traces of Peranakan features in things like fashion, food, and languages, such as the Kebaya Nyonya and Baba Malay. Perhaps it’s time that we not dismiss them so quickly as just another tribe and start appreciating them for their uniqueness within the Malaysian fabric.