When talking about the republican form of government, the United States is generally acknowledged as the model for most of the world’s modern republics. However, even before the United States even became a republic, there was a Chinese mining kongsi (gang) in Borneo who did it first. In fact, this kongsi was so powerful, it took over the west coast of Borneo and established the first republic in Southeast Asia.

But how did a rag-tag mining gang go on to create such a progressive form of government before its time?

Born in Guangdong in the year 1738, Luo Fangbo was a Jiaying Hakka who is regarded as one of the legendary Chinese pioneers of the 18th century.  He was said to have been a very educated man who was proficient in martial arts and, according to legend, even had the power to command and ride on the backs of crocodiles to cross rivers! An aspiring Confucian scholar, Luo had dreams to build a career for himself in the Chinese civil service. However, he failed the Imperial Examinations multiple times, and a dejected Luo was forced to seek fortune elsewhere.

Soon, word reached his ears of Nanyang (the Chinese name for Southeast Asia), a land rich in natural resources (especially gold and tin) and business opportunities. In pursuit of glory, he managed to borrow money, convince some followers to tag along, and traveled to Borneo, which was then a hotspot for Chinese labourers.

He arrived in Borneo during a time of political rivalry A photo of Chinese residents in Borneo way back when. Image from: Tea With Tina/Bonding With Gaya Street 2012.

Luo and friends decided to settle in Kuntian (today known as Pontianak, Indonesia), and thus allied himself to the Kuntian Sultan. There, he founded his own kongsi named Lanfang, with the purpose of business cooperation as well as mutual protection from hostile forces – aka other kongsis in the area. Under Luo’s leadership, Lanfang prospered.

Eventually things got violent between the Kuntian Sultan and the Mempawah Sultan (after the latter decided to lansi by building a palace in Kuntian territory). The Kuntian Sultan convinced the Lanfang Kongsi, now a populous and wealthy almost-nation on its own, to fight on his side, and together they beat the Mempawah Sultan into submission. This resounding victory forced a peace treaty between all three warring Sultanates, and revealed the Lanfang Kongsi as a force to be reckoned with. They could’ve stopped more wars than the UN

Seeing the immense strength of the Lanfang Kongsi, the Kuntian Sultan gave them more land and mining concessions in exchange for protection. These terms gave Lanfang so much power that they were now effectively a city-state on their own, and the dominant power in the region.

NAH, BACA:
Namewee gets arrested for making fun of TNB but not Negaraku? Why??

Luo’s education turned him away from calling himself king Flag of Lanfang. Image from: Wikipedia

Having taken control of west Borneo, the Lanfang Kongsi held discussions as to what to do next. Unanimously, its members all urged Luo to establish Lanfang as a monarchy, with Luo as its Sultan.  However, thanks to his education and connections to the West, Luo favoured the democratic republic system (trending in Europe at the time).

And so in 1777, the Lanfang Republic was born, with Luo as its democratically-elected first President. Map of the Lanfang Republic. Image from: liucheng1972

And Luo had a vivid idea of a democratic republic: he stayed true to the Athenian democratic principles by allowing constituencies to vote for their own councils and governments. He also established the three branches of government: legislative, executive, and judiciary; a concept still in use in many of today’s modern democracies, including Malaysia. To give you an idea of just how far-sighted Luo’s political vision was, the Lanfang Republic predated even those of the United States (1789), France (1792), China (1912), and the Soviet Union (1922). In fact, so respected was Luo and the Lanfang Republic that Western international affairs experts began making visits to the region to learn more about Luo’s effective democratic governance, comparing it to Washington’s newborn United States.

Luo died in 1795 at the age of 57, after serving as president for 18 years. However, the republic would go on to live a total of 107 years and have 10 democratically-elected presidents.

But it’s safe to say that many have not heard of the Lanfang Republic, because sadly they all but faded from history when the Dutch came along.

After the Lanfang republic fell, its residents would move to Malaya and Singapore

In 1884, the Dutch colonists, trying to colonise what is modern-day Indonesia, invaded Lanfang and, after four years of fierce fighting, drove out the Lanfang Republic with superior firepower. 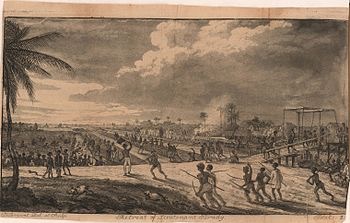 “In Jakarta and elsewhere, many people believe that the inhabitants of Kalimantan are too simple, lacking knowledge and intellectualism. But let’s face what really happened here: the great and progressive Lanfang Republic was destroyed by the Dutch colonialists.” – Prof. Mira Sophia Lubis, as quoted by Info Clearing House

The once-mighty Lanfang Republic was no more, and its citizens fled to neighbouring Sumatra, Malaya, and Singapore. However, despite being wiped off the map, the influence of the Lanfang Republic could still be felt; it is said that the Dutch refrained from declaring victory over them for fear of Chinese retaliation.

Interestingly, it is claimed that Singapore’s founding father Lee Kuan Yew (himself of Hakka descent) was descended from the Lanfang refugees who ended up in Singapore, giving birth to the idea of Singapore as the ‘Second Lanfang Republic’. But true or not we cannot prove la, so take that with a pinch of MSG perhaps.

“After the Dutch invasion, the descendants fled across the region to Sumatra, Kuala Lumpur and Singapore. Many scholars believe that one of the descendants later became the founding father of Singapore.” – Lan Fang Chronicles, as quoted by Info Clearing House Following its fall, the history of Lanfang faded into obscurity; the story was only kept alive thanks to the only written account of the republic by Yap Siong-yoen, the son-in-law of the last kongsi leader. However, in 2012, a Singaporean artist named Choy Ka Fai stumbled upon the story of Lanfang and endeavoured to revive it through his mini-documentary ‘Lan Fang Chronicles 2012′. Lanfang also features in the video games Europa Universalis 4 and Sid Meier’s Civilization V (although it exists there only as a custom mod). It’s quite remarkable how a failed scholar-turned-miner managed to establish such a progressive republic so close to home, and perhaps even more remarkable how it then pretty much disappeared from history. Hopefully efforts can be taken to ensure that this piece of history is not lost.