If there’s anything to be said about the Malaysian political scene it’s probably fair to say that it’s like a badly made TV3 drama. Heck, you can maybe already make two or three seasons out of what has happened this year. And in the latest episode, ‘PM-in-waiting‘ Anwar Ibrahim has reemerged with a claim that he has strong majority to form a new government, only seven months after Muhyiddin Yassin took the seat of PM. In case you didn’t know, Anwar also said he had a majority in parliament in 2008. Image from Korek Korek Facebook

But out of a surprising turn, UMNO president Ahmad Zahid Hamidi also came forward and stated that a huge chunk of UMNO MPs apparently support Anwar too, vaguely implying that he’s one of them.

“I was told that a big chunk of Umno and BN MPs have voiced their support. I respect the decision made by these MPs.” – Zahid, as quoted from NST

Eh, what the heck? Aren’t they supposedly lifelong enemies? Well, there’s actually somewhat of a history there. Let us start with that time when…

Zahid was staunchly against Mahathir in the 1990s 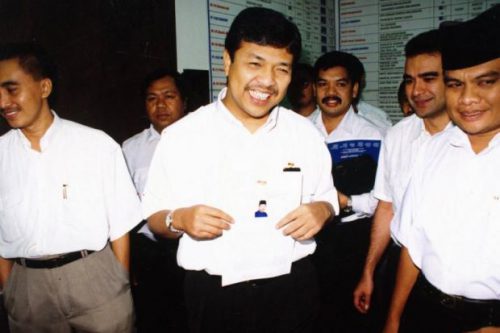 Before he was a politician, Zahid was a banker at OCBC Bank in the 1970s after having graduated from the University of Malaya. We can’t be sure as to when exactly the man decided to join politics, but it seemed it was right after he finished his studies, as his profile on UMNO stated that he became an UMNO Youth exco in 1976.

After that, he quickly rose up the ranks of UMNO, soon becoming former PM Najib Razak’s political secretary in 1986, when Najib was the Youth and Sports Minister. And from 1996 to 1998, Zahid was even elected as UMNO’s Youth Chief. Some have even claimed that Zahid’s successful career can be attributed to Anwar. And as we all know, during that time, Mahathir Mohamad served as PM for the first time and Anwar was the Deputy PM. We also know that Mahathir and Anwar didn’t exactly get along despite having governed together, mainly because they had different ideas on how to solve the Asian Financial Crisis. Anwar went on to accuse Mahathir of committing corruption to hold on to his power.

And apparently, while Mahathir and Anwar were clashing, Zahid was said to have been on Anwar’s side of the argument.

“He was the UMNO Youth Chief who was known to be a strong supporter of Anwar Ibrahim.” – Author Sayuti Omar, as translated from Cerita Seorang Zahid Hamidi dan Saya

In fact, Zahid was so vocal in his opposition against Mahathir that…

He was allegedly even part of the Reformasi movement Just to refresh your memory a bit, Mahathir and Anwar’s spat ended with the former firing the latter. Subsequently, Anwar started a movement called Reformasi, basically protesting against Mahathir’s premiership. In that time, even though he was still part of UMNO, Zahid allegedly stayed by Anwar’s side through it all.

During an UMNO General Assembly in 1998, Zahid even had the gall to speak out against Mahathir, calling for an end to ‘cronyism and nepotism’ in the Malaysian government.

“Our willingness to address these flaws will only boost the people’s confidence in the government and UMNO.” – Zahid in 1998, as quoted from Perdana Leadership Foundation Library

And that apparently didn’t sit well with the authorities, because Zahid was soon arrested under the Internal Security Act (ISA), alongside other political figures like Azmin Ali, Hishamuddin Rais, and Chua Tian Chang. Let’s play a game of spotting the Zahid. Image from Malaysiakini

Oddly enough though, Zahid was never known as part of the Reformasi 10 despite his arrest. But that was probably because Zahid had never really left UMNO, despite his rocky history with Mahathir. Upon his release, he resigned as UMNO Youth Chief. But bear in mind, his resignation as UMNO Youth Chief didn’t mean he quit UMNO entirely. As we all know, he stayed loyal to the party.

“Although I was thrown into the ISA. I have never left Umno. I have never set up a new party to attack Umno from outside.” – Zahid, as quoted from Malaysiakini

But even then, that was not the end of Zahid’s saga with Anwar. See, in response to the many accusations of corruption against him, Mahathir went on and turned the gun on Anwar, claiming that Anwar practiced cronyism, and…

Zahid was named as one of Anwar’s cronies 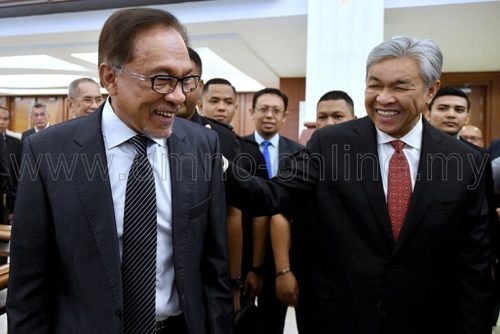 So in 1999, Mahathir released a statement, claiming that there’s proof that Anwar himself practiced cronyism as well. He alleged that Anwar had awarded his family members with important positions in various companies and owned millions of shares.

“In principle, we don’t practice cronyism but the (former) deputy prime
minister had practiced cronyism. We can prove it.” – Mahathir in 1999, as quoted from Perdana Leadership Foundation Library

In the same statement, he pointed out a specific crony who was apparently shaped by Anwar to topple him, and had personal assets of up to RM230million. But at the time, Mahathir didn’t expose who that crony was, and who else was involved in Anwar’s alleged scheme of cronyism. It was only until a recent interview with Malaysia Gazette this year when the former PM surprisingly revealed that it was Zahid all along.

“When [Anwar] supported Zahid Hamidi as Youth Chief, Zahid thought as the Youth Chief, he needed to declare his assets. I was shocked that Zahid had RM240million. I did not investigate because I did not have enough evidence back then, but [Anwar] always had cronies that he could mobilize and kept his hands clean.” – Mahathir, as quoted from Malaysia Gazette

Since then, nothing has been said about Anwar and Zahid’s friendship from way back when. But whether or not Mahathir’s claims are true, we can’t be sure. For now, you already know that Anwar has had a few stints in prison since then and was even part of the new government for a time.

Meanwhile, Zahid steadfastly stayed with UMNO through Mahathir’s departure and Najib’s rise to the top. He even got to hold a few ministerial portfolios in his time, including Minister in the Prime Minister’s Department, Defense Minister, Home Affairs Minister, and Deputy Prime Minister. But recently, it seems things might be turning around again, and…

Zahid may once again support Anwar’s bid to become PM 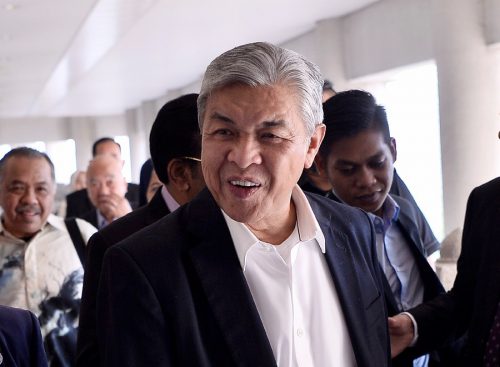 As we’ve mentioned earlier, when Anwar announced that he has majority to form a new government, Zahid came forward and announced that a majority of UMNO MPs may be supportive of Anwar as well.

To be fair, he never mentioned that he himself is one of them, but he also didn’t deny it. In fact, recently, communications director of Parti Amanah Negara (AMANAH) Khalid Samad even alleged that Zahid had pledged the support of at least 30 UMNO MPs for Anwar Ibrahim, but Zahid didn’t confirm that statement.

“Anwar was also presented a letter by Zahid, which stated that 30 MPs from Umno, if I’m not mistaken, supported Anwar.” – Khalid, as quoted from Malaysiakini

Now, everything is still hanging in the air, and they’re all still speculations and allegations until Zahid himself actually confirms his renewed support for Anwar. For that, we can only wait until his meeting with Yang di-Pertuan Agong Al-Sultan Abdullah Ri’ayatuddin Al-Mustafa Billah Shah, which has been postponed for obvious reasons. Or maybe, if luck will have it, Zahid will announce his allegiance to the public soon and end the suspense.