(This article was originally from our friends at Soscili. To read it in BM, click here!)

If you’ve been to the big cities on the west coast of the peninsula, you may have heard of turf clubs before. These are basically horse racing tracks, and the most historic ones are the Perak Turf Club, Penang Turf Club, and Selangor Turf Club.

It can be traced back to the 1800s when British traders brought their horses to the old Klang road, and horse racing has since become part of Malaysian culture despite its foreign origins. Even as horse racing became less popular around the world during and after World War II, Malaysia’s horse racing industry actually expanded. 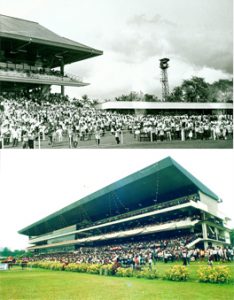 However, the high cost of the horses and their maintenance probably became a barrier to people from the lower classes of society to bet and participate. You see, real racehorses are expensive to maintain, and jockeys had to be hired to ride the horses, which is probably why it was a bougie, private activity for the aristocracy for much of its history.

In the 1960s, horse racing here was opened up to the public and events were promoted on the TV and radio, hyping everyone – rich and poor – up for their favourite horses. However, while you, as a rich person, could bet on which of your rich friends on their high horses would win the next race,  how did the normal people participate in this part of Malaysian culture when they probably couldn’t afford even the suit and tie to enter a Turf Club?

Well, for a time between the 60s and 80s, if you wanted to bet on your very own racehorse you could with this innovative idea! Just not the horses you’d expect.

Malaysians would be betting on ‘Kuda Longkang’ instead

Just in case you got a D in your UPSR BM exams, ‘Kuda’ means Horse and ‘Longkang’ means Drain – yes, ‘Kuda Longkang’ quite literally translates to Horse Drain. You might be bamboozled hearing this for the first time, but don’t worry – no animals were harmed in this activity. Lemme explain first.

Why are these dudes shuffling down a drain? GIF from the film ‘Sikit Punya Gila’

A Kuda Longkang is basically a boat-shaped, oblong piece of plastic. As you could probably guess, they would race these ‘horses’ in longkangs, since they were plastic and could float.

This is a Kuda Longkang. GIF from the film ‘Sikit Punya Gila’

However, you couldn’t just take any piece of plastic and throw it into the drain (that’s littering). If you wanted to participate in the race, you actually have to rent a ‘horse’ from the competition organiser first. After that, you would still have to pay a competition fee to compete, and to place bets on the race.

Mr Man has so many braincells he turned throwing plastic into a drain to money. GIF from the film ‘Sikit Punya Gila’

If you aren’t competing, you could place bets between your friends on which ‘horse’ would win, or just observe for the hype of watching plastic float down a drain.

The best part for the Kuda Longkang competition organisers is that the government apparently never did regulate it – there’s no such thing as an operating license for running a Kuda Longkang racket. This also meant that it had the same legal status as cockfighting (not the type you’re thinking about lah aiyo), i.e. it’s basically littering with extra steps.

But whenever money is involved, stakeholders would want rules to make sure everything was run fairly, which lets us look at the rules of the race.

First off, you miiiight wanna find yourself a clean longkang

You may have heard that some privileged cities are chosen to host the Olympics based on certain criteria. In Kuda Longkang racing, only the best and brightest drains in Malaysia will be endowed with the privilege to host races. The criteria for a drain to be elevated to racetrack status include:

The drain must be free of rubbish, algae or moss that might interfere with the race, since it’s not an obstacle course. The competition organiser is actually responsible for choosing a location, so they either clean the drain or find a clean one to host the race, so I guess your Kuda Longkang rental and competition fees actually pay for a service.

The drain water has to be clean because no one wants to be stuck next to smelley drain water, especially the referees that have to dip their fingers into the drain to collect the Kuda Longkangs at the end of the race. Besides that, if the water is too murky, you might miss who actually won the race, so that also needs to be considered. If the water flows too slowly, it’s not much of a race now is it? A slow race is a boring race, and a boring race doesn’t attract attendees or competitors. When observers don’t place bets, the stakes are low and the organiser loses out.

If the water is too turbulent or too fast, then it might be difficult for the referees to figure out who actually won. Besides that, if the race is over too quickly you’ll miss out on the excitement of your little plastic thingies overtaking each other.

The ideal length for a Kuda Longkang racetrack (race-drain?) is a straight stretch about 70 feet long. The sides of the drain probably need to be accessible too, so that observers can shuffle down the length of the drain. The drain shouldn’t be too wide, coz the referees need to collect the Kuda Longkangs at the end of the race and squat over the drain to judge the race.

Let’s say you’ve found the ideal drain, which this researcher-blogger’s mom says used to be the drain near the Kampung Baru Pasar Malam. How do you conduct a race fairly?

Basically, Referee A will place the Kuda Longkangs in a line on a starting board. This is to make sure they start at the same time. As soon as the starting whistle is blown, this board would be lowered into the water, and the Kuda Longkangs would float away with the current. Referee A’s job after this is basically to make sure that there’s no interference or cheating from the observers or racers at the side of the drain. 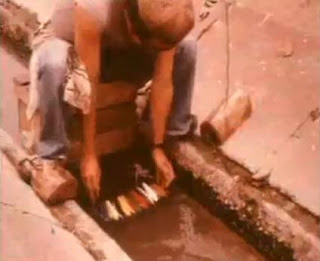 The starting board looks like this. Image from Hilang Ditelan Zaman

Referee B stands near the finish line and will call the top 3 winners of the race. Their say is final and can arbitrate on any disputes with the results. The remaining racers are considered losers. This dude also picks the Kuda Longkangs out of the drain.

Referee B’s job is basically to touch the drain water. GIF from

You might think that this was a niche activity for weirdos who like playing in drains, but take one look at the content we watch today and you’ll see why it wasn’t that unreasonable that people would substitute real sports to race tiny floating things.

Just like how the West gave us horse racing, we gave them putting things in drains. GIF from Jelle’s Marble Runs.

For example, John Oliver’s late-night show Last Week Tonight is sponsoring Jelle’s Marble Runs in light of the Covid-19 pandemic to encourage people not to seek out real-life sports, and a lot of people actually watch this stuff. (Be careful not to get sucked down the rabbit hole of marble races).

Anyways, kuda longkang races were such an institution of Malaysian society that it was a major plot point of an award-winning Malay language comedy, where…

If you’re wondering who the heck is filming all those grainy GIFs of Kuda Longkang races, it’s thanks to a certain Raja Ismail and his crew, filming the movie Sikit Punya Gila. In fact, Kuda Longkang became a major plot point for the movie, which went on to win the ‘Best Comedy Film’ award in the 3rd Malaysia Film Festival in 1982.

By the way, if you want to watch a Kuda Longkang race, you can take a look at this scene from Sikit Punya Gila. 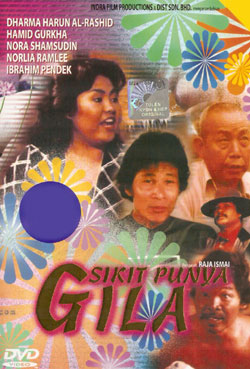 The poster for ‘Sikit Punya Gila’. You can see the uncle who organised the kuda longkang race in the top right. Image from Renjes Malaya.

Basically, the main characters Dharma and Hamid (whose actor won the Best Comedian award in the festival) moved from the kampung to the city to earn a living. However, they ended gambling away all their money on Kuda Longkang races on the weekends.

“If you want to multiply your money, next weekend follow me. We’ll go ‘nyiiiiik’ horses” – As translated from Hamid’s character in the film Sikit Punya Gila. Old timey 1966-ish KL. The ideal place to play in a drain. Image from Pinterest.

Or maybe, it was because people didn’t want to put their hands in dirty drain water, because we haven’t been paying attention to the cleanliness of our drains.

“Nowadays, no one wants to participate in Kuda Longkang races. One of the reasons is the conditions of drains today. They’re not as clean as before” – as translated from Hilang Ditelan Zaman

However, Kuda Longkang racing didn’t go extinct. Rather, it just evolved into a PG13 kids activity. According to this Malaysian blogger, a way to pass time in the kampung is to dip potato leaves in Minyak Angin Cap Kapak (or feng you for Chinese speaking readers) so that the leaves will move forwards when placed in water. 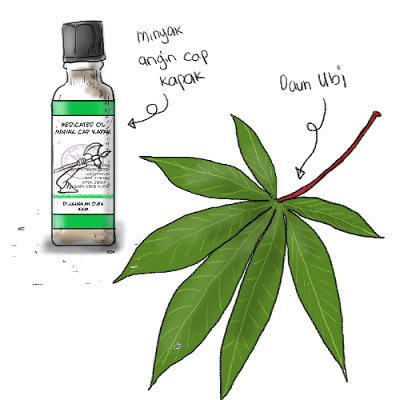 It’s that bottle that all grandmas have in their house somewhere. Image from Lanun.

Alternatively, if you’re lazy you could just throw some leaves into a drain with running water, like these people. But honestly, unless kids can bet V-bucks from this to buy Fortnite skins, we might lose this activity to the passage of time.