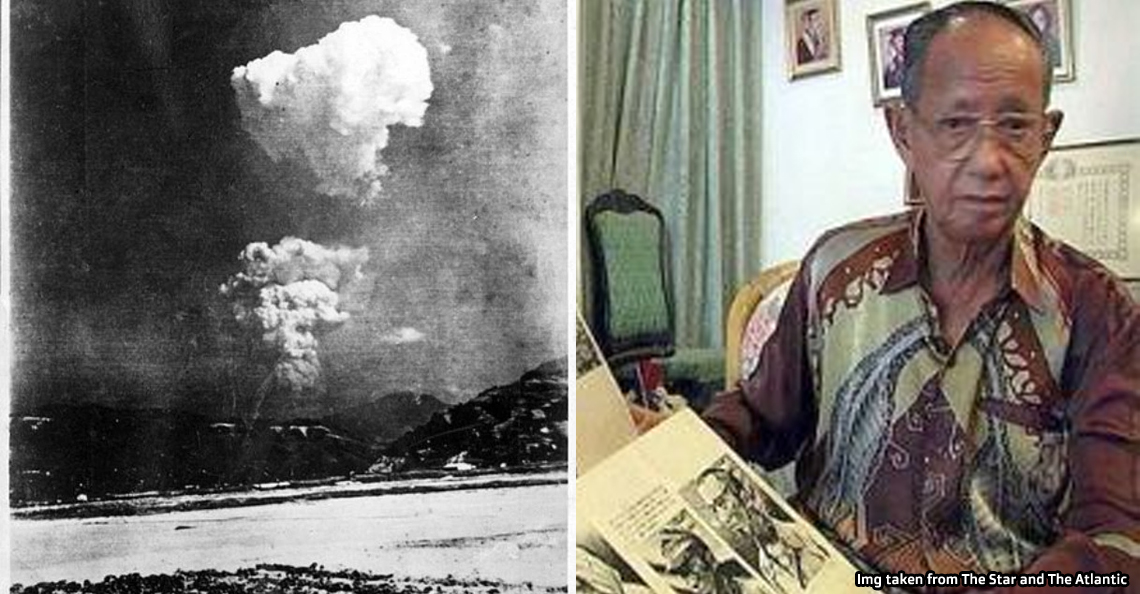 On the 2nd September 1945, Malaya saw the first Japanese garisson in Penang surrender to the British. This made Penang the first state in Malaya to be liberated from Japanese forces, and in the following weeks, the rest of Malaya saw the Japanese surrender as well.

This marked the end of Japanese rule in Malaya, and it followed the dropping of two atomic bombs in Hiroshima and Nagasaki in August: on the 6th, Little Boy was dropped in Hiroshima, and three days later, the Fat Man was dropped in Nagasaki. These weapons were dropped by US Forces under the command of President Harry S. Truman, and while it brought a swift conclusion to World War II, the damage had been catastrophic. Aerial view of Hiroshima, after the bombing. Img from LA Times.

To give you an idea of how bad things were, on the 1st of January, 1946, Japan’s Emperor Hirohito declared himself to no longer be a deity, contrary to the traditional belief in Japan. The bombs killed an estimated 66,000 people in Hiroshima and another 39,000 in Nagasaki, making them among the deadliest weapons seen in warfare so far. And perhaps surprisingly, three Malayans had the misfortune of directly experiencing it back then.

As for why they’re there…

They were students at the Hiroshima University when the bomb hit

Most of what we know of their experience came from the only survivor, the late Datuk Abdul Razak Hamid, who were among those invited to study at the Hiroshima University in 1943. It was there that he met two other Malayans: Nik Yusof Nik Ali from Kelantan, and Syed Omar al-Sagoff from Johore. Their story included another Malay student from Brunei: Pengiran Yusuf, who was later known by the name Yura Halim. It was wartime, and while Hiroshima then rarely saw visits from the enemy aircraft, when the sirens sounded one day, Razak, Pengiran, and one of their professors wasted no time and ran to a nearby air-raid shelter. However, the enemy planes seemingly didn’t come, and anxious to get on with their schedules, the three returned to their classroom.

And that’s when it happened. A blinding flash of light filled the entire classroom, followed by a thunderous noise, knocking them out. When Razak came to, they were all buried in the debris of what used to be their music building. Despite all of them being in shock, the professor urged them to go check on their fellow students at the dormitories. What greeted them was a hopeless scene.

“Everything was flattened. It was as if a thousand hurricanes had just swept across the nation. I wondered then if that was the end of the world… Hiroshima was hell-on-earth,” – Abdul Razak, as quoted by New Straits Times. Hiroshima soon after the bombing. Img from AtomicHeritage.org.

All of the landmarks were flattened in the blast, so the duo had to navigate fields of corpses and survivors crying out in pain from under the rubble before they can find the dormitory. And that’s not the worst of it…

They had to choose between killing people with water, or letting them die of thirst

When they reached the dormitory, they managed to find Miss Sumida, who worked at a nearby company. Miss Sumida wore glasses, and these had smashed into her eyes, making them a bloody mess. She was still able to walk, though, so together they rallied those who were not hurt too badly to help other survivors. However, a huge fire suddenly erupted ‘out of nowhere’, engulfing the houses on the other side of the river, rapidly making its way towards them.

The survivors tried to escape, but there weren’t much places left to hide. Many were trapped on one side of a fast-flowing river, and they eventually died by burning.

“I can never forget all the bodies lining the bank of the river. I can still see the charred bodies, falling one by one into the river,” – Abdul Razak, as quoted by New Straits Times. A nuclear blast may sometimes leave ‘shadows’ like these instead. Img from Open Culture.

Razak and co would have suffered the same fate, but by chance they found a raft floating by the riverside. They climbed onto it, but they were still within the fire’s reach, so to survive they jumped into the water, keeping themselves immersed and only coming up for air when they ran out of breath. The fire finally subsided in the late afternoon, and they managed to set up a temporary camp on a bridge.

Night brought a different kind of horror. They could hear people who somehow survived calling out for water, so the group scooped up water from the river and gave it to them. However, right after drinking, these people died. At first, Razak’s group thought that the water was contanimated or something, so they tried boiling the water first. However, it made no difference. The survivors who called out for water still died after a few sips.

Razak and his friends refused to give out water after that, despite the victims pleading that it’s better to die quenched than to die of thirst.

“But the choice was really limited. They either drink and die or face death due to extreme thirst. It was horrible.” – Abdul Razak, as quoted by Malaysia’s National Poison Center.

It wasn’t until 10 at night that people began coming for them; first, the Red Cross came to aid them, then the parents of the students who studied there. But it would take a few more days until the group decided to head for Tokyo to seek treatment, though. 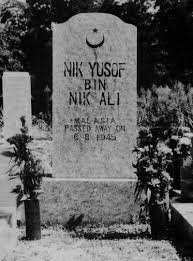 Razak and Nik Yusof‘s paths actually crossed on the way to the dorm, where Razak heard Nik Yusof calling out to them, telling them that he’s okay and for them to go check up on other people. That was the last time they saw each other. After Razak left, Nik Yusof was said to have crawled out of the rubble and tried to make his way to Itsukaichi in Tokyo. However, he was caught in the fire that followed and suffered heavy burns. He succumbed to those before he could get to Itsukaichi.

His body was among the thousands collected and taken to a crematorium at a nearby temple. He was identified, however, by the name found on his clothing.

“The body was cremated, but Nik Yusof’s skeletal remains were gathered and bathed according to Islamic burial rites by Muslim locals. The remains were later buried.” – Excerpt from Malaysia’s National Poison Center.

Nik Yusof’s grave can still be found at the Kozenji Temple in Hiroshima, about 10 kilometers away from Hiroshima’s Atomic Bomb Dome. His grave had been the only Muslim one in the middle of a Shinto cemetery at the temple. Syed Omar, on the other hand, also survived the initial blast and tried to make his way to Tokyo with Razak’s group. However, the radiation got to him, and he stayed behind in a hospital in Kyoto to be treated. For five days, his flesh cracked and fell apart, and despite the doctors trying to save him by giving him their own blood, he soon passed away. He was later buried at the cemetery of the Enkoji Temple in Kyoto, and on his tombstone, a poem by Saneatsu Mushanokoji read:

“Mr. Omar, you came all the way to Japan’s Hiroshima from Malaya to study, but what welcomed you was an atomic bomb.” – Excerpt from the Asahi Shimbun.

As for the other two…

Razak and Pengiran Yusof survived to return to their home countries 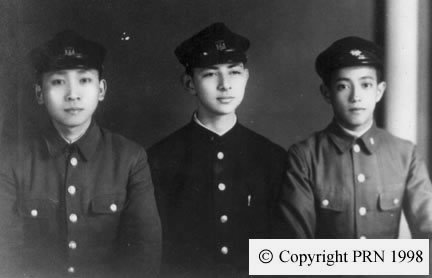 Pengiran Yusof apparently survived, seeing that he eventually wrote the lyrics to Brunei’s national anthem (“Allah Peliharakan Sultan“), and later became Brunei’s first Chief Minister in 1967. He passed away on the 11th April 2016.

Abdul Razak, on the other hand, survived the bombing with little effect, only having to go for a whole month of injections in Tokyo to keep his white blood cell levels stable. He returned to Malaya in 1946, and embarked on a teaching career at the Maktab Perguruan Sultan Idris and the Maktab Perguruan Bahasa in Lembah Pantai from 1955 to 1965.

He had also spent years teaching the Malay language to the staff of the Japanese Embassy in Malaysia, and perhaps because of that, he was entrusted with the task of leading Malaysia’s Look East Policy by the then Prime Minister Dr Mahathir. For his work, Razak received the Japan Foundation Special Prize in 1995, at an event attended by the Emperor and Empress of Japan.

Razak eventually passed away on the 18th July 2013 at the age of 88. While the atomic bomb miraculously have little effect on his physique, after experiencing the effects of it first hand, perhaps it was no surprise that he spent the latter part of his life advocating against it.

“I don’t have nightmares but I hate it when someone mentions war. I hate it as I have seen the effects of war… I remember vividly one of my friends from China with the skin on his back coming off and crying in pain. It was so sad.” – Abdul Razak, as quoted by The Star.