Thanks to the MCO, we’ve seen more and more of our police force out in the field, especially at roadblocks.

But because of the touch-n-go nature of roadblocks – or ‘no-touch’, cos #AmalPenjarakanSosial – it’s rare that we get to have much interaction with them besides getting waved to pass, or having to make up an excuse as to why a letter is missing from our number plate (yes, this actually happened to the writer once). “Must’ve come off in the rain.” Image from: Autobuzz

And in the process, we seldom pay attention to that little thing on their uniform which can actually tell us a whole story about the officer wearing them: their ranks. Ever wondered what those stripes/stars mean, and what the specific roles are for each rank?

To answer that, we decided to do a little digging, and we found that the life of a police officer is actually a lot harder than you’d imagine.

Note: the specific roles differ from situation to situation and unit to unit (i.e. a regular Corporal will not be doing the job of a Special Forces Corporal), but these are just the general tasks expected of each rank as provided by the Public Service Department of Malaysia.

Starting salary (for entry-level constable): RM1,220 – 4,152 (not including allowances, depends on entry grade)

Your garden variety police officer, these guys/girls are the most common ones you’ll see patrolling the field, usually in twos on foot, car, bike, boat, or horseback (yes, horseback). Their job scope is listed as ‘general policing and crime prevention’, and are usually the public’s first contact with the police. As mentioned, they are the ones usually dispatched to patrol the streets and borders (as well as for search-and-rescue), but they are also charged with arresting and/or escorting criminals (especially to and from court trials). And of course, to pew-pew the bad guys, but only if absolutely necessary.

In the bigger picture, these three ranks are generally tasked with assisting the higher-ups in intel gathering and investigations, but between the three, there isn’t too much distinction in their designated tasks (although, the lance corporals and corporals, who are the first of the ‘lower officers (pegawai rendah)’ have the added burden of supervising their juniors).

Fun fact: there is a separate band for Orang Asli applications (Grade YP1) for direct entry as a PDRM constable, and their starting pay is slightly higher compared to non-Asli ones of similar qualification (Grade YT1).

We usually have the image of a sergeant as being a grizzled, humorless veteran who’s seen it all, and while this is often the case, not all sergeants are middle-aged men/women; in fact, if you hold a diploma and are between the ages of 18-28, you qualify for instant entry into PDRM as a sergeant. 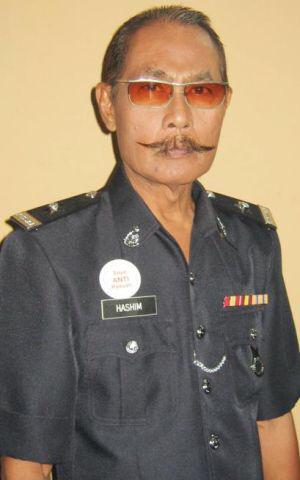 Sub-Inspector Hashim from the hit Malay police drama ‘Gerak Khas’. Who could ever forget that iconic mustache? Image from: Twitter user @furrxh

However, their jobs aren’t as exciting as one would imagine; sergeants are mostly confined to sitting in the police station for long hours doing paperwork and HR stuff. That isn’t to say that they don’t go out in the field at all, they also supervise and assist community police programs (such as Rakan Cop/Rukun Tetangga), general field operations, as well as search-and-rescue operations.

As one would expect, this is where the element of leadership really starts coming into play; as the more senior of the lower officers, these three ranks are expected to always maintain discipline, evaluate juniors, supervise training exercises, and keep up performance levels of the squad. They’re also expected to be a bit more educated on the law, and are often tasked with carrying out some level of prosecution work. Which, in other words, means more paperwork.

NAH, BACA:
This 7-year-old from Seremban was not allowed to enrol in a government school at first. Why?

Fun fact: Police dogs are assigned ranks too. A PDRM K-9 Labrador sergeant by the name of Tho went viral last year after his unfortunate passing. RIP Sgt Tho. Himb was a good boi. Image from: Rancak[TV]

Senior officers and top brass: Inspectors and above Ranks: pips, crown, stars, keris, paddy branch… basically, the more stuff you have on your shoulder, the more boss you are

Starting salary (for entry-level inspector): RM2,502 – RM9,803 per month (not including allowances)

These are the brains of the police force. Senior officers (‘pegawai kanan’) are usually more educated and intelligent than the lower ranks; you need a degree or higher to qualify for direct entry. In fact, our current IGP Tan Sri Abdul Hamid Bador has a degree in police science from UKM, and was a Chevening scholar at Birmingham University, England.

Hence, senior officers are the public and PR face of PDRM, and are the ones you see giving interviews, making public announcements, speaking on crimewatch TV shows, or holding up seized drugs in press conferences. Because of the highly public nature of their jobs, senior officers have to be the most vocal officers in the police force; just check out ASP (now DSP) Noorhamasiren Boonthnam Ekkasook giving a civilian a tongue-lashing for breaking the first MCO early last year:

And as you’d expect, the senior officers are the strategic heads of the police force, typically charged with thinking up ways to bust organized crime, allocate resources, and make other big decisions regarding criminal activity. They’re also the ones who represent Malaysia at an international level, usually by coordinating and/or assisting in overseas operations.

Whether at home or abroad, as operation leaders, they’re expected to conduct investigations on crimes, lead task forces, and conduct raids and searches. Which also means… you guessed it: paperwork.

But all of these responsibilities come with perks of their own: as a senior officer, you get to be called ‘Tuan/Puan’ within the force, get fancy new accessories on your uniform, and a new police ID prefix (‘G’ before police ID number) to go with it. Oh, and once you get to the rank of Assistant Commissioner (ACP), you get to fire lower ranks too. Must be a heck of a power card to hold.

Fun fact: Under certain circumstances (such as for terrorism or communcations-related seizable offences, and ONLY with reasonable suspicion and justifiable urgency), an officer ranked inspector or above can raid premises without a warrant. Also, raids, arrests, roadblocks, and body searches can only be performed in the presence of an inspector or higher.

It may be cool to wear a fancy uniform, but police work is no walk in the park

While the MCO roadblocks have undoubtedly become a major annoyance for those of us just trying to get to work, it’s important to remember that the men and women taking care of these roadblocks are doing jobs of their own as well. And, as you can see from their salaries above, they definitely won’t starve to death but it isn’t really that high either.

In fact, low pay has been an issue for PDRM for a while now, and a request was drafted two years ago to increase cops’ pay, which thankfully is currently under review by the government.

And getting the job in the first place is no mean feat either: Police Training Centre (Pulapol) cadets have to fulfil certain criteria (they even measure your chest width!) and undergo rigorous physical and mental training:

“We wake them up from sleep to carry out any assignments, and this exercise is done based on the needs of the police.” – as quoted from SAC Zulkifli Mohamad, commander of Pulapol Kuala Lumpur 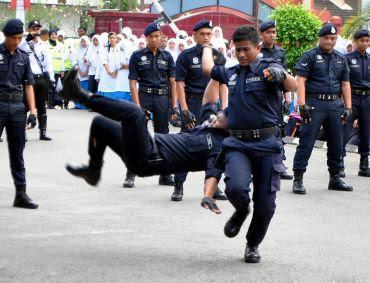 The road to becoming a police officer is not an easy one. Image from: My Adha

So while you should of course make sure that the cops don’t overstep their boundaries like in recent incidents, you could also spare a thought next time you see our boys and girls in blue toiling under the hot sun, and hopefully with this article you can surprise them by addressing them with their correct rank.