For many Malaysians, taking public transport everywhere you go is kinda like the rite of passage everyone goes through before they can afford a car. Thanks to less bank loans being issued for new cars, traffic jams getting worse and petrol prices being so mahal gila… it looks like lots of Malaysians are turning to public transport.

And with the latest LRT and MRT lines, getting to places you need to go is a teeny bit easier these days. Sigh… no traffic jams but got human jams. Unedited image from Berita Harian.

According to Free Malaysia Today, the Land Public Transport Commission (SPAD)’s independent Customer Satisfaction Index survey indicated that 90% of respondents were satisfied with the urban public transport last year (but yea those are numbers from SPAD itself… so…..).

But what about the KTM? As the oldest rail transport system in the country which dates back to the British colonial era, it’s been around for while. Like all old things, it’s starting to gather dust and deteriorate lately. In fact, MalaysiaKini reported that the annual ridership for the KTM komuter has been steadily decreasing over the years.

KTMB has lost almost RM2 billion in the last 15 years!

Maigad! How did it get so bad?? First we gotta look at their history…

The first railway line was opened by the British in 1885 from Taiping to Port Weld (now known as Kuala Sepetang) in Perak to transport tin ore. Which makes the railways in Malaysia about 133 years old, even though some of the tracks and the original train stations built by the British no longer exist. 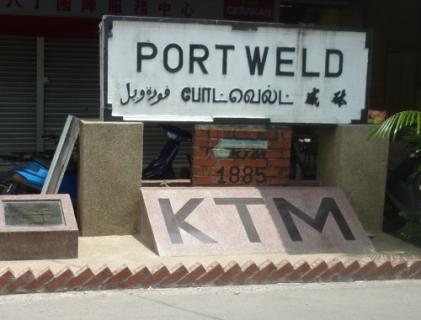 A little slice of history is still preserved to this day. Got 4 languages  on the sign some more! Img from Sin Chew Daily.

The first KTM Komuter trains (Malaysia’s first to be run on electricity) began ferrying passengers between Kuala Lumpur and Rawang in 1992. According to MAG Technical and Development Consultant director, Goh Bok Yen, KTM still has a vital role as the main mode of intercity public transport for passengers and freight cargo.

Unfortunately, a Penang Institute study highlighted the accumulated losses of RM1.87 billion since 2010. There has also been a drastic drop in passengers, recording a 73% drop in passengers between 2010 to 2015.

“Without the government’s support and backing, there is growing concern that KTM would not be able to survive” – Dr Ong Kian Ming, head of the Penang Institute in KL, via Free Malaysia Today

Then there were a few bad business decisions KTMB has made, like the RM85 million project they had invested in to install an Automatic Fare Collection system that was later abandoned which led to a lot of money going down the drain. There is some hope with KTMB’s Electric Train Services (ETS – the one that goes to Penang, Ipoh etc.), which have recorded a 10 times increase in ridership since 2010. The number of passengers riding on the ETS have been rising every year, making it one of the top train services if you wanna balik kampung. In 2016, their passenger numbers was at an all-time high.

This is probably thanks to its reputation for being a pretty safe and reliable service. Unfortunately, even the ETS trains cannot help KTMB’s financial performance over the past few years. Despite the number of ETS passengers going up, their losses continue to increase.

The fare hike, competition from LRT and MRTs and slow trains are all causing KTM’s decline

We tried to figure out why the KTM has been barely chugging along. According to Dr Ong Kian Ming, among the main reasons for the fall in daily ridership was the fare hike in 2015. The company has not changed their fare prices since 2003, while KTMB said was the price increase was necessary due to increasing operations cost.

However, in this writer’s experience as a regular train rider, the ‘low’ prices KTM is advertising isn’t necessarily true. If you compare the cost of tickets for KTM komuter and LRT lines, the LRT costs a fraction of the price of the KTM. The price of transport can be pretty important to some Malaysians on a budget. With the LRT’s overall speed and reliability, it’s pretty easy to avoid using the KTM if there’s other train services available.

A user complained on Lowyat about the KTM price hike being an extra burden for a student’s limited budget. Screenshot from lowyat.net

Another significant reason could be the decrease in train frequency due to the Klang Valley Double Track upgrading work, scheduled to last till the end of 2019. The komuter’s schedule was changed in December last year, which made the komuter’s frequency decrease drastically.

Then there’s the increased risk of train derailments and accidents, such as this cargo train derailment last year, which disrupted komuter services for 3 days or this collision between two trains in 2016 (pictured below). Tracks getting flooded which then disrupt service is also a common occurrence on the komuter during heavy rains. 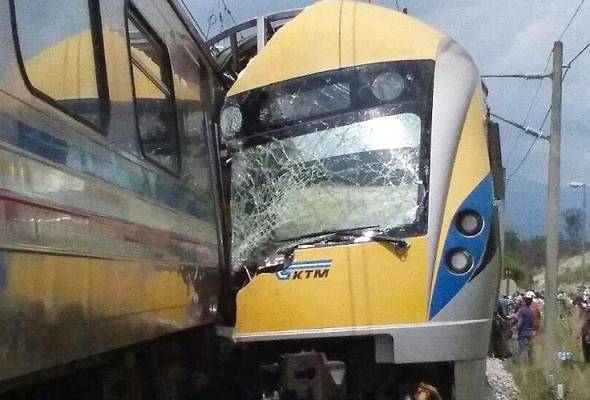 Eep… excuse us while we rush to the nearest LRT station. Img from Astro Awani.

Needless to say, the increase in competition from MRT Line 1 and LRT lines which boast faster trains is hurting the komuter’s ridership. This is going to be even worse once the extended LRT3 and MRT Sungai Buloh-Putrajaya lines start running in 2022. The KTM services are also somewhat isolated from the whole train system, with less connectivity to the other lines.

Riding the komuter can get a bit complicated, with a separate komuter card used by KTMB compared to the rapidKL cards that can be used across all the other train services (though you can probably avoid it all by using a Touch ‘n Go card). Not only that, many of the existing KTM stations are in not-so-strategic locations and are pretty difficult to access.

One of the main reasons why KTM hasn’t gone bankrupt by now is most probably because of the gomen’s continuous support, including a total of RM880 million in loans. KTMB has even asked for this loan’s repayment to be extended to 2021. KTMB hasn’t incurred larger losses mainly due to the fact that they haven’t been paying the cost of maintenance of the tracks and stations. That’s LOT of money being put into a company that hasn’t been making money lately.

Transport expert, Goh Bok Yen has said that the gomen’s failure to modernise its operations had left it looking inferior to the newer LRT and MRT trains, which are under Prasarana Malaysia Bhd. Fun fact: Both KTMB and Parasarana Malaysia are gomen-linked companies that come under the Minister of Finance Incorporated.

“The problem is that because we didn’t modernise KTM’s assets and business model, it suffers from a serious lack of quality in terms of comfort, frequency and speed compared with the LRT and MRT” – Goh Bok Yen, via Free Malaysia Today

The gomen’s most recent steps to cutting KTMB’s costs include the recent Railway Network Access Agreement (RNAA) which will see the ownership of all of KTM’s assets such as its stations, trains and tracks being transferred to the Railway Asset Corporation (RAC). This transfer will reportedly happen next year.

You’re probably like this writer, who thought ‘who the heck is this RAC fella??’ The Railway Asset Corporation, according to their website, is a government-owned agency under the Transport Ministry formed back in 1992. Imagine this many people handling over RM36bil… Img from rac.gov.my

The gomen stated that KTM’s assets (which amount to over RM36bil!) are extremely valuable, particularly to the country’s transport sector. Ong Kian Ming, meanwhile condemned the RAC as he said it was pointless to transfer KTMB’s assets as the RAC does not have the expertise to handle such assets with only 38 employees. The Railwaymen Union of Malaysia (RUM) had even launched an official protest in 2016 on the gomen’s agreement, claiming that the move by the Transport Ministry will ‘destroy KTMB’.

Ong predicted that in the future that KTMB’s assets under the RAC might lead to a rise in prices. But Pakatan Harapan said that stripping KTMB of its assets will kill the national train service.

“Pakatan Harapan agrees that KTM must be maintained and taken care of as it is a heritage institute” – Parti Pribumi Bersatu Malaysia (PPBM) president, Tan Sri Muhyiddin Yassin, via the Malay Mail Online

Another step the gomen is taking is shutting down the current Tebrau Shuttle, which takes passengers from JB Sentral to Woodlands, after the launch of the new Singapore-JB Rapid Transit System (RTS), due to be completed in 2024.

In order for KTM to survive, they gomen will need to change the entire business model Img from KTMB and CNN.

Lots of experts are calling for the gomen to change KTMB’s business model in an attempt to salvage what was once the best (or at one point, the only) rail transport in the country.

“A serious rethink of the business model of KTM is needed if it is going to survive moving forward” – Dr Ong Kian Ming, head of the Penang Institute, via Free Malaysia Today

According to Goh, it’s gonna be really really expensive to help KTM play its optimum role and adapt to a new business model. Like all other forms of public transportation, KTM will need to be heavily subsidised by the gomen before it starts making money on its own.

Many compare it to the extremely rocky, drama-filled MAS overhaul, with most experts saying KTM will only survive and avoid heading straight for bankruptcy if something drastic is changed within KTMB. But for those who are sentimental about our komuter trains, fret not as the gomen doesn’t look willing to get rid of KTM anytime soon.