Unless you grew up with Astro (omg you’re so rich), you’ll probably know what this GIF sounds like:

If you don’t know what sound that makes, fear not! Soon, that’s all you’ll be seeing (and hearing) if you tune in to any of the analog channels you grew up with on your old TV sets. Before we all get flustered by the words ‘analog’ and ‘digital’, just think of analog as national television and digital as Astro for the time being.

Anyways, Malaysia is currently upgrading its TV systems from analog to digital for some time now, and the end game is killing off analog broadcasts completely when the upgrade is complete. For now, national TV like TV1 and TV3 exist on both analog and digital platforms, but when the upgrade is complete, older TVs will be showing nothing but static unless they have something extra attached to them, like a digital decoder. As part of the Digital Terrestrial Television (DTT) Project, broadcasters (read: TV stations) will be abandoning their traditional ways and move on to a digital platform.

Why change to digital TV anyway? Analog not good enough is it? The short answer is that digital broadcasts are a lot better than analog broadcasts in terms of quality and economy. The main difference between the two is in the transmission, i.e. the process through which the little people in your TV got there. You can read in more detail about the difference between the two here, but for the purposes of this article imagine that you’re trapped in your room because terrorists are in your house for some reason. You need to ask your next-door neighbor for help, and all you have are a walkie-talkie and Morse code. 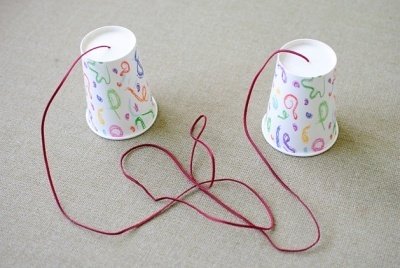 It could always get worse, you know. Just be thankful. Img from Pinterest.

Anyway, in this analogy, you’re the TV station, and your next-door neighbor is a TV. If you call for help using a walkie-talkie, your voice will have that raspy quality, and it may be punctuated with static. You know, that khhh khhh sound. While it’s easy for your neighbor to mishear what you say, he can probably get the general idea that you need help. This is analog broadcasting. It directly changes your voice into electrical signals, and sends them off on radio waves, but along the way they can get distorted by other signals bumping into it.

Using Morse code, on the other hand, is like digital broadcasting. Your words are broken down into a series of beeps and pauses, and while it’s useless if your neighbor don’t understand Morse code (like an old TV without a decoder), the message is unmistakeable. In digital broadcasting, the message is broken down into tiny bits, and each tiny bit is assigned a value (usually 0 and 1), resulting in much clearer audio and visuals. 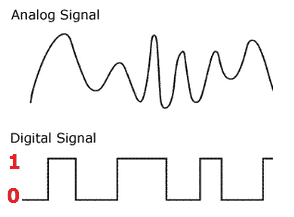 The difference in graph form. Img from HSpace.

But the advantages don’t stop there. Although both are transmitted on radio waves, analog signals can’t get very far, so if your house is far from a broadcasting antenna or is surrounded by tall buildings, good luck watching all those Cerekaramas. Digital transmissions are unaffected by distance and most obstructions, and on top of that they take up less space than an analog transmission.

See, TV programming (and radio) are transmitted at a certain frequency, and you have to tune in to that exact frequency to get the message. For example, in the Klang Valley, if you want to get Hitz.fm on your radio you have to tune in to exactly 92.9 Mhz. This is an example of an analog transmission, where a single channel/station may take up a whole frequency. Digital transmissions, on the other hand, take up less bandwidth than that, so for digital radios you can switch from 92.9 MHz to 92.95 MHz and get a different channel completely. Simply speaking, you can basically squish in three or four digital channels in the space of a single analog channel.

So yeah, between the improved, constant quality and the bandwidth saving, it totally makes sense to switch to digital transmissions. So why wait until now? Well…

The process had been going on for a while, but it kept getting delayed So why are we suddenly changing the transmission mode? The process actually started sometime in the 2000s, when the Southeast Asian countries got together and decided that by 2020, we should all have completely shifted to digital TV transmission. This is marked by a country managing to switch off analogue transmissions completely and go fully digital. However, since different countries have different circumstances, there are severe gaps in the progress made by each country, and Malaysia is no exception.

For Malaysia, we’ve announced several deadlines to switch off analogue broadcasting, and the latest one was supposed to be on the 30th of June this year. However, recently our Communications and Multimedia Minister Datuk Seri Dr Salleh Said Keruak had announced yet another postponement.

“This is to allow more time for all parties to prepare for a fully digital broadcasting environment, from the broadcasters themselves to the man in the street,” – Datuk Seri Dr Salleh Said Keruak, for the Borneo Post.

But why so many delays? Changing the transmission mode into something new for a whole region is a very complicated affair, and within Malaysia, one of the reasons for the delay was pricing. The company that’s responsible for digitizing Malaysian TV is called MYTV Broadcasting Sdn Bhd, and basically what they did was set up the digital broadcasting platform called myFreeview and made it work. For now, the TV companies looking to go fully digital are:

For broadcasting space in the new digital system, MYTV charges each company an annual transmission fee. Initially, the offered price was RM12 million per Standard Definition (SD) channel and RM25 million for High Definition (HD) channels, which the companies said are a lot higher than what the broadcasters were used to. Due to these high fees, some broadcasters like Media Prima had said that they won’t go for digitization. So both sides, along with the Malaysian Communications and Multimedia Commission (MCMC) had been negotiating on a better price since. They care, but not that much. Img from GoodReads.

With each ASEAN country scrambling to switch their systems at the same time, Malaysia also has to consider the systems of countries bordering it. According to Datuk Seri Salleh, it’s necessary to communicate and move in tandem with Brunei, Indonesia, Singapore and Thailand to avoid clashing between each country’s TV signals, especially near the borders. This may partly explain why Singapore had also postponed its analogue switch-off date to this year’s end.

“Technical requirements make it necessary for us to move in line with our neighbours as their plans will have an effect on our spectrum and channel usage along the common border areas,” – Datuk Seri Dr Salleh Said Keruak, for the Borneo Post.

The final reason may have something to do with a question you’re probably thinking right about now, which may be…

If they switch off the analog system, how can my ah gung back home watch the news? Or even shirtless Salman Khan? Img from Team Academy.

Like we mentioned earlier, older TV sets can’t understand digital transmission, unless it is hooked up to a decoder. As of June last year, digital transmissions have covered 87% of Malaysia, but the percentage that can make use of that transmission is far lower as they don’t yet have a decoder. Although now you can go to almost any electronics shop and buy a decoder for around RM200 (or a TV with a built in digital tuner), not everyone can or will shell out a few hundred bucks just for TV programs.

To the government’s credit, they had thought about the problem and pledged to give out free decoders. Together with MYTV, the government had planned on giving out 4.2 million free decoders, with most of it probably going to BR1M receivers. The bill for 2 million units will be footed by MYTV, while the rest will be on the government. However, as of June last year only 500,000 units had been given out. An ad for a MYTV decoder. Img from Lelong.com.

Part of the reason for that, according to industry experts, is because content providers want the decoders to have several advanced features first. Besides translating digital signals to analog, the decoders must also be able to record audience viewership data and have Wi-Fi modules, among other things, to ensure that the digital platform can be utilized fully. Broadcasting industry players noted that the first batch of decoders rolled out have none of these features, and MYTV had since then promised to add these features in the next batch.

And all these headaches should be worth the effort and money, as… Obviously cartoons in HD as well. Img from imgur.

The reason why we’re rushing to switch off analog TV, according to Prime Minister Datuk Seri Mohd Najib Razak, is to improve the living standards of citizens as well as to transform the country’s broadcasting industry in line with the national agenda to get developed status by 2020. Once everything’s in place, Malaysians can expect to get free national TV in crystal clear quality, more free TV channels to sprout up, and maybe more jobs in the content industry.

Yep, even more channels will be possible because of the space-saving properties of digital transmission, and perhaps it won’t be too much of an exaggeration to say that the main benefit to this whole digitizing exercise is all the extra space freed on the radio spectrum. The government had plans to use it for other things, like communication.

“The spectrum that will be freed up with digital transmission will be reallocated for telecommunication and cellular services,” – Datuk Seri Mohd Najib Razak, for The Malaysian Reserve.

This extra space will be sold to local telco companies for potentially billions of ringgit. While the billions may go to the gomen, experts had predicted that the increased efficiency gained from this space will benefit the people, too, as telco prices might go down along with the operating costs.

There’s still a lot to do and a lot to figure out before all these happens, though, so in the meantime, there’s no rush to throw out your old TVs or buy new decoders yet. Maybe we can all enjoy the static while it lasts. Oh, and by the way…