Orang Kurang Upaya (OKU). By definition under the Persons with Disabilities Act 2008, they’re…

“…those who have long term physical, mental, intellectual or sensory impairments which in interaction with various barriers may hinder their full and effective participation in society.”

The govt estimated that there are 4.86 million OKUs in Malaysia. However, while it’s only typical to think that all OKU people are registered under the Department of Social Welfare Malaysia (JKM), only 500,000 were registered and hold OKU cards in 2019.

Seeing this number, we can’t help but wonder why won’t OKU wanna get a card that can help grant them any sort of benefits? Coincidentally, we also came across this tweet questioning the same thing – only directed to parents. 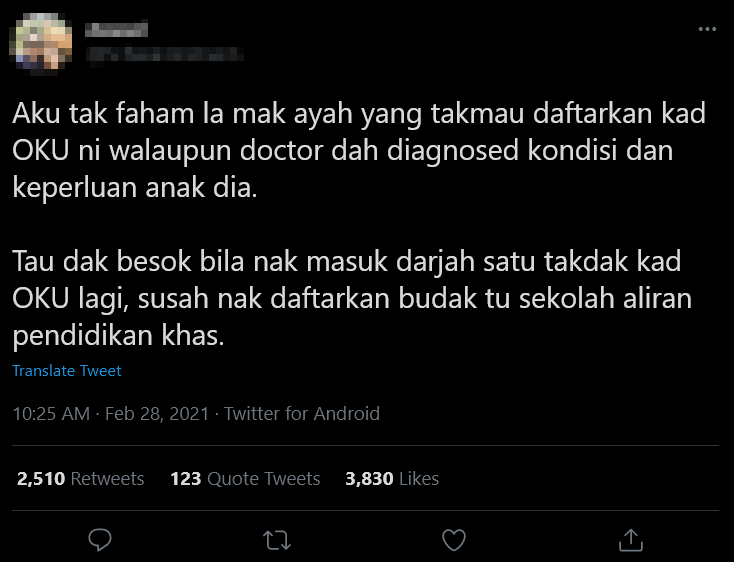 Having that in mind, we talked to five people – four parents of OKU children and an OKU person himself – to find out more about this.

Let’s be real. Nobody wants to hear the doctor telling you that you’re disabled. The same goes for parents of OKU children like Zarina.

Zarina is the mother of an autistic child named Amin. Back when Amin was three years old, Zarina noticed that he was acting a bit odd despite recognising alphabets and was very good at arranging books.

Nothing to do with TBR pile. Gif from The Awkward Book Blogger

“In 2012, the awareness on autism was still low. I noticed that Amin acted a bit strange – he liked to pull my hand instead of telling me what he wanted. So, I looked up speech disorders and found several symptoms that fit Amin’s behaviour but it wasn’t speech disorders, it was autism.” –  Zarina told CILISOS. Translated from BM.

However, Zarina couldn’t accept the fact that her son might be autistic. So, instead of bringing Amin to the hospital and get him an OKU card, she trained her son to talk and later enrolled him in a private kindergarten when he turned five.

Initially, Amin would not even leave the car when his parents dropped him off at school. But after some encouragement from Zarina and her husband, Amin was able to join the class. However, he wasn’t able to make friends with the other kids in his class and preferred to be alone.

Realising this, Zarina eventually brought Amin to the hospital to get diagnosed with autistic sometime in 2016. By then, she could finally accept the fact that her son has autism. And when Amin got the OKU card, she was able to send him to a Community-Based Rehabilitation centre (PDK), where OKU people would learn many basic life skills including socialising with other people. One skill OKU people can learn at PDK is culinary. Img from NST

But that’s not the only challenge parents face. For some people like Liyana Abdul, a mother to a 7-year-old with mild autism, dyslexia, and ADHD, it’s the objections from family.

“This situation is new to my husband’s family. They were afraid that OKU cardholders might face difficulties in getting a job in the future.” – Liyana to CILISOS. But that’s not the case. Click image from AskLegal to read more about Grab’s initiative to help Person with Disabilities Grab drivers. #notsponsored

Fortunately, Liyana managed to reason out with her husband’s family and get an OKU card for her daughter.

But it’s only typical to feel this way. In fact, Zarina pointed out that some people may even be ashamed of themselves or their children if they were to get the OKU card.

“Some people think getting an OKU card may look like you’re going to ask for or rely on handouts. That’s not the case at all.” – Zarina.

People with OKU card can choose NOT to use their benefits Although this always happens. 🙁 Img from The Rakyat Post

However, Zarina pointed out that some people think that they can afford all these benefits WITHOUT the card.

But here’s what we learnt – OKU people have the option of not fully utilising the benefits they’re entitled to. For instance, Joshua Ang, an OKU cardholder who is visually impaired, told us that he didn’t even go to a special needs school. And that’s how he met one of CILISOS interns, Ivory.

“OKU students do have the option to go to schools that are equipped with programs for OKU under the Ministry of Education. But for me, I went to normal schools like everyone else. 😊” – Joshua to us.

Despite not going to a special needs school, Joshua highlighted that he still received other assistance, especially during examinations like SPM. Joshua (left) and CILISOS intern, Ivory at their school graduation in 2018. Img from Joshua

Azizah Hamdi, a mother to 14-year-old Nasihah, who holds an OKU card, also shared that her daughter didn’t go to a special needs school.

“Nasihah doesn’t have a learning disability, which is why I enrolled her in a normal school. Although Nasihah has speech disorders, she can still understand the teacher’s instructions at school.” – Azizah to CILISOS. Translated to BM.

However, we gotta note that this won’t work for everyone. Azizah noted that each OKU person would receive different kinds of benefits according to their disabilities. You can check out the various disabilities here.

And this is true seeing how the benefits heavily depend on the criteria set under the Person With Disabilities Act 2008. Azizah added that in order to get the proper benefits…

The OKU cards should be renewed. Some can even be CANCELLED?!

Just as with your IC, we learnt that OKU cards should be renewed as and when you’re required by the JKM or based on the doctor’s advice.

“You can still use it if you’re not required to renew it. But if the hospital or JKM wants you to renew it, then you would have to do it in order to get the benefits you’re entitled to.” – Azizah. Translated from BM.

Sharifa, the mother of the physically disabled Bashira, is the only interviewee who has renewed her daughter’s OKU card. Sharifa mentioned that Bashira, who was diagnosed with Marinesco Sjogren at the age of four years old, has renewed her OKU card when she was in secondary school. This is Bashira’s second OKU card. Img from Sharifa

Aside from that, Sharifa also shared that she has made another OKU card for Bashira while they were staying in the UK.

“Both cards (Malaysian and the UK cards) are somewhat the same. They’re given out based on the type of disabilities an individual has. For Bashira, it’s a physical disability.” – Sharifa.

Sharifa said that updating the card would mean updating the information displayed on the card and this is true especially for those categorised with learning disabilities. Zarina, for instance, shared that she would be renewing Amin’s card soon for this very purpose.

“We want a specification on the card. Back then, autism is placed within the same category with dyslexia and learning disabilities.” – Zarina.

Zarina also added that in some very, verrrrryyyyyy rare cases, the OKU card doesn’t last forever! As it turns out, there are two ways in which the OKU card is void – when an OKU person dies or when the doctor said they are cured.

At the end of the day…

The OKU card is just as important as the IC

We get what some of you may think – why do you even need the OKU card if you can afford the benefits and assistance? Or if disabilities can be cured anytime soon?

One simple answer – it’s a form of identification for OKU people in Malaysia. And this is especially true when an OKU person has a disability that can’t be seen with the naked eye.

“Well, the OKU card serves as a form of identification towards disabled persons provided by the Malaysian government’s Department of Social Welfare Malaysia.” – Joshua.

“If anything happens to our child, we can’t prove anything without the card. The OKU card is especially helpful when dealing with authorities like roadblocks during the MCO.” – Zarina. Remember the case where an autistic person was arrested for molesting? Click image to read more

Besides identification, it would also mean that you’re getting the OKU person proper medical treatment. See, the process of getting an OKU card is pretty straightforward and the first step is to get a diagnosis by a doctor. But Liyana pointed out that it may consume a lot of time and cost to travel.

“It depends on your situation. My daughter was first diagnosed at a private hospital, then referred to govt hospital as advised by private. To get the diagnose, not all hospital has the special department for children development. You need to refer to the right hospital.” – Liyana.

However, she added that the documents you need to register yourself or your child for the OKU card are simple. All you need are…

Share this article:
NAH, BACA:
Wah why did these ballsy Malaysians climb a Dubai tower on Hari Raya?