Now, you may think that NGOs and anyone with a sense of decency would think that it’s a good thing. However, the exact opposite happened, where a number of NGOs and MPs made a lot of noise about it, criticizing the committee’s effectiveness.

And this is because… Other than being an MP and a one-time Minister, Shahidan Kassim was also allegedly a child molester. Just two years ago, a fifteen-year-old girl filed a police report against him, claiming that he had inappropriately touched her.

Apparently, Shahidan was a sponsor for a school busking team that the teenager was a part of. And after he had seen her perform on the team once, he invited her for a chat in his car. And it allegedly wasn’t a very innocent chat, because he proceeded to touch her hands and shoulders without permission.

“She immediately left the vehicle. As soon as she got out, she cried, as witnessed by the teacher who brought her to this MP.” – Former Perlis police chief Noor Mushar Mohd, as quoted from FMT Not just that, it was said that Shahidan had objected to the formation of the committee in the first place. As such, Shahidan’s appointment had drawn a lot of flak from the public, so much so that almost all of Malaysia’s human rights groups came together to object his appointment, including the Women’s Aid Organisation (WAO), All Women’s Action Society (AWAM), and Family Frontiers.

“In a time when women’s and children’s rights have been significantly set back by the pandemic, it is even more important that we appoint credible MPs, with relevant expertise and commitment to child rights and gender equality to the committee.” – WAO, AWAM, Family Frontiers et al., as quoted from a press release

After the controversy came another plot twist. Shahidan came forward and said that his appointment on the committee was only temporary, as his name was only on the list as a placeholder until a more suitable candidate has been found. He added that he was also “already in too many committees“, further brushing off criticism by claiming that the committee is “set up by the parliament, not activists“.

Okay, cool, he’s only on the committee temporarily. But why are people still so angry?  The answer is probably obvious, but we’ll cover that later in the article. But if you really don’t know, you might want to know that…

1 in 10 children are sexually abused, and this number only increased during the MCO 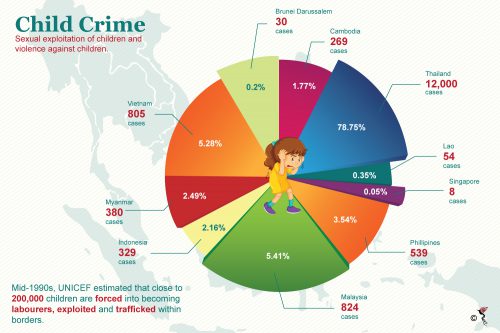 If you look at the chart above, you’ll find that Malaysia scored second only to Thailand in child sexual crimes. Normally, we’d rejoice at getting second place in any other competition, but the fact that this is about sexual crimes against children is just plain discomforting.

The thing is that 1 in 10 children are sexually abused in Malaysia. A lot of them are allegedly perpetrated by the people the children trust, such as the parents and religious leaders, regardless of what religion they worship. And here’s what makes it worse: only 2% of child abuse cases are reported, which means that there can be many more children who’ve been sexually abused but kept quiet.

“There is always a mismatch between actual prevalence of abuse cases and abuse cases reported to the authorities.” – WAO Advocacy Officer Yap Lay Sheng, in an interview with Cilisos

And the MCO’s only made it worse.

Not only have domestic violence hotlines seen a spike in domestic violence cases in the MCO, it’s also been reported that child sexual crimes have increased in that time. To start with, AWAM Program and Operations Manager Nisha Sabanayagam told us that they’ve received calls related to child sexual abuse almost everyday!

In fact, 40% of the calls on the AWAM hotline in the MCO came from minors. According to Nisha, this is because the victims are trapped in the same house as the perpetrators, making it easier for them to be abused. And when it happens too many times, it’ll only drive the children to really seek help, like calling the AWAM hotline.

“The cases are related to attempted rapes and child molestation, leading to mental problems and depression.” – Nisha, in an interview with Cilisos

And it’s not just the NGOs. Even the cops themselves have noticed an increase in child sexual crimes, especially incestuous ones, during the MCO.

All these only seem to make it more important for a separate select committee for children’s affairs, which the parliament has done this year. And it would have been a good thing, but…

Shahidan’s ‘temporary’ appointment may have made it ineffective

As we’ve asked earlier in the article, even though Shahidan was only on the committee temporarily, does it really make a good excuse?

“It’s not an acceptable excuse.” – Nisha

According to them, the fact that his name even made it on the list cast serious doubt on the overall credibility of the committee. Given that it’s a committee focused on the welfare of women and children, who are often victims of sexual assault and abuse, appointing an alleged sexual predator will only make it ineffective.

“Shahidan’s appointment, with his history of child molestation allegations and objection to the formation of this very committee, seems more like a mockery of the committee’s critical function in the times of the pandemic.” – Nisha

Yap told us that children don’t report their sexual abuse experience because of a lack of trust towards the authorities and they’re afraid they will be dismissed. As such, temporary as it may, the fact that an alleged child molester was part of the committee in the first place may only foster more distrust among the victims.

Share this article:
NAH, BACA:
Are teachers taking their punishments too far? Here are 6 other cases of Malaysian student abuse.