*This article was originally written in BM by SOSCILI. Click here to read it.

On 17 Sep 1957, when our country was less than a month old, having gained independence on 31 Aug, we became the newest Commonwealth nation to join the the biggest and most powerful intergovernmental organisation in the world – the United Nations. By unanimous vote, Malaya was admitted as its 82nd member.

It must’ve been a proud moment for Dr. Ismail Abdul Rahman, the first Malaysian chosen to represent us at the UN, when he was ushered to the rostrum to address the delegates. For his inaugural meeting that first day of the 12th General Assembly, he showed up wearing something other than what the UN delegates would have been used to at the time. And carrying something that would scare the diplomacy out of most people if you unsheathed it and waved it around.

We’ve gone from that, to first ever Asian woman in the UN, who is former Penang Mayor Datuk Maimunah Mohd Sharif. Yep, we have some pretty noteworthy UN delegates. Here are 5!

1. The Deputy Prime Minister who brought the first keris to a UN meeting TTDI in full baju Melayu and tengkolok. Sorry we couldn’t find a pic with the keris :'( Img from outlet.historicimages.com

You would imagine the United Nations meeting to be filled with no-nonsense men in suits. Then, among the sea of black, is this guy wearing traditional baju Melayu, complete with tengkolok (Malay male headgear that you’ll see Sultans wear), and at the side of his hip hangs a keris! And that was the first time a weapon was ever worn to the UN General Assembly. Well, that’s one way of commanding the room.

“Our admission to the United Nations was spectacular. We all dressed in the national costume – or at least those of us who had them. In addition, I had a kris tucked into my waist. This was the first time that a weapon of any kind had been brought into the General Assembly of the United Nations.” – Tun Ismail, quoted from ‘Malaya’s First Year at the United Nations’

This guy is Tun Dr. Ismail Abdul Rahman, Malaysia’s very first Ambassador and UN delegate in 1957, when our country was still known as Malaya (as you can see on placard in the pic above).

Imagine being the new guy and walking into the UN like what up I got a keris. Must’ve made quite an impression on the other delegates… and make an impression he did. You see, Tun Ismail did not bring the keris as a talking piece to break the ice. Nope, he had a very strong statement to make, just like Hishamuddin, but the message could not be more different than the keris-waving Defense Minister. He was making it clear that Malaysia will not side with any warring country, be it the Western countries, America, or Communist Russia. Of course TTDI could also be seen dapper in a suit. Image from ktemoc.blogspot.my

Tun Ismail wasn’t afraid of bringing up uncomfortable issues during his debut meeting of 25 Sep 1957, for instance the impact of colonisation on Africa, the Middle East and Asia. In fact, he taruh to their face saying colonised countries were used as pawns in their ideological war. He wasn’t gonna sugarcoat anything to be anybody’s Mother Teresa. The best part of his speech was when he used this Malay peribahasa:

While he served at the UN, Tun Ismail wrote personal notes to the Prime Minister which were later compiled and published in a book ‘Malaya’s First Year at the UN’. You can buy it on Amazon or here, or borrow it from the library. 2. The guy who made it all the way up to highest rank…President! Why hello there, Mr President. Image from malaysiaunsc.kln.gov.my

The highest rank a Malaysian delegate has ever made, is that of President of the UN General Assembly. It happened in 1996-97 through Tan Sri Razali Ismail, who at one point served as Special Advisor to PM Tun Mahathir Mohamad. He was the 51st President of the UN.

Among the reasons he was appointed President was because he’d been active in the UN for several years, including being a Permanent Representative (sometimes called a UN ambassador) for 10 years (1988-98). He was also concurrently the Ambassador to Cuba, Jamaica, Saint Lucia, Barbados, Trinidad and Tobago. On top of that, Tan Sri Razali had served in various capacities in the UN, for example:

Up until 2005, Tan Sri Razali was Secretary General’s Special Envoy for Myanmar, where his role was to quell tensions between the Burmese government and Aung San Suu Kyi supporters (the opposition). One of his triumphs was getting Aung San released from house arrest in May 2002. However, his impartiality in this role was questioned by American officials and info on his alleged business ties with the Myanmar military junta was released on Wikileaks. Later, the junta repeatedly denied him entry, which made him eventually quit the special envoy status. 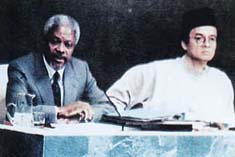 With Tan Sri Razali, it was always about improving humanity. He criticised the UN because he saw that it had become dominated by certain parties who prioritised their own agendas and political power, rather than helping the world. He added that the UN often failed to resolve important issues through its Security Council, for example during the conflict in Chechnya and Rwanda.

“The UN is no longer effective in addressing international issues, including in negotiations between governments. Its laws and regulations are 20 years old and until now there are no clear and strong provisions.” – Tan Sri Razali, Utusan

After retiring from his career in the UN, he became the Chairman of SUHAKAM (a statutory body established by Parliament under the Human Rights Commission Act 1999), since April 2016. He still keeps himself busy doing humanitarian and activist work today, heading a foundation named Yayasan Chow Kit for the welfare of displaced children. He also chairs Najib’s brainchild, the Global Movement of Moderates Foundation.

3. The PAS ulama who headed a Malaysian delegation to the UN Then in March 1975-77, he was appointed Malaysian Ambassador to Iran, at the time when Iran was still under the rule of the Shah before it got overthrown by the Iranian Revolution (the incident when women’s dressing went from mini dresses to fully covered). Yusof Rawa’s duties simultaneously was also to “break into” the Afghanistan and Turkey “market” because our country had not yet established an embassy in there.

Once he returned, Yusof Rawa threw himself into his work in PAS, being chosen as Deputy President of the party, before becoming President from 1982-89.

4. The country’s Founding Father who became a Permanent Rep at the UN Known by his peers as a soft-spoken man, who, according to Mahathir, never threw shade at anybody, Tun Omar Ong Yoke Lin was one of MCA’s founders in 1952. Together with Datuk Yahya Razak from UMNO, they formed the MCA-UMNO alliance and the country went on to gain independence.

When the Indonesians gaduh with Malaysia in 1963 because they didn’t want us to form a country, the incident became known as the Indonesian-Malaysian confrontation. Tun Omar was the man of the hour, chosen by Tunku to defend our cause and seek support at the UN. This resulted in then UN Secretary-General U Thant (yes, we named a Taman in KL after this guy) sending an independent mission to check out whether onot the people of Sarawak and Sabah wanted in.

They found that people were in favour and Tun Omar became one of the signatories of the Malaysia agreement signed in London in September that year. So, he can be said to be a founding father of two nations – Malaya in 1957 and Malaysia in 1963. Tun Omar was Ambassador to the US from 1962-72. Img from viweb.mysite.com

Tun Omar also served as Ambassador to the US for 10 years from 1962, where he managed to set a meeting between his Finance Minister Tun Tan Siew Sin and the President of the US Lyndon B. Johnson. It was unheard of for a minister of any government to meet the US president.

He was a gracious host as well and would provide a good Malaysian meal to anyone who visited New York or Washington. Former Health Minister Tan Sri Chong Hon Nyan’s wife, Eu Ngoh, recalls helping the embassy staff clean taugeh for the noodles served for the Merdeka Day celebrations. “And all his (Omar’s) American friends expected to eat satay, so we had to get the coconut from Miami and serai from another part of Florida. It was great fun,” said Eu Ngoh, who was the Deputy Director of Social Welfare.

5. The first Asian woman to hold the prestigious UN-Habitat post To everyone at the Penang Island City Council (MBPP) in Komtar, Datuk Maimunah Mohd Sharif was boss and mentor, but as of 20 Jan, the Mayor closes that chapter. Now, say hello to the first Asian woman to hold the post of Executive Director of the UN Human Settlements programme (UN-Habitat). Her appointment meets Sec-Gen Antonio Guterres’ promise to see more women in the organisation’s senior positions.

UN-Habitat is considered one of the international body’s most active agencies, focusing on sustainable urban living as the world’s population grows. This should be fun for Maimunah who was a town planner. She will oversee 2,400 employees, 4 regional offices and activities in more than 70 countries. Maimunah’s tearful last day of work at the City Council. Img from The Star

Other Malaysian women have also served in prestigious posts in the UN. One is Tan Sri Rafiah Salim, who was the Assistant Sec-Gen for Human Resource Management at the New York HQ from 1997-2002. Another is  astrophysicist Datuk Dr. Mazlan Othman, appointed by Kofi Annan in 1999 to serve as Director of the UN Office for Outer Space Affairs (UNOOSA) in Vienna. She returned to Malaysia in July 2002, but 5 years later reprised her role at UNOOSA after being appointed to second term by Ban Ki-moon.

No Malaysian has since brought a keris to the UN. But like Tun Ismail we’ve kept the stand on peace PM Najib speaking against extremism at the UN General Assembly 2014. Img from un.org

Since Malaysia joined the UN on 17 Sep 1957, our engagement with the global body has grown. We are part of its many programmes: UNDP, UNFPA, Unicef, UNHCR, WHO, UNU, WFP…*inhale*…UNDSS, UNAIDS, Unido, Unesco, UN Women, OHCHR, UNCTAD, UNCITRAL, FAO…*wheeze* ICAO, IFAD, ILO, IMO, ITU, UPU, WIPO, WMO, UNWTO and HURHURHUR (we made up the last one).

We’ve contributed our own capable men and women who’ve helped shaped its policies. We’ve served in its Security Council and Human Rights Council, although we lost a spot in the latter last year  🙁  We are also active in almost ALL its peace-keeping missions… 30 missions to be exact, deploying 29,000 armed personnel.

These 61 years, we’ve continued to maintain our very first UN representative’s stand against supporting war. Tun Ismail might have been glad to know we’re the 8th biggest Asian contributor to the UN’s peacekeeping arm. As more Malaysians make us proud on the global stage, we look forward to being able to say, “hey, that’s my countryman up there”, and err maybe even, “is he carrying a keris in the UN?!”