What are some of the things you’ll think about off the top of your head at the thought of something like human immunodeficiency virus (HIV) or acquired immunodeficiency virus (AIDS)? Some misconceptions would probably be like gay sex can cause it, HIV and AIDS are the same thing, and that you have to stay really far away from them if you don’t wanna get infected.

In Malaysia, there’s a certain stigma around the illness that we don’t really hear much about them, much less talk about them. Heck, apparently, Malaysians tend to shy away from the LGBT community or sex workers just because there’s an idea that it’s easier for these communities to contract HIV, even though scientists have said that drug users can get HIV just as easily due to the fact that they share needles.

However, that’s not the case with this 71-year-old woman called Fadzilah Abd Hamid, whom many would respectfully address as Matron Fadzilah. 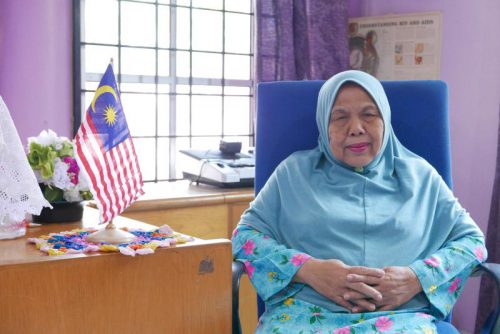 Somewhere in Kampung Permai, Ampang, sits in an unassuming double-story bungalow. And if you don’t enter the bungalow, you probably wouldn’t know that it’s actually a halfway house for women and children afflicted with HIV, and it’s called Rumah Solehah. In case you don’t know, a halfway house is essentially a shelter that allows people like ex-prisoners, mental patients, and drug addicts to learn skills to reintegrate into everyday life.

Rumah Solehah is one such house for HIV-afflicted women and children. Not just that, it’s said to be the very first HIV shelter in Malaysia. And the brain behind it all resides in Matron Fadzilah, as pictured above. Fortunately, we also managed to get in touch with Matron Fadzilah herself to tell us more about Rumah Solehah.

Before Rumah Solehah, Matron Fadzilah was actually a nurse, and a very experienced one at that! Having been a nurse since 1970, she has a vast amount of experience as a public health nurse, where she tended to patients in rural areas. According to Matron Fadzilah, she specialized in women’s healthcare and got to learn more about inherent drug use in rural communities alongside the rise of HIV cases.

“I was sponsored by the Health Ministry (MOH) to join the National Counseling HIV/AIDS Training Unit in St. Charles Hospital, London.” – Matron Fadzilah, in an interview with Cilisos Rise of HIV cases in the 1980s and so on in Malaysia. Image from Wikipedia

Due to her experience, the MOH then approached her to set up a rehabilitation center for HIV-positive sex workers in KL. According to Matron Fadzilah, the project was supposed to located in Sepang, costing around RM11million. In the end though, the government at the time ended up scrapping the project entirely.

But that didn’t deter Matron Fadzilah at all. In fact, she went ahead and decided to start small as an NGO with the assistance of the Islamic Medical Association of Malaysia (PPIM) and a small grant from MOH, which was how Rumah Solehah came about in 1998. And just like the rehab center, it started out as a shelter for HIV-positive sex workers.

“My nursing experience helped me a lot in managing the shelter and taking care of the residents physically and mentally.” – Matron Fadzilah

Still, despite having been sent for a counseling course in London, Matron Fadzilah found that she still didn’t know much about HIV or even sex work in the local context, which was why she had to do field research to educate herself about it. And one way of doing that was by literally visiting red light districts in KL, like Chow Kit, and talking to cab drivers and sex workers.

“That’s when I knew that there’s a lot of exploitation in this line, and I realised that I must do this project.” – Matron Fadzilah, as quoted from CNA

However, as time went on, Rumah Solehah began opening its doors to other women and even children who are HIV-positive, especially Muslim women. And when you think about caregivers in shelters – be it an orphanage or old folks’ home – the image you have will probably be of gentle tones and loving smiles. Matron Fadzilah, on the other hand, has a different approach.

Matron Fadzilah has the moniker ‘Kak Bomoh’ for her methods 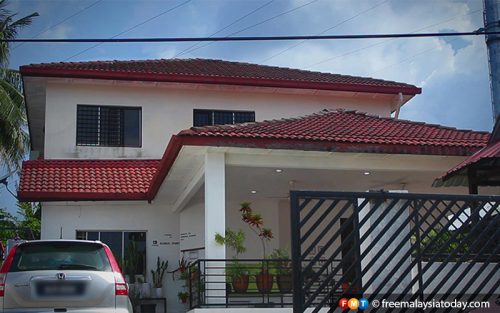 Running a shelter isn’t as easy as you may think. One cannot just get a house, let some people stay there, and be done with it. We think it’s safe to say that you occasionally have clashes with your family members when you live under the same roof – so now imagine that, but with a group of women who don’t really know each other and have different personalities, that would probably be more chaotic.

And that’s the case with Rumah Solehah in its early days. Apparently, Matron Fadzilah posed a commanding figure within the shelter. Well, she doesn’t exactly beat up the residents, because that would be abuse. No, she’s simply known for being very strict and has a tendency to nag at the residents about discipline and cleanliness. And believe it or not, the residents are actually glad for it, because it proves that she truly cares about them.

“I like it when she scolds me. I treat it as friendly banter, like something between a mother and daughter.” – A Rumah Solehah resident, as quoted from CNA

Her stern behavior had earned her the moniker of ‘Kak Bomoh‘, and she seemed to be proud of it. Matron Fadzilah’s basically the Edna Mode of Rumah Solehah.

When we asked Matron Fadzilah about it, she told us that it’s because she had some trouble in the early years because she had to deal with different women of different backgrounds, causing personality clashes and attitude problems. And it was then that she learned that she had to be firm to keep the shelter in order.

“If we aren’t firm, then they won’t get anywhere, because their cognitive functions are poor. I have to remind them to tidy the house, eat vegetables, take medicine on time, and think positive.” – Matron Fadzilah

She is more than happy to take in more HIV-positive residents who need the help and safety of a shelter, but…

NAH, BACA:
Here’s what happened to Malaysian minds and bodies a year after the MCO

The ultimate purpose is to ensure they can return to society After all, Rumah Solehah is a halfway house, which means that eventually, the residents will have to leave and live their own lives.

According to Matron Fadzilah, the residents that Rumah Solehah receive are mostly referrals from doctors who specialize in infectious diseases in various hospitals. And when these residents go to Rumah Solehah, most of them are said to be of poor mental conditions, especially those were previously sex workers, where they don’t have the will to live anymore. She even told us that there have been many times when the women would be sent to the shelters on stretchers.

“They have long been exploited outside, and when you combine that with an illness like HIV, the result is low self-esteem. Our job is to get them back on their feet and help them achieve their aspirations, while tending to their physical problems as well.” – Matron Fadzilah

But of course, it isn’t all about nagging and scolding. At Rumah Solehah, the staff will always encourage the residents to identify what they really want in life and then guide them to learn what they need in order to achieve their aspirations, despite the looming stamp of having HIV. As such, other than teaching them health basics to make sure that the residents don’t accidentally transfer fluids, Matron Fadzilah’s also pushing these women to take responsibility for chores around the house and make themselves useful. For example, she keeps them active with a daily schedule of cooking and cleaning – sometimes, even when entertaining visitors.

“We help these HIV-positive women confront the stigma by developing their self-esteem, confidence, and proving their worth in their contributions to the society through the simple skills they learned while they were with us.” – Matron Fadzilah

At this point, you might be wondering: why is Matron Fadzilah doing so much for people with an illness that can’t be cured? Well, this is because at the end of the day, Matron Fadzilah thinks that…

HIV is nothing but a virus

…and that the inherent problem ultimately lies with the victims’ attitudes, either towards themselves or the outside world. Once, Matron Fadzilah received an HIV-positive woman who she claimed to have refused to drink or eat, and ended up dying from dehydration, further adding that the woman did not die from HIV, but from depression, ultimately.

“HIV is not the problem. The problem is their behavior. You’re not going anywhere if you keep thinking about dying.” – Matron Fadzilah

And turning these women’s lives around, even with HIV, became Matron Fadzilah’s goal in taking them in to Rumah Solehah with her ‘tough love’. As of today, Rumah Solehah has taken in more than 400 HIV-positive women and children, and according to the founder, there have been many success stories where the women managed to go on and set up their businesses or even return to become volunteers to those suffering the same fate.

“I get happy with the little things.” – Matron Fadzilah, as quoted from MIMS Today

It’s been more than 20 years since Matron Fadzilah established Rumah Solehah in 1998, and it doesn’t seem that she’ll be stopping anytime soon, even though she’d unfortunately been diagnosed with a heart condition at her old age. She was even awarded the Tun Dr Siti Hasmah Award in 2018 in recognition of her work at Rumah Solehah. At the end of our interview, she told us that the only thing she hoped to see was for society to be more accepting of HIV-positive women, whether they’re sex workers or not, so they would no longer need a shelter like Rumah Solehah.

“Our Holy Quran clearly states that for those who have transgressed, remember that Allah is most loving and forgiving. Who are we to discriminate, when Allah the Creator has promised that.” – Matron Fadzilah