Trivia time: other than being the first day of the holiday season, what else is there to December 1st? Yep, and it’s an annual effort held all around the globe to commemorate those who have died from the disease while giving solitary support to those who are living with it. Now, growing up we’ve always had these pertandingan melukis and all that, exposing us Malaysian kids to this the danger of AIDS and HIV and how it kills.

But as we move on into different phases in life, we forget about the disease. Unless someone in particular in our lives has the disease, then chances are we’d probably know about it a little more. But for the rest of us, the knowledge about AIDS is like a tiny chunk of meat at the back of our brains – we know it’s there, but we don’t know much about it. So fast forward to today… What DO we know about the disease in Malaysia’s recent times?

1. Kelantan has the highest number of AIDS cases

A model state with low crime rate, Boss Level morality, and always the frontliner in saying ‘NO’ to Valentine’s Day, PDA, etc. – that’s Kelantan. So it’s gonna come as a shock to you guys (or maybe not) that Kelantan’s vices are way over its head.

The state has consistently recorded the highest number of cases for AIDS in our country since 2008! Bbbut bbb but, they have like separate swimming lanes for men and women over there. How did the disease spread?!

Malaysian AIDS Council President Datuk Dr. Raj Karim explained that it’s partly due to the location of the state which borders Thailand. Sooo…

“Many men cross over to the neighbouring country, especially Sungai Golok and Hat Yai, without the knowledge of their wives, and then passed HIV and AIDS to them.” – Datuk Dr. Raj Karim, Malaysian AIDS Council, New Straits Times

And because of this, the women too are exposed to AIDS through their spouses and boyfriends, which have put them on top of the list compared to women in other states. Malaysian AIDS Foundation Secretary-general Hisham Hussein said that HIV incidence there is 28.8 cases for every 100,000 in the population – DOUBLE Malaysia’s total incidence. Scary!

2. 6 AIDS experts lost their lives in the MH17 tragedy

My thoughts & prayers to families of those tragically lost on flight #MH17. Many passengers were enroute to #AIDS2014 here in #Melbourne.

Technically this isn’t a statistic about the disease among Malaysians, but it relates to one of our biggest, most heartbreaking national tragedies. Among the passengers on the downed MH17 plane were big time AIDS researchers and activists who were flying to the International AIDS Conference in Melbourne. One of them was Professor Joep Lange from the Netherlands, who was known among his colleagues as ‘the father of AIDS research in developing countries.’ Joep Lange. Image from The Guardian.

When news of the Malaysian plane first broke, it led to the myth that over 100 AIDS experts had been on board, but the truth was that there were only 6 of them, according to the International AIDS Society.

The others whom the world has lost are:

With about 50 countries in big ol’ Asia, our extended region is host to a large number of people living with AIDS/HIV. Although some countries within this region are seeing a decrease in the number of cases, our numbers are red, indicating an increase. According to a report by UNAIDS (2012), 12 countries account for more than 90% of people living with HIV and more than 90% new HIV infections in the Asia and the Pacific. As it turns out, Malaysia is ranked 8th in Asia and 5th in South East Asia. 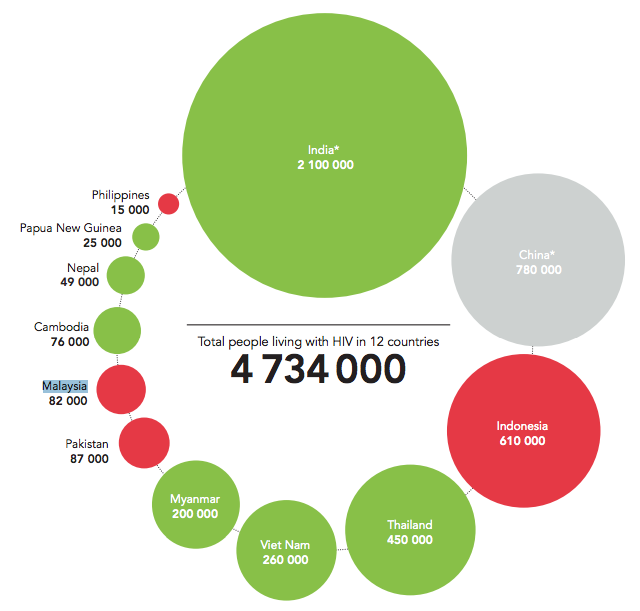 However, because treatments are improving by the year, living with HIV or AIDS is no longer a death sentence but a manageable chronic condition. In efforts to eliminate the infection among children, our country is performing significantly better than most countries in our region. According to the CDC National Prevention Information Network (link goes to The Body, an HIV/AIDS site), 99 percent of babies born to HIV-infected women were uninfected by the virus. Women, Family, and Community Development Minister Daluk Rohani Abdul Karim attributes this to the success of our country’s Prevention of Mother-to-Child Transmission program which reaches out to pregnant women, their partners and infants.

4. Sharing needles isn’t the main cause of infections… It’s sex between men and women.

While the infection trend in Malaysia was predominantly from sharing of needles, the trend has changed in recent years. UNICEF shared that in 2010, there were 40% more newly-reported HIV cases attributed to heterosexual sex, which was a huge increase from 27% in the year before that. In a shocking report by The Star over the weekend, Professor Dr Adeeba Kamarulzaman, Chairman of the Malaysian AIDS Foundation, said that there were 74% new HIV infections in Malaysia that was sexually transmitted. She adds that it’s a drastic two-fold increase in just five years. 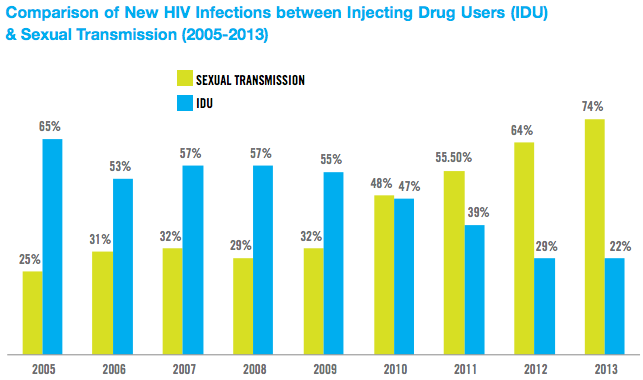 So what’s up? Perhaps the drop in IV transmission could be because of the Ministry of Health’s focus on drug substitution therapy and needle exchange programmes for drug users, which has been going on for a few years now.

“The alarming continued rise in new cases of sexually transmitted HIV – over 70% of all new cases in 2013 – warrants the immediate establishment and mobilisation of the proposed national task force for mitigation of sexual transmission of HIV.” – Datuk Dr. Raj Abdul Karim, President, Malaysian AIDS Council 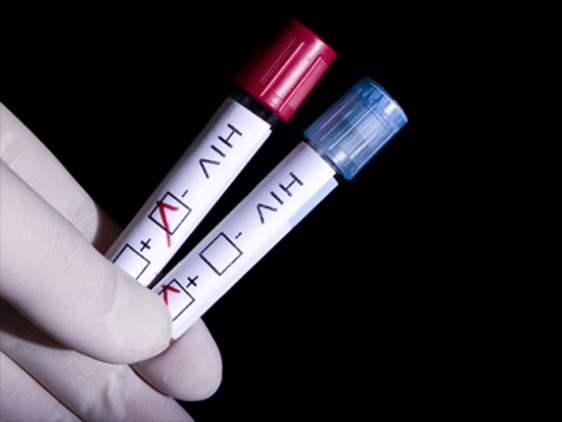 On International AIDS Day 2001, the Johor Islamic Religious Council issued a fatwa that made HIV tests compulsory for any Muslim couples wanting to get married. This eventually became a nationwide thing in 2009 with recommendations for non-Muslims to do the same.

NAH, BACA:
Feel that your favorite char kuey teow is underrated? Get it onto GrabFood with one click

The effectiveness of this ruling in reducing the spread of HIV is still being put into question, with an equal number of supporters and detractors. This has also led to discussions of a person’s right to privacy, medical ethics, and follow-up support for those who have tested positive.

On the bright side though, there’s no nothing preventing the marriage from proceeding provided if the couple still wants to go ahead regardless; except additional counseling provided by the state religious and health departments.

6. More Malaysian women are being infected with HIV In 2001, the ratio of HIV positive men to women was 10:1. Fast forward to 2013, this ratio is now 4:1, meaning that more women are being infected with the disease. Assuming that this isn’t due to better testing regulations (such as the mandatory HIV testing previously mentioned) which has led to more cases being detected, what would be the cause of the rise in HIV cases among women?

So wait, how are they getting infected then?

Well, for a number of reasons ranging from a lack of proper sex education to the submissive role of women in society. According to Jan Beagle, deputy executive director of UNAIDS,

“It’s all linked ultimately to the economic and social empowerment of women” – As quoted from Trust.org

Many of the housewives infected with HIV are said to come from backgrounds where coerced sexual intercourse and strict obedience to husbands is the norm, even when it comes to condom use.

Because HIV/AIDS is commonly seen as a male oriented disease, women are usually neglected when it comes to studies (when was the last time you read anything about female drug users in Malaysia?), support, and regulation.

What we’ve strung together here are mainly numbers from reports and statistics, scratching just the surface of what could easily be an iceberg the size of Everest. One of the most important things which we didn’t tackle in this piece is the ignorance of the public towards the disease itself, which we think is the first step in doing our part to help those who live with this horrible disease.

Check out our freelancer Hanna Alkaf’s eye-opening article about some of the hurtful, horrible comments several Malaysians who live with HIV have had to endure here.

Because at the end, ignorance is not always bliss.