Back in 2013, there was one article that claimed Malaysia was one of the most dangerous countries in the world. The article didn’t even mention where it got its info, but it became viral, so PDRM had to release a statement on Facebook to deny such allegations.

And then recently the nightmare returned when another site – international travel website WorldAtlas – claimed Malaysia had 4 cities which are in a list of the Top 10 MOST DANGEROUS cities in Asia. Can you guess which 4 cities? They are KL, Petaling Jaya, Klang and Johor Baru. Here’s the order: According to the site, Karachi is the most dangerous city. Image from SAYS Facebook.

Then Malaysians all started hooha-ing about it… (Some of you might be wondering huhh Syria is in Asia meh? Us too. When we checked out Wikipedia, Asia covers West Asia, which includes Syria, Palestine and Saudi Arabia.)

Ok la actually WorldAtlas did say their article does not include war-torn regions, sooo obviously it’s safer than Syria. Instead they only take into account crime problems, like muggings or robberies, assault, corruption, and even racial and religious intolerance, which is said to be widespread in these Top 10 cities. The article used information from this site called Numbeo, which is crowd-sourced – that means ANYONE also can contribute to the data through an online survey. In fact, you can click here right now to fill up the form for KL’s crime index.

Additionally, the data is not based on statistics and crime reports from governments or police organisations in any way. It is taken from 15 survey questions that are PERCEPTION-based, so the questions are like: “In the past 3 years would you say the crime increased?”, and “Do you feel safe walking alone at night?”, and the participant needs to select from a Strongly Agree to Strongly Disagree range.

On top of that, they don’t have a big enough sample size to prove the data is very accurate. For example, for the Klang crime index… only 21 people contributed at the time of publishing! 21 people! That’s less than the number of people in your morning bus to work! Klang’s population is almost 277,000, how can claim that Klang is the fifth most dangerous city in Asia based on 21 people’s answers?!

So all of these factors combined, the WorldAtlas data can pakai onot you say?

But here’s a more credible source on safety AND how it affects the economy! 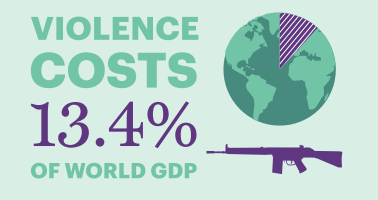 We found this study called the Global Peace Index (GPI), which ranks countries (not cities) by their level of peacefulness, covering 99.6% of the world’s population. The index is composed of 23 qualitative and quantitative indicators, across these 3 broader themes (on page 101):

NAH, BACA:
Did this Malaysian just save the human race with a medical breakthrough?

But what makes the GPI very interesting is how they can sort of “calculate” the value of peace from an economic perspective (ie. peace = economic prosperity). For instance, violence in Malaysia cost the country 3% of its GDP. And the index even tries to propose positive peace methods explained below: Now the most important part… where does Malaysia stand? We rank 28 out of 162 countries. Screenshot from GPI

Using GPI’s data, if we were to make a ‘Top 10 most dangerous Asian countries’ list, the ranking would be (number in bracket is global ranking):

We didn’t include the war-torn countries though, otherwise Pakistan would be No. 1, instead of North Korea! So yeah, to claim that we have 4 of the most dangerous cities in Asia, a bit far-fetched kot. Malaysian authorities have the stats and stuff on crime, and the recent statements that they’ve released show:

The Performance Management & Delivery Unit (PEMANDU) also reported that crime index has decreased an average of 6.6% from 2009 to 2014 (read the full PDF report here). However, the general sentiment among Malaysians is that these figures are not accurate. More on this later…

Aaaaaand naturally the police issued a statement after this recent WorldAtlas article. IGP Khalid said it could not be possible that crime stats from the 4 cities are so vastly different from that of many other Asian cities. We leave it to ugaiz to decide…

While each of you may believe different things about the crime rate in Malaysia, we would really like to know what the masses are thinking.

As we found out, a lot of Malaysians don’t believe in these gomen statements. 50% of the population believe crime has gotten WORSE, while 40% believe it hasn’t changed, according to Datuk Nur Jazlan Mohamed, the Deputy Minister of Home Affairs and Pulai MP. (He was quoting the results of a safety study by Frost & Sullivan.)

It’s acceptable to believe that crime rates are actually higher than figures show because crime is underreported here, as Teh Yik Koon criminologist at the National Defense University of Malaysia explained. She believed there’s a sense among Malaysians that it’s hopeless to rely on the police. Also, critics of government statistics pointed out that the government had changed its way of presenting statistics by focusing on what it calls ‘crime indexes’ rather than detailed accounting. And did you know, the gomen has also stopped reporting crime to the UN?

It’s not surprising that Malaysians would be skeptical of government statistics la, but what’s important is to weigh things properly and research-research around before just taking anyone’s word for something. So checkout something carefully before sharing k gaizzz. 😉