[Editor’s note: If you like what Cancer Research Malaysia is doing, you can support them through donations by clicking here]

We Asians are built differently. We’re mystically good at math, our cuisine is (arguably) unmatched the world over, but as if to tip the scales a little, we have some habits that make us more susceptible to oral cancer. For real though, 70% of all people who have oral cancer are Asians. Back home in Malaysia, those of the Indian ethnicity are most susceptible to this type of cancer, though the other ethnicities aren’t that far behind.

Those stats came from the good people at Cancer Research Malaysia, a world renowned non-profit organization dedicated to researching cancer among Asians. And here’s something else: they’re developing an oral cancer vaccine that we may see in the market within 5 years. You know they have massive street cred when their work has been published in the New England Journal of Medicine AND the journal Nature!

Needless to say, we were burning with curiosity, so we got in touch with Cancer Research Malaysia to bombard them with questions about oral cancer and the vaccine they’ve been developing. What surprised us the most was…

The oral cancer vaccine has been 10 years in the making

Science looks like this a lot of the time.

Any astute reader who followed the progress of the C-19 vaccines development will have noticed that they were rolled out a mere 10 months after we started our MCO. That’s not usually the case when it comes to drug research or even science in general. Professor Datin Paduka Dr. Teo, Chief Scientific Officer of Cancer Research Malaysia told us that:

“If only we could do that with all drugs, right? Treatments and therapies would be available to patients a lot faster; the tradeoff is that there will be a lot less time spent to figure out whether the drug will have any side effects. The pandem*ic necessitated the quick development of C-19 vaccines, but it’s a very rare exception.”  – Professor Datin Paduka Dr Teo Soo Hwang, OBE

The process of drug development is a long and complicated one. Cancer Research Malaysia has spent 10 whole years (so far) to research and develop the oral cancer vaccine. As of now, the vaccine is looking to enter phase 1 of clinical trials. That’s right, these things are done in stages. Here’s a cute infographic of how the phases are broken down:

Img from Frontiers in Immunology

According to Prof. Teo, the oral cancer vaccine could be commercialized in as little as 3 years, but a more realistic timeline would be 5 to 7 years if the research goes as planned (we’ll be coming back to this later, so just keep that somewhere in the back of your brain). For now, let’s turn our attention to the existing treatment options for oral cancer patients.

While oral cancer may not sound as menacing as, say… lung cancer or breast cancer, it’s effects can be devastating. We won’t include any pictures here, but if you wanna see for yourself, *trigger warning* – click here.

Nowadays, if the doctor catches your oral cancer in its early stages, they’ll probably recommend that you get a surgery to remove the offending tumour. Small tumours can be removed relatively safely with minimal chance of the cancer coming back to haunt you, while larger cancers or ones that are hard to reach present a higher risk of complications. For advanced oral cancer, surgery, chemo, and radiotherapy are all on the table. The king of awkward moments at a party.

If you clicked to see the pictures we linked earlier, imagine how removing a chunk of your cheek or tongue to rid the tumour would impact how you speak or eat. Fortunately, scientists have come a LOOOONG way in making treatments more effective and less invasive since the early 20th century. Other cancers such as breast cancer have also seen great progress in terms of treatments and survivability. A study done in 2017 also showed that the number of mortalities from breast cancer have dropped by about 40% in the last 25 years. But for oral cancer, the mortality rate is still sky high.

A study by Hospital USM Kelantan found that among their patients, most oral cancer deaths occurred within the first two years after diagnosis, and only 18% of patients survive longer than 5 years. Why is oral cancer so deadly, you ask? It’s usually because patients don’t seek out treatments until the disease is far too advanced to be treated. And while the current treatments available to us are great at removing the tumours, they can’t reverse whatever has already happened. 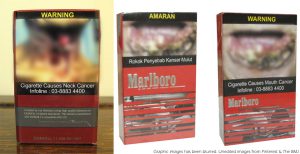 After 2 hours with Prof Teo, this writer will never touch cigarettes again. *Grotesque images have been blurred

Here’s where Cancer Research Malaysia comes in with their magnum opus: the oral cancer vaccine. How does it work, though? 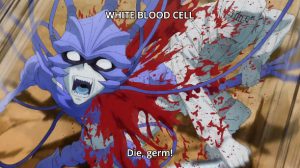 Yeah, there’s an anime about cells in a human body. The dude in white’s an immune cell.

Picture this: your body’s a massive city, and in that city, there are immune cells acting as the police. They drive around in their police cars to spot dangerous criminals like viruses and kill those harmful thugs, thus keeping your body safe from harm. But cancer cells are like criminals who disguise themselves as everyday citizens, hiding from the police in plain sight. 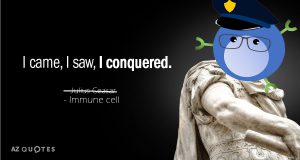 Pretty much how it works. Original img from Az Quotes

By combining the oral cancer vaccine and a form of immunotherapy called checkpoint inhibitor, your immune cells will be able to identify, hunt, and kill the oral cancer cells with minimal harm to your body. Under lab conditions, testing with the vaccine has resulted in:

While it may sound too good to be true, using your own immune system to fight cancer is not a new thing, and has been widely researched by the medical community. What Cancer Research Malaysia has done is to take it a notch further, turning it into a vaccine that trains your immune cells to hunt and kill cancer cells, stopping it in its tracks. It’s super commercially viable too, since it can be made for cheaper compared to some other drugs out there. So, is there a catch to this vaccine? Side effects maybe?

Truth be told, we don’t know yet, because it’s just entering the first phase of clinical trials.  And that’s really a huge deal considering the fact that…

The pandammit almost got their research canned

Earlier, we mentioned that we might be able to have the oral cancer vaccine in the market in like 5 years… but that all hinges on whether Cancer Research Malaysia gets the funds it sorely needs.

You see, Cancer Research Malaysia has been operating all this time while relying on funding from public donations and research grants. But since the C-19 wave hit our country’s shores, most of their funding were pulled back to fight the more immediate threat of the panda Mick.

Thanos be snapping away their research grants

Frankly, this is a plea for help. Because of the public support they’ve had in the past, Cancer Research Malaysia is now really close to creating the first therapeutic cancer vaccine, so that oral cancer will no longer be a death sentence for us and for our future generations. So if you support what they’re doing, you can help them by making a donation here. After all, if we don’t support them in finding treatments for common cancers in Asians, who will? We’ve gotta #kitajagakita!

This writer did his part, now he just needs more Malaysians to do the same.

Beside that, they’re also looking to expand this vaccine’s uses to treat lung and liver cancer, which could potentially help 3 million lives in the not so distant future! The potential for further breakthroughs are tantalisingly close… if they can afford to get there.

If you’re not sure how to donate or if you want to make a donation via analog means, here’s a handy donation guide! And if you can’t afford to donate, you can still help by sharing this article so it can reach more potential donors 🙂