How well do we know cancer? Well, based on a recent study, it seems that at least half of Malaysians would know that mysterious lumps on your body can be a symptom of cancer, and that smoking, radiation, and being generally unhealthy can all lead to it. But that’s just scratching the surface of what there is to know about cancer.

For starters, ‘cancer’ is basically the umbrella term for more than 100 diseases where cells that go haywire and copy themselves like no tomorrow. Cancer can also happen in almost all parts of the body, even the blood. Here’s another cancer trivia. Do you know that cancer may also be racist?

Okay okay we’re being a bit dramatic, but just a bit, because there’s more! On the surface, it’s not that far fetched of an idea. After all, cancer is sort of a genetic disease, and what race you are is determined by genetics. If you pull up data from Malaysia’s National Cancer Registry Report 2012-2016, it seems that more Chinese people get bowel and lung cancer than the other races, while Malays seem to get more leukemia and bladder cancer. So you can say that cancer may have some racist-ness to it, but it’s a bit more complicated than cancer refusing to rent out space in your spleen to certain ethnicities or something.

To find out more on this, we did some reading and spoke to Cancer Research Malaysia, a local non-profit organization that studies cancer among Asians. As it turns out…

The differences between races are wayyyy more than just genetics 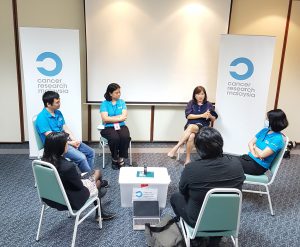 As we’ve mentioned earlier, cancer is a genetic disease: mutations in a cell’s genes cause it to grow out of control, causing cancer. Since different races have different genes, it should only be logical for different races to get different cancers, right? Well, that’s only part of the reason. According to Cancer Research Malaysia’s Chief Scientific Officer, Professor Datin Paduka Dr Teo Soo Hwang, OBE, cancer’s racist-ness can be attributed to three things:

For example, if you are to compare an Indian woman living in Malaysia to a Caucasian woman living in the US, you’ll see that both these people are different not only in their genes, but also in the environment and culture they grow up in as well as the foods they eat every day. These differences add up to make these two people vulnerable to different kinds of cancer. But how, exactly?

Well, let’s take a look at the genetics component first, through the family of a hypothetical Malaysian Indian lady that we will call Devi. Because of their family’s genetics, the women in Devi’s family have dense breasts, meaning that their breasts have more breast tissue than fat. This puts Devi (as well as the other women in her family) at a higher risk for certain breast cancers. Devi’s family is also quite short…

…but that may actually be a plus when it comes to cancer. Apparently, being tall has been associated with a higher risk of developing certain cancers like breast and prostate, so being short gives Devi’s family members a lower risk of getting them. These are just two examples of how the genetics of a certain group of people can influence how likely they are to get certain types of cancer, but as we’ve mentioned above, there’s more to the racist-ness of cancer than just genetics.

The environment and lifestyle that Devi was brought up in may also affect her chances of getting certain cancers. Devi’s family have a habit of chewing betelnut, and they also enjoy preserved and processed foods. These habits seem like harmless Asian things to do, but they may actually increase Devi’s risk of getting certain cancers: chewing betelnut has been linked to oral cancer, while eating preserved foods have been linked to nasopharyngeal cancer (cancers behind the nose).

Less obviously, Devi’s culture may also affect her through her diet. At the risk of stereotyping, let’s say that Devi’s family are vegetarians who enjoy curry.

Eating a diet rich in fruits and fibre and low in red and processed meats had been linked to a lowered risk of cancer. In addition, besides the spices used in the curry affecting her body’s resistance to certain cancers directly, they may also influence what kind of bacteria lives in her gut. This makes her gut bacteria different from someone who normally eats Italian food, and it is known that people with different bacteria in their gut may respond differently to certain kinds of cancer treatment, either by making the treatment more or less effective.

Most of the available cancer research weren’t focused on Asians 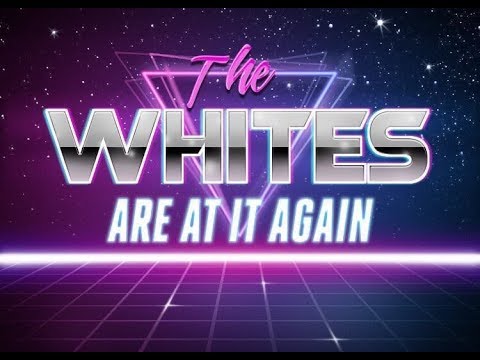 For reference, Caucasians is the scientific term for wypipo. Img from Kore’s YouTube.

As we’ve briefly mentioned above, some Asian habits like chewing betelnut and eating preserved or processed foods may increase your risk of getting oral and nasopharyngeal cancers. While these cancers are huge problems in parts of Asia, they didn’t make the top ten biggest cancers globally. These cancers are very rare in the Western world, which is a disadvantage for us because that’s where the bulk of cancer research happens. In fact, until very recently, most of the cancer research had been focused on Caucasians.

Still, we ended up with a cancer database where 95% of the samples were from Caucasians, and from what we’ve mentioned in the previous header, the knowledge we get from this database won’t perfectly apply to Asians, who makes up roughly half of the world population. To give you an idea of why that’s a problem, think of Caucasian cancers as pasta and Asian cancers as rice. While you can technically boil rice the same way you boil pasta, the resulting rice probably won’t be as good as it should be. No… you ruin it. Imgs from Nigel Ng’s YouTube.

Thankfully though, someone is studying Asian cancers, and…

That someone already came up with a vaccine for oral cancer

So we see that there’s a need for more research on Asian cancer samples, and Cancer Research Malaysia is working on that. In fact, they’ve managed to establish a database of cancer cell lines collected from local cancer patients, and this greatly increased the number of Asian cancer samples that we have to work with. One of the most impressive things they’ve managed to do with that data has been creating a vaccine for oral cancer from scratch.

Yep, you’ve heard that right. By analyzing local samples of oral and nasopharyngeal cancer cells, they’ve found that they’re slightly different from normal cells. The vaccine they’ve created will train the patient’s immune system to recognize these differences, enabling them to attack the cancer cells. 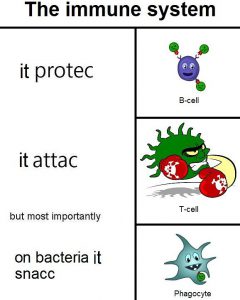 So basically this, but the snacc is kanser

While it’s still awaiting human trials, it’s practically the first ever Buatan Malaysia vaccine for cancer, which is quite the accomplishment. What more, this is just one of the many breakthroughs this Malaysian organization has achieved.

“…the fact that we have got this far is really proof that Malaysia/Malaysians can do good quality research that creates a possible therapy to go into human trials. [It’s] an incredible milestone that we’re really, really proud of.” – Professor Dr Cheong Sok Ching, co-inventor of the cancer vaccine, to Cilisos.

With such an achievement under their belt, and more to come in the future, you might be surprised to know that…

They achieved all this while also trying to get funding

Cancer was (and still is) quite the scary thing to have, but Cancer Research Malaysia is trying to change that through research. However, their main difficulty so far has been funding. Originally established through fundraising to research oral cancer, you can kinda tell from this article alone (and this one here) that they’ve gone wayyyyyyyyyyyyyyyy beyond what they were originally set up to do.

Thing is, researching cancer ain’t cheap: building up that Asian breast cancer database we spoke of earlier, paying the researchers’ salaries, buying the chemicals needed for their research, keeping their high tech machines functional, and all sorts of costs that go into cancer research can really add up, so they need a huge amount to keep operating. For now, they’re covering these costs through research grants – most of them international – and sponsors, which are mainly corporations like Yayasan Sime Darby, Yayasan PETRONAS, Khind Starfish Foundation, Scientex, the Esteé Lauder Group of Companies, and Vistage, to name a few. But these aren’t always the easiest to come by because they’re competing with other organizations for funding.

To keep themselves going, they will need to find new ways of funding themselves, so we’re gonna be straight up and be direct about it – Cancer Research Malaysia is looking for donations from the public.

“Oh, sure, Cilisos.” you might say. “Let me just write out a check for one million ringgit right now. Y’all think I chop money is it?” Well, if you’re a billionaire or you really do chop money, that would be great, thanks. But it doesn’t have to be that much. We were told that at one point, Cancer Research UK managed to raise 800 million pounds for cancer research, and a huge portion of that didn’t come from big corporations, but rather about a million regular donors who donate as little as 10 pounds a month.

We’d like to believe that we can do that, too. So if you support what Cancer Research Malaysia is doing and feel like helping them out, check out their donation page by clicking on the image below. You can either make a one-off donation or set up a regular (monthly) donation for any amount you’re comfortable giving.

It doesn’t have to be a lot, and it doesn’t have to be a regular thing, but if you do donate, that money will go towards keeping a competent local cancer research body in the fight against cancer. It will go towards a better understanding of Asian cancers and, hopefully, a better chance to detect them early; leading to better cures and treatments, and a better chance of people surviving them.

And who knows? With your help, maybe someday in the future, getting cancer won’t be such a scary thing anymore.