In times of peace, Silat is mostly demonstrated as a performance art commonly seen at traditional Malay weddings, but it is not to be forgotten that the combative elements of the art are still widely taught as a form of self-defense among the Malay community.

In fact, Silat has been tried and tested against numerous opponents over the years, even believed to have been used against the Portuguese when Afonso de Albuquerque Gold, God, and Glory’d his way into the Malacca Sultanate. 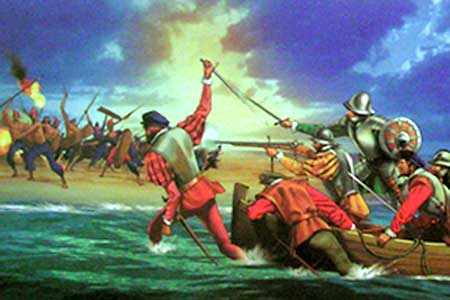 Silat played a major role in the defense of Malacca when the Portuguese invaded in 1511. Image from: Malaysia Track

It is worth noting that there is no one ‘true’ form of silat; its forms and styles are extremely vast, each one differentiated according to lineage, geographical location, and emphasis on certain movements. Thailand and Indonesia have their own forms of silat – Silat Pattani and Silat Pencak, respectively.

But among the many different styles, one little-known form from Penang called Siku Dua Belas stands out in particular, due to its unique emphasis and interesting history.

It was secretly created to defend against the Japanese

Siku Dua Belas (Twelve Elbows) was created by an English-educated surveyor named Sheikh Mohamad Ghulam Meah (also known as Dada Meah), a Penangite of Jawi Peranakan, Minang, Arab, Benggali, and Pashtun descent. As with most, if not all martial arts, it was born out of military conflict; the Japanese occupation of Malaya being the main factor in this case. Back then, Malayans were prohibited by the Japanese from organizing any form of gathering or martial arts practice, but Dada Meah realized that the Malayan community needed a way to defend themselves against the Japanese invaders. A dedicated martial arts instructor of multiple disciplines, Dada Meah developed the Siku Dua Belas style by incorporating different silat and even western fighting styles that he knew – It’s even said that Dada Meah’s main influence was legendary 1920s American boxer William Harrison ‘Jack’ Dempsey (aka ‘The Manassa Mauler’).

“Actually Siku Dua Belas, as I was to find out is very different from that (existing forms)… the art was based on his (Dada’s) extensive experience in styles of Silat native to Penang as well as his training in other arts including western boxing.” – Zainal Abidin & Sutton, ‘Silat Tua: The Malay Dance of Life’ Jack Dempsey, ‘The Manassa Mauler’. Image from: Our Community Now

Recognizing the need for Malay martial arts to evolve with new, modern threats while still retaining the traditional aspect, Dada Meah incorporated elements from other martial and movement arts such as various forms of silat, Muay Thai, judo, jiujitsu, kenjutsu, silambam, yoga, and taichi to name a few. Dada Meah during a training session. Image from: maajoomedia

And so, similar to how Bruce Lee created Jeet Kune Do, the most effective elements of these various arts were compiled to make up a new system, featuring three syllabuses with emphasis on strikes, ‘gentle but swift’ movements (or ‘bunga’ in silat terms), and concluding with weapons training. Being an old-school strongman himself, Dada Meah also emphasized endurance training in the form of lifting weights, push-ups, and other body exercises.

NAH, BACA:
Venomous or not? Here's a handy list of snakes commonly found in Malaysian houses

The three syllabuses were designed as phases for the gradual evolution of a Siku Dua Belas student in deepening his or her knowledge of the art. The first of these is the elbow exercise phase, which familiarizes the student with the basics of elbow combat. The second, the drilling component, trains the student to retain the information learned from the first phase by practicing the moves with a drilling partner; while the third component, sparring, tests the student’s ability in live combat training.

While the first and second phase are meant to last an average of 2-3 years, the third phase is said to be a state of lifelong learning, a common ethos often taught in Japanese martial arts.

A scene from ‘The Last Samurai’ depicting kenjutsu, one of the many styles incorporated into Siku Dua Belas. Image from: Ninja State

From surface observation, it does look a lot like Muay Thai. Because of the limited range of elbow strikes, Siku Dua Belas practitioners continually close the distance with constant forward movements; along with other Muay Thai elements such as offensive roundhouse kicks and defensive push kicks, as can be seen in the video below (there’s even a guy who says it looks like Tomoi/Muay Thai):

On the other hand, the armed component of Siku Dua Belas appears to borrow heavily from Silambam, the traditional Indian martial art of staff fighting.

To avoid getting in trouble with the Japanese, Dada Meah and his followers first started by practicing this hybrid style of silat in secret but it quickly gained traction among the locals and, soon, many Penangites from schoolkids to the elderly were training in Siku Dua Belas.

While the idea of the first ‘mixed’ martial art is generally credited to Bruce Lee, it’s remarkable to think that a Penangite surveyor had thought of it first, even before Bruce Lee was out of the crib. But unlike Jeet Kune Do, there are a couple of reasons why you’re only hearing about this for the first time.

The first is that Dada Meah asked his followers to not start teaching until they themselves have mastered Siku Dua Belas, which is kinda hard since the third phase is considered one of lifelong learning. The second is simply that there hasn’t really been enough media attention paid to the style, outside of a brief highlight or mention in articles for Silat enthusiasts – perhaps making it even more secret than it was during the Japanese Occupation.

But the art is still taught today (mostly in Penang) by the descendants of Dada Meah and his followers, still honoring Dada Meah’s wish for the younger generations to not worship foreign cultures while belittling their own. and to make “Penang, Master of World Martial Art“.

Bonus: Check out this silat demo in Germany by Maul Mornie, the last known living instructor of Silat Suffian.

Credits to Awis Alqarni Mohd Yusoff for providing research for this article.