[This article was originally published in January 2020, and had since been updated to reflect current events.]

In 2019, then Malaysian correspondent for South China Morning Post Tashny Sukumaran came close to starting Malaysia’s own #MeToo movement when she tweeted about her experience of being sexually harassed by a male dermatologist. But instead, she was charged with criminal defamation after said dermatologist lodged a police report against her.

THREAD on sexual harassment.
1/ This evening I went to a clinic called Nathan Skin in Bangsar. The dermatologist, Ruban, touched my legs inappropriately.
I am sharing this as a warning to others. Trolls will probably not be blocked, but I might remember your name on Judgment Day.

There’s no surprise that sexual harassment can happen any and everywhere, and to anyone regardless of gender. It’s found that most reports of sexual harassment – if they are reported – came from women. Of course, we are aware that men are also liable to sexual harassment, but that’s an article for another day.

Tashny’s case is a bit out of the ordinary because it actually made the news cycle, but there are actually a lot of women who experience sexual harassment on a daily basis that are not reported anywhere, so we decided to reach out and ask them for their stories. And here’s what we found…

Do bear in mind that most of the respondents have asked to remain anonymous, so all pseudonyms will marked with an *.

Tan Tee May was once a victim of stalking. She used to have a habit of walking home, and was regularly followed by a stranger back to her house from a park in her neighborhood. It began with him first approaching her and asking her rather intrusive questions one day, and ended up with him following her every step. Tan‘s recount of her experience.

But despite having told him she didn’t want to associate with him at all, he didn’t exactly relent. He only stopped following her when she finally couldn’t take it anymore and yelled at him.

“It was really irritating and terrifying. When a woman says she does not want you to bother her anymore, she means it.

“Why can’t guys just understand a simple signal like that?” – Tan Tee May

And if you think stalking just stops there, it gets worse sometimes. There was one time Shay* was walking down the streets with her sister when they noticed a seemingly homeless man trailing behind them with a hand down his pants (you can guess what he’s doing). Shay’s recount of her experience

Naturally, she just hurried away with her sister, but the memory lingers.

“It was disgusting and horrifying because I was just trying to walk the streets with my sister. Next thing I know I’m being followed by a scruffy looking man trailing and jerking off to us from behind. Nina’s recount of her experience.

But after the experience, Nina was left somewhat disturbed and only grew to understand what she had experienced when she had grown older, which was why she had to see a therapist to help process the entirety of what happened to her.

“I didn’t really understand it because I was eight. But after what happened, I started becoming obsessed with learning about sex and everything related, like I didn’t want to be caught off guard again and have my innocence ripped from me, in a sense.” – Nina

These are cases that border on the extreme, and perhaps not a lot of Malaysian women have experienced them. The one thing that ties these together is that they are commonly seen as forms of harassment. Remember this, because we are going to address this later on.

Okay, so the thing is: sexual harassment isn’t that simple. What Malaysian women do go through are some behaviors or actions that most would probably see as normal, such as…

“When wearing baju kurung, I can feel their eyes undressing us” – Anonymous

When our editor put a Facebook post, asking what kinds of sexual harassment his lady friends have experienced, ogling and catcalling turned out to be the majority:

Really, we think these say enough.

“I wasn’t wearing short shorts, but I felt a guy touch my butt twice.” – Suki

Suki told us that a stranger touched her butt twice within the span of a few minutes. And it wasn’t even in private – it occurred in a two-dollar shop, where she was only planning to pick up some correction tape. Suki’s recount of her experience.

If you didn’t read the entire thing, one thing that she pointed out was that when she told her mother about it after, her mother’s reaction was not to be angry at the perpetrator, but to laugh at Suki for wearing shorts in public places. And Suki felt undignified from the whole thing.

“I was so angry and uncomfortable. I don’t think it’s good to tell people that what they wear will turn them into sexual harassment targets.

“Parents play an important role to teach their kids about the opposite sex and right and wrong.” – Suki

But butt slapping doesn’t just happen with strangers; friends can do the same thing too, which is what happened to Veronica*. She was hanging out with her friends, and happened to be wearing a fairly tight dress. She caught one of her male friends staring at her, after which she tried to create a distance. Despite her efforts to create a distance though, he ended up walking up and slapping her butt as a compliment. ಠ_ಠ 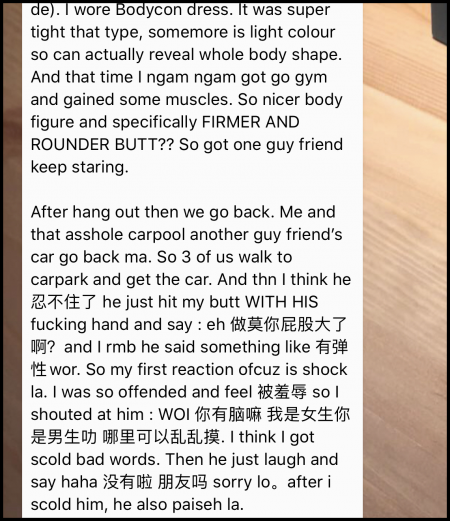 Some people have different ways of recalling experience, ok?

After the incident, Veronica* had grown more careful in her outfit choices and the people she hang out with.

“Now I’ve become afraid to wear tight clothes when hanging out with male friends. That incident has gotten me very aware of what I wear when I hang out with certain groups of people.” – Veronica*

“Everyday, married men at my workplace tell me how much they want to do me.” – Jasmine*

Jasmine* has experienced a lot of sexual harassment in the office, where married men seemingly felt no shame in catcalling her or discussing her body parts, despite the wedding rings on their fingers. There were apparently even occasions where they would discuss how much they wanted to have sex with her.

“It felt degrading. I felt like I’m a piece of meat when men’s gazes are on me. It makes me feel very self-conscious when I wear tight clothes. It’s a bit difficult because I feel confident in them, but I don’t like it when men catcall and say obscene things.” – Jasmine*

Jasmine* said that she couldn’t really do anything except brush it off. Even when she complained to her superiors, she would get shut down easily – and changing her clothing style didn’t exactly change the working environment.

“It’s not easy to call them out because the men surrounding them would back them up and tell me to learn to take the compliment. When I complain to a superior, I’d just be told to cover up so men won’t act that way towards me but even just wearing fit pants and a T-shirt wouldn’t be enough.” – Jasmine*

And she wasn’t the only one to experience sexual harassment at the workplace. In her last workplace, Kate* had experienced a similar situation with her editor, where he would keep sending her private messages that had flirtatious or sexual undertones.

Kate’s recount of her experience

And she wasn’t even the only one; Kate told us that a lot of other women in the office were also victims of such actions. But when they reported it, the women would just mysteriously disappear from the office. ಠ_ಠ

“He was also one of the golden boys, so in a way I guess he was ‘untouchable’. I did not report him to HR, but I brought it up with my associate editor, which wasn’t enough in retrospect. From what I know, he is still working in that organization.” – Kate*

So over the article, you have seen many stories. You’ve seen stalking, ogling, catcalling, workplace misconduct etc. They all may sound different, but there is one thing that they all have in common, which is…

To make it simple for you, here’s the current status for protection for women against sexual crimes:

On July 20, 2022, it was reported that the Sexual Harassment Bill had been passed in Dewan Rakyat through a voice vote, after several postponements over the last two years. However, as we’ve recently pointed out, there are still quite a few improvements that need to be considered before it becomes an Act.

So without strict laws in place, it can make it difficult for the victims themselves to actually do anything that could bring them justice. And this little trivia might be able to answer one question that you could have after reading all those stories, which is…

Why did almost everyone we interviewed ask to be anonymous?

We don’t know if everyone we’ve interviewed was aware that there are no laws against such incidents here, but the fact is that it doesn’t matter, because the main reason for it could be social stigma.

According to a survey by YouGov, only half of Malaysian women who have experienced sexual harassment have reported or told someone about it. And here are some of the biggest reasons why they refrained from saying anything:

And if it happened in the workplace, it could also lead to the possibility of them losing their jobs, easily creating a hostile workplace environment.

“I think most women are afraid to come forward because of the repercussions – no one takes them seriously and they are at risk of losing their jobs. There are sexual harassment laws at the workplace but I think the weight they carry is little.” – Kate*

Even when a woman is brave enough to call someone out for sexual harassment, they could get charged in court, like Tashny Sukumaran did when she tweeted about her experience with a dermatologist. Fortunately for Tashny, attorney general Tommy Thomas withdrew the defamation charges against her just a few days ago.

It probably also doesn’t help that there is a culture of victim blaming when it comes to sexual crimes due to a “boys will be boys” culture. It’s a mentality that implies that it is natural for girls to bear the brunt of boys’ misbehavior, bringing forth the idea that men are entitled to sex, and so the women are responsible to provide it.

I started using Gillette because of this ad. GIF from gfycat

When asked what could be changed about the sexual harassment – for the lack of better word – culture, they all had similar answers, which was to provide proper sexual education and what is right or wrong should begin from childhood.

“We need to start with younger generations. Some men behave this way because they were not raised to be accountable.” – Jasmine*

What is most important though, if there’s anything to be learned from the stories, is that these women are not alone in their struggles. And just because they don’t report it doesn’t mean they can just shrug it off.

Before we end this article, there is one story that we didn’t tell you, and that’s because it gets a little graphic and we don’t want overwhelm you after the stories above, but we will leave you with something she told us when we asked how it had affected her, which pretty much sums up what it’s like for women who have experienced sexual harassment:

“When I got home, I took a long shower, scrubbing every inch of my skin to get that feeling off. It didn’t work. A few years later, that feeling still lingers. I still think of it.” – Rita*

Share this article:
NAH, BACA:
How to explain Ubat Lelaki Kuat to kids