Politics in Malaysia can get pretty messy sometimes, and we’re probably familiar with incidents of name-calling, non-PC insults, and sabotage between our elected officials. But all of these are much easier to put up with when you consider the alternative :

For all the bickering that goes on between them, it’s very rare that a politician actually gets murdered in Malaysia. But it has happened, of course:

However, when talking about political murder in Malaysia, there are perhaps few cases as intriguing as the murder of Dato’ Mohamad Taha Talib, the State Assembly Speaker of Negeri Sembilan, in 1982.

And the person who was accused of the crime was equally high-profile – the alleged murderer was Dato’ Mokhtar Hashim, who was the then-Culture, Youth and Sports Minister.

Now, many of us might be too young to remember this sensational piece of news in the 80s, so let’s go back in time and try to make sense of this mysterious case…

Dato’ Mokhtar Hashim was a killer…..politician in UMNO At the age of 43, Dato’ Mokhtar Hashim had already achieved a lot in the Malaysian political scene. An alumnus of the Malay College Kuala Kangsar, he achieved a double success in 1974, winning the parliamentary seat of Rembau-Tampin uncontested AND becoming Deputy Minister of Agriculture. Eventually he landed the role of Minister of Culture, Youth and Sports before the drama started.

By 1982, he had allegedly become involved in an intense power struggle with someone within his own party: Dato’ Mohamad Taha, the then-Speaker of the Negeri Sembilan State Assembly. The two apparently had disagreements over pre-selection of candidates and distribution of development benefits under Dr. M’s New Economic Policy (NEP). 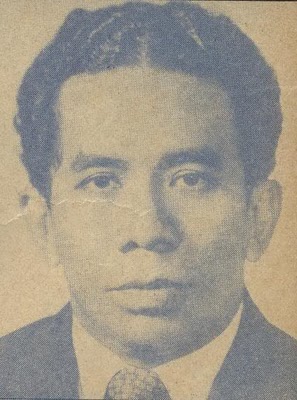 Taha was eventually nominated to a local post instead of the candidate backed by Mokhtar, and Mokhtar was allegedly ‘greatly disappointed’ with the result. In his new post, and with general elections fast approaching, Taha was now in prime position to dismantle Mokhtar’s goals for the future. And so, as alleged by the public prosecutor of his case, Mokhtar and three friends ‘planned to eliminate him’.

8 days before the General Election, the killers cast their bullets

Around 1:30 am, on the 14th of April 1982, Mokhtar Hashim and four accomplices – Noordin bin Johan, Rahmat bin Satiman, Aziz bin Abdullah, and Aziz bin Tumpuk allegedly drove to Taha’s house in Gemencheh, Negeri Sembilan, to lure him out for an ambush.

Not long after Taha exited the house to see who was outside, Taha’s wife Datin Norsiah Othman reportedly heard two gunshots fired outside their home, but she assumed them to be from hunters shooting foxes. Taha’s body was later found with three bullet wounds in his head, chest, and thigh. The killers were nowhere to be seen. The brutal and sensational nature of the murder rocked the small town of Gemencheh, Negeri Sembilan. Image from: PAUdestiNASI

Although investigating officer and future IGP Musa Hassan did not find the murder weapon on-site, he had one crucial clue to follow: two bullets and their casings were recovered from the crime scene. After ballistics tests were conducted on the bullets, they were shown to have been fired from a .32 Walther pistol licensed to… Mokhtar Hashim. A Walther PP .32 pistol, similar to the one allegedly used by Mokhtar Hashim. Image from: Lucky Gunner

This was proof enough for him and, not long after this discovery, Mokhtar was arrested midway through a speech at a function. Together with his four other alleged accomplices, he was charged with the murder of Mohamad Taha bin Talib.

The FRU surrounded the courthouse during the trial

‘This is a straightforward case of cold-blooded murder… When Taha reached the spot where Mokhtar was waiting, Mokhtar shot at him point blank.’ – Abu Talib Othman, Attorney-General in his opening statement

Because of the sensational nature of the murder, as well as the high-profiles of those involved, the case was classified as a special security case, meaning that it would be presided over by a single judge, without a jury (back then we still had the jury system).

FRU units and armed police circled the courthouse during the trial, preventing all but the defendants’ immediate families from entering the courtroom. *For illustration purposes only*. Image from: MalayMail

However, before the trial could commence, the 5th suspect, Aziz bin Tumpuk, died; so the trial continued with the four remaining defendants. All four pleaded not guilty. Mokhtar even refused to resign from his cabinet post, and Dr. M, who had reportedly been grooming Mokhtar for a more senior government roles, had also refused to ask him to resign:

“Why should I? He has not been found guilty yet.” – Dr. Mahathir, Prime Minister

Then, stories of torture and black magic started to surface

It quickly became clear that this trial would not be an ordinary one.

Just two days into in the trial, the defence for Rahmat bin Satiman, claimed that his Section 112 cautioned statement (basically what you say when the police questions you) had been obtained under ‘a brand of torture that goes back as far as the Spanish Inquisition’. Rahmat was allegedly: The defendants’ interrogating officer, Inspector Badaruddin denied the claims, saying he always allowed Rahmat to rest if he wanted to. Image from: Undark

So this meant that they needed a trial-within-a-trial to determine if Rahmat gave his statement voluntarily, and trial judge Hamdan b. Yeop rejected the torture charges and read his statement in court. Its contents were extremely incriminating, and here are some choice selections:

But the fishiness didn’t end there. The prosecution had a key witness in the form of Abdullah bin Ambek, a schoolteacher who admitted to being at the meeting where the suspects planned Taha’s murder. He quoted Mokhtar telling them that “the police would be reluctant to take action against a minister” and, perhaps even more damning….

However, Abdullah later retracted those earlier statements, saying that he was ‘forced and assaulted’ into making them. As a result, he was disqualified as a witness and dismissed by the Judge.

Crucially, this meant that no other witness had actually claimed to have seen Mokhtar at the rubber plantation that night. We’re going to spare you the legal mumbo-jumbo and summarize what happened next:

However, the earlier confusion caused by Rahmat’s torture allegations would later come back to save him.

Upon appeal in 1984, Rahmat’s conviction was set aside on the grounds that his statement (the murder plotting and bomoh stuff) wasn’t given voluntarily. The presence of documented evidence (especially from police diaries) and elements of pressure in witness testimony gave enough reason for the judge to secure his release from Bilik Akhir (the Malaysian version of Death Row):

“As to the long hours and odd hours of interrogation stated in the station diaries this would appear to be suggestive of oppression…” – Eusoffe Abdoolcader FCJ, shortly before acquitting and discharging Rahmat

On the other hand, Mokhtar’s death sentence was commuted (reduced) to life imprisonment instead. Finally, after nearly 9 years of courtroom drama, Mokhtar bin Hashim was pardoned by the Agong and released on the 10th of July 1991, possibly becoming the first ever Malaysian to receive a double pardon.

Mokhtar went off the radar, and the murder is still unsolved

Because getting a royal pardon doesn’t indicate that a person is actually innocent (or that they were guilty but forgiven), and the Agong doesn’t have to give a reason for granting a royal pardon, Mokhtar Hashim’s guilt or innocence cannot be officially proved or disproved. And as such, it can be said that no one knows for sure what happened that night in Gemencheh, Negeri Sembilan.

But there are rumors.

There are unverifiable rumours that it was actually Mokhtar’s brother who did it, but because Mokhtar was unwilling to see his brother hanged, he took the fall for him instead.

As for Mokhtar Hashim himself, not many know a lot about what he’s up to nowadays, although there’s an interesting anecdote from Malaysia Today blogger Raja Petra Kamaruddin.

In his post, RPK talks about a humorous encounter with Mokhtar at the Malay College Kuala Kangsar not long after Mokhtar’s release from Pudu Prison, and later shares some information that was “shared by a chap in Mekah in front of the Ka’abah”.

Apparently 4 witnesses who testified against Mokhtar all had misfortune (allegedly!) befall them: one was run over, the second went bankrupt and lost his mind, the third committed suicide, and fourth suffered a stroke and became totally paralysed.

However, this story cannot be properly verified and, like all stories told by a “someone in someplace”, should probably be taken with a grain of salt. Or 100,000 grains of them.