*Sorry about that horror image now burned into your brains. Don’t panic! It is just a combined photo of our 2 CILISOS writers Uihua and Johannan.

Employers wanting to renew their foreign workers’ Foreign Workers Permit (PLKS) will now have to do it online on MyEG’s website. The new system which started on Jan 5, 2015, got a lot of complaints by people and organisations such as the Malaysian Employers Federation and Malaysian Association of Foreign Maid Agencies because they would have to pay a fee of RM38 and because the change was too sudden.

But the group that loses out big time in this case are the runners. But why do we want runners in the first place? (Runners: Also known as middlemen who used to help employers renew foreign worker permits at immigration counters but now are not needed because of MyEG’s online system). At the end of the day, isn’t it easier to do everything online and cut out the middle person? OK, let’s start with why people are unhappy going through MyEG first…

Why everyone so marah?

Application fees la. To be more specific, the Home Ministry answered that the RM38 would go towards operational costs and management of the services to ease traffic at immigration counters.

And this seems to be the main reason why employers are not happy going through MyEG. Of course they would be because previously through the Immigration Department under the Home Ministry, renewing permits was free!

People are paying taxes and this kind of service should be provided F.O.C. by the Government according to Taiping MP Nga Kor Ming. Some of the employers are small businesses and not everyone is tech savvy, according to MEF Executive Director Datuk Shamsuddin Bardan. So what Small and Medium Enterprises (SME) Association of Malaysia suggested is to run a trial period.

But going to their FAQ page, the instructions are written in a clear and simple way which helps existing MyEG and first time users a lot. Then all the aunties and uncles who really can’t use the computer how? To be fair, MyEG had their people stationed at Immigration Departments to teach employers how to use this new tool so it’s not like people were 100% left in the lurch.

3. The change was very “sudden”

MyEG probably didn’t do a very good job informing everybody because when theSun did some background checks, some employers were still showing up at immigration counters that were closed. It took them by surprise and the only notice given beforehand was a statement on Jan 2 by the Immigration Department. Immigration permit renewal counters were closed by MyEG people were there to teach employers how to use their site. Image from The Star.

Still, it wasn’t a totally wasted trip especially for people who are not tech savvy because they got ‘free training’ from MyEG staff who opened up their own counters at the Department!

(Celaka this CILISOS, think they so tech savvy is it? Know how to upload text and pictures only!)

Should runners even have jobs?

These are people who make money because the system isn’t efficient. But now that you have an online system, it should increase efficiency by a long shot. All it takes is some getting used to, would you guys agree?

And that kinda is the whole point, according to the Home Ministry.

“We are also aware of the complaints by some employers who relied on runners or agents to apply for permit renewals. With the renewal process done entirely online, this situation will cease to exist and agents will not have any opportunity to take advantage of the circumstances.” – The Home Ministry, The Star

In fact, the ‘tontos’ were so upset that they threatened MyEG staff and vandalised furniture at the Immigration Departments, The Malaysian Insider reported!!

That’s scary! But ‘tontos’?! Like Tonto and the Lone Ranger?? At first we were like “use ‘runners’ or ‘tonto’ or ‘middlemen’ ugaiz?” Then a mini zero-budget survey on the Editor’s Facebook helped us decide on ‘runners’. Runner it is… with orang tengah as the runner up? Screen cap from editor’s Facebook.

Someone told us about the difference between runners and tontos…

And there have even been a few cases of gangster tontos harassing JPJ officers. Read about it here.

Sorry for diverting! So anyway, with this new system, tontos lose out on an income of about RM200 to RM300 per transaction, said MyEG.

Eh you guys get to save RM162 if you stop sending runners! Errr but that’s provided if you’re renewing for only ONE worker la… which in this case is not saving, but actually more expensive for employer agencies with a lot of workers.

NAH, BACA:
Anonymous M'sia attacking gomen in a few hours? Real or not?

Anyway, moral of the story is middlemen are never a good thing in any economy, especially if they add no value and their services are expensive. At least on our side we’re all for efficiency and if we can cut out runners, why not?

So here are some things to know about MyEG… Basically, they are the ‘electronic bridge’ between the Government and citizens. It builds and operates electronic channels that deliver services from Government agencies to Malaysians. The company believes that next-generation tech solutions will always be one step ahead in anticipating needs rather than responding to them. Remember this scene? So what MyEG does is cut out this part of your life. Image from The Star.

One time, when JPJ’s platform mySikap was experiencing technical glitches, JPJ told people to try MyEG’s portal as an online alternative – that’s their part in staying ahead of the game!

In short, when you need to settle your saman or renew road tax, you don’t need to send out runners any more. That’s the magic of MyEG! Imagine how much money MyEG can make out of these foreign worker permits. It’s like they won the lottery!

There are about 2.3 million foreign workers in Malaysia and if for each person MyEG gets RM38, they can earn about RM87.4 million!!

However not everything is champagne and strawberries with MyEG. The first thing that naturally worried people was the monopoly held by MyEG and its insurance partner, RHB Insurance. So in the foreign worker permit case, Taiping’s MP Kor Ming brought up these 4 questions, reported in Free Malaysia Today: However, one of our readers, Christopher, who does some work with MyEG explained to us that there’s no monopoly on insurance coz you can get it from other agencies not just RHB, if you don’t want to apply online. He also said that even though there are that many foreign workers in Malaysia MyEG gets only 1.4 million renewals per year. Then the remainder? *Gasp* Could they be….. illegal workers? So here’s the HUGE, in fact, main benefit of switching to online renewals – it will show the government which worker is legal or illegal and who employs the illegals ones. Uhhhh-ohhhh!

This isn’t the first time MyEG’s been in hot water… In April last year, Pokok Sena’s MP Datuk Mahfuz Omar claimed details of the company’s contract for an online tax reporting system for the Customs Department have been sketchy. Putrajaya was not transparent about whether it paid them RM180 million. theSun also reported that it shows the Government will continue undertaking ‘nego-tenders’ with “total disregard for transparency and accountability”.

So should we support MyEG’s platform?

Actually it’s not so much a matter of supporting MyEG than supporting efficiency and online transactions. Of course we would support anything online! We’re CILISOS!

Let’s backtrack a little on the history of how Malaysia’s e-Government services came about. In 1997, everything started with the Multimedia Super Corridor (MSC) to reinvent the way the Government delivered its services. e-Government was launched to enhance the convenience, speed and quality of interactions with the rakyat and enterprises.

And so today, this is where we are: 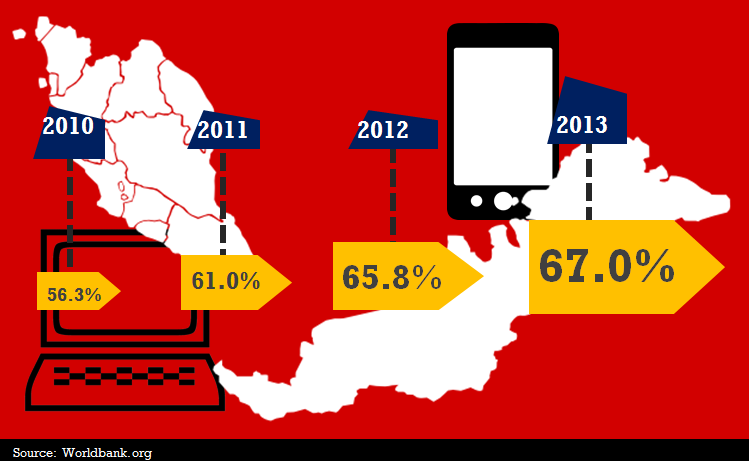 Yep, our Internet penetration (number of users) is 2nd highest in the SEA region at 67%. Singapore is the 1st with 104.2% and 3rd is Brunei at 56%. Wait, howzit possible for kiasu Singapore to get more than 100%?? Actually possible… if one person surfs Internet on TWO devices, then users more than population ta-daaa. That’s percentage… Numbers-wise, Indonesia has the most Internet users at 74.6 million, followed by the Philippines at 34.8 million and Vietnam 32.4 million. Malaysia has the 4th highest number of users at 20.1 million.

Singapore’s eCitizen portal which has 410 e-Services by 61 agencies is growing very fast in citizen usage. But there’s a difference between the Singaporean method and ours. Their eCitizen service is run by Infocomm Development Authority of Singapore (IDA) – a government board – whereas MyEG is a private company.

So if the Government could to address these 2 issues:

1. To make the service free

This is a Government service… and Government services should be free, right? As Kor Ming, Taiping’s MP reasoned: “There is absolutely no excuse to force the people to pay a private company for a service which should be provided by the civil service.”

2. To make the contract transparent

The Home Ministry should be transparent about their contract with MyEG and report the facts and figures publicly. At the same time, they should also cancel out the insurance monopoly. Seputeh MP, Teresa Kok argued this: “Is this a fair and reasonable move to employers and other insurance companies? Why such monopoly for MyEG?”

… Then the answer is pretty obvious – there are a lot of benefits Malaysian citizens can enjoy if we can adapt to the e-System, like not waiting in line in stuffy offices for one. Come on guys let’s upgrade to the next level, yo!

So runners, you might want to start looking for jobs elsewhere. Hey, how about applying with MyEG?