“For example, the hairdressers. A majority of the barbers in the Klang Valley are foreigners. They charge about RM10 for a haircut. The stoppage of hiring foreigners will surely lead to various difficulties, including in getting an affordable haircut.” – said Shamsuddin Bardan, executive director of the Malaysian Employers Federation (MEF). Image from the Star.

Do we still need this much foreign talent? We dug deep into statistics to find out about the prevalence of foreign labour in Malaysia, and ironically the first thing we found was… inconsistent data.

1. The number of documented and undocumented workers is almost the same (which makes them hard to count) Maybe every Malaysian would like to know the estimate for the total number of foreign workers in Malaysia, and researchers at ISEAS-Yusof Ishak Institute have tried obtaining that number. Only problem is the numbers from different sources (quoted by the institute) didn’t seem to match.

One main reason for the numeral gaps is that the total number of foreign workers consist of documented (usually captured by the Home Ministry) and undocumented workers (hard to get because of lack of info).

But looks like the Home Ministry managed to get the rough figure for undocumented workers too. There were 2.1 million registered immigrants and 1.7 million undocumented immigrants (some of whom would have had fake work permits), which together makes up roughly 15% of Malaysia’s workforce. The changes in these numbers can impact wages of certain groups, but not as we would expect…

2.  The arrival of new migrants actually benefits Malaysians’ wages a little more than that of the existing migrant population

Calculations made by the World Bank (didn’t say how they calculated the figures tho) indicate that a 10% increase in migrant population slightly increases the wages of Malaysians by 0.14%.

But, not for the least-educated Malaysians, who suffer a 0.71% drop in wages. Even worse is the 3.94% drop in wages of foreign workers who are already here! 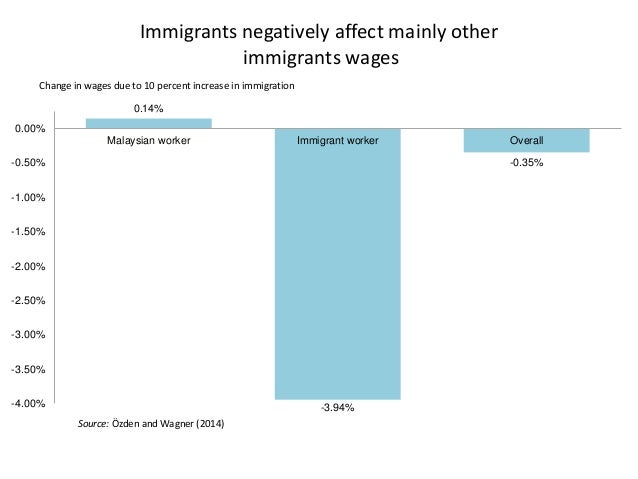 So that means the long-time migrants are more likely to feel the pinch than Malaysians do when the new migrants land here. How sad.. Like they’re already suffering here and missing their families so much that…

3. Foreign workers probably call home more often than you do

About 3 in 5 of the migrant workers surveyed by Nielsen Malaysia own a smartphone, with 78% of them saying that the main reason they have it is to keep in touch with their families, via voice and text messages, chat apps and social media.

“As most migrant workers do not own a laptop or desktop computer or tablet, the mobile phone is the closest friend that they have while in Malaysia. This smart gadget helps them to stay connected with their loved ones and friends.” – said Monjur Elahi of Nielsen Malaysia.

Maybe because of the technological advances that the smartphone encapsulates, they’re able to call home very often, as much as a few times a week. Migrant workers also use smartphones to listen to music, play games and watch mobile TV since most of them don’t own other devices like TV, DVD player and camera. Mainly because their wages are just too low for a decent living. Speaking of low income…

NAH, BACA:
No plans for the weekend? There's a petting zoo in Mont Kiara. With raccoons.

4. Despite the low income, they still send money back to their fambam

According to the same Nielsen Study, foreign workers have a different approach to money management since they’re living away from home. About 65% of the respondents said that they’d send their earnings to their families at least once a month, but the proportion of income (excluding the 20% kept for SOCSO savings) used for remittance varies for each nationality. And to send money to their families back home, about a third of Nielsen’s respondents use third party remittance providers like the International Money Express, Western Union and Merchantrade. For at least 60% of them, the simple process, security and minimum fee charge are the key criteria in choosing a remittance provider.

“These security fears may be one of the key reasons why many migrant workers are more prone to conducting monetary transaction via third party remittance than doing it via the official channels as they are worried that their hard-earned money may not reach their intended recipient or destination.” – said Monjur Elahi of Nielsen Malaysia.

After putting aside money for remittance and savings, what’s left is money for daily expenses, which at least 60% surveyed by Nielsen prefer to buy in small quantities and only when needed, instead of buying in bulk like most of us do. And they don’t just shop like this for food. If you’re wondering why your kakak asks you to help top up phone credit RM10 instead of topping up RM30 or RM50 at one go, look no further. Half of the respondents top up between RM6 and RM10 while a third top up more than RM20. The last time the govt tried to freeze the hiring of workers in 2016, it didn’t really go well for um… manufacturing, construction, plantation and furniture-making sectors (yikes) because it resulted in the shortage of workers and even calls to increase wages to attract local workers.

In fact, studies also claimed that foreign workers do fill the gaps in low- and mid-skilled jobs. Just not entirely. Research by Universiti Sains Malaysia pointed out that various studies have given mixed results about whether foreign workers complement or replace local workers, depending on the sector. Foreign workers are said to be complementary for sectors like services, mining, agriculture and even for science.

Dr M urged Malaysians to be a little more grateful for foreign workers, which seems fair, because they do the jobs that Malaysians usually don’t want. But there’s a downside to that.

Khazanah also had similar sentiments, in that while it might have good short term effects, the longer term goals of moving towards a knowledged-based economy are pretty much handicapped with over-reliance on these poor migrants.

So this time, the decision made to stop hiring foreign workers comes with some other useful stuff. When a recent meeting was held between the Home and Human Resources Ministries about managing foreign workers, they also mentioned stuff like: The meeting. Image from The Star.

With a few disincentives in place, perhaps Malaysians will get reacquainted with doing the dirty work ourselves.