While some may be happy about this, others (especially those turning 18 soon), would probably be devastated by the news that the Malaysia gomen recently announced that the age where someone would be able to drink legally has been raised from 18 to 21. (Aside from also making it compulsory for alcohol to have health warnings stuck to them, just like cigarette boxes have.) 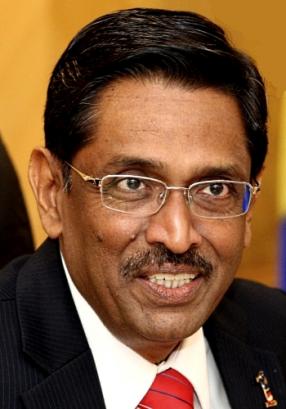 Health Minister Datuk Seri Dr S. Subramaniam recently announced that the Food Regulation Act of 1985 had been amended recently and that the ruling would come into effect on 1 December 2017. He was reported to have said that he didn’t want school or college kids drinking alcohol.

“The amendment is in line with the Global Strategy to Reduce the Harmful Use of Alcohol, signed by all health ministers during the World Health Assembly in 2010 to reduce the availability of alcoholic beverages in the market.” – Health Minister, Datuk Seri Dr S. Subramaniam, as quoted by NST

He was also reported to have said that the age was raised from 18 to 21 years old so that when people start drinking, they would be at a more mature age.

And as expected, the decision created quite the conversation on social media.

Lol the last one.

But making sure that youths are more mature before they start drinking doesn’t sound like such a bad idea right? It may actually protect them and the people around them right? Well that’s what we wanted to find out. So we’ve decided to try and look at the situation in a few other countries. But to determine which countries to compare Malaysia too was also another problem.

Thus the first thing we did was look up the drinking ages for country worldwide, and guess what?

21 is the highest drinking age worldwide According to ProCon.org, the majority of the 190 countries, 115 countries, or 61% of countries actually have a drinking age of between 18-19.  So by raising our drinking age to 21, we’ll actually be one of only 13 countries in the whole world to do so.

The website also goes on to state a few extra bits for other countries like some countries totally banning alcohol for religious reasons, and some countries allowing for underage drinking if under the supervision of an adult. So the minimum drinking ages and restrictions actually can vary greatly from country to country.

But from the many countries, 2 of them looked to be good countries to compare to ours: Indonesia, because they’re a Muslim country in the same region as us but have been said to NOT have a legal drinking age, and The United States of America, because believe it or not, their legal drinking age is 21 years old as well.

Both are probably surprising, but we’ll start with the USA la.

So they went through a similar period that we will go through in December 2017. But the motivations behind them increasing their drinking age were different from ours. While the reason stated by our Health Minister was a lot more general (maturity), in America it was plainly because drunk-driving was a HUGE issue in their country. In the 1970’s, alcohol was a factor in 60% of traffic fatalities in America, and two-thirds of these alcohol-related fatalities involved people between the age of 16-20!

Prior to the implementation of the act, the states in America had their own minimum drinking ages. For example, just say State A had a minimum drinking age of 21, while State B right next to it had a drinking age of 18. So what would happen was that those above 18 but below 21 in State A would drive to State B and drink all they want, then drunk-drive back to State A. This resulted in many drunk-driving accidents involving young people, a phenomenon called “blood borders”.

This led to organisations like Mothers Against Drunk Driving (MADD) pressing for the drinking age to be raised, so that “blood borders” would stop and keep alcohol away from the more immature 18 year olds.

And MADD still continues to campaign against drunk driving in general with pretty powerful ads like this. Image from pabloampuero.com

But has that reduced the number of drunk-driving incidents in America?

Well, there really are 2 sides to this story. On one hand, the US National Institute of Health has said that since the 1980’s, alcohol-related accidents have halved in number with the greatest reduction being from those between 16-20. They also mention that countless studies they did that showed how raising the drinking age not only prevented accidents, but reduced the likelihood of a person becoming dependent on alcohol. 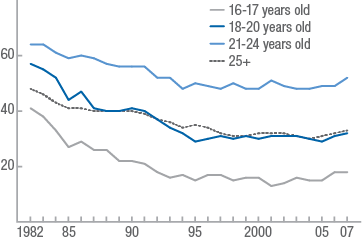 Fatal drunk driving accidents since 1982 for various age groups in the US. Image from iihs.org

On the other hand, others have said that these stats don’t necessarily prove that drunk driving accidents have decreased BECAUSE of the higher drinking age because it may be due to other factors like increased awareness. But while raising the drinking age to 21 did help their drunk-driving problem, it created another problem.

In fact, some have even raised concerns that the US raised the drinking age solely to deal with drunk driving while ignoring the other issues related to underage drinking. People have said that the higher drinking age has caused an increase in binge drinking: because college students can’t drink in public, they drink as much as they can before going to events, which is dangerous because they do it in private and when they are unsupervised. This has led to organisations like the Amethyst Initiative calling for the drinking age to reduced to 18 once again. A street vendor selling alcohol in Bali. Image from BBC.

BUT as we dug deeper, we found that Indonesia did actually have a minimum drinking age of 21. Prior to 2015 however, little had been done to enforce it. And it was so bad that people on tourism websites generally stated that just about anyone could just walk into a convenience store and buy alcohol.

But this eventually led to people protesting against the lack of enforcement, with groups like these calling for a complete ban on alcohol in 2013 to combat the situation. In 2015, Indonesia eventually banned alcohol sales in small shops. And at the heart of this ban is once again, young people, with Indonesia Trade Minister, Rachmet Gobel, stating that the ban was to protect their young people.

But the liquor industry in Indonesia has asked that the gomen consider regulating alcohol instead of completely banning it, and dealing with issues like alcohol smuggling (oplosan or bootleg liquor). The Center for Indonesian Policy Studies (an Indonesian think tank), also stated that banning alcohol would only increase the consumption of smuggled alcohol. So it seems that in Indonesia’s case, there really is no use for new laws if we don’t implement the existing ones. And 3 years on, the debate on whether to completely ban alcohol still continues.

The irony is the USA once banned alcohol completely as well from 1920-1933, and it didn’t really work out so well for them.

So is raising the drinking age the right thing for Malaysia?

The situation in USA and Indonesia can both serve as lessons for Malaysia. On one hand, raising our drinking age alone may not help combat the problem of alcoholism. On the other hand, laws won’t be effective if not paired with proper implementation. Like how many of us knew that supermarkets, hypermarkets and convenience stores are actually not allowed to sell alcohol after 9pm? Image from The Malay Mail Online.

But beyond that, the decision of our gomen to combat alcoholism by raising the drinking age AND making it compulsory for alcoholic beverages to carry health warnings is a bit…peculiar. We mentioned that our Health Minister said that this decision was made in line with the WHO Global strategy to reduce harmful use of alcohol.

However, looking at the document, the WHO doesn’t actually state anything about minimum drinking age. In fact, the 4 things that they make a priority is more along the lines of raising awareness and putting together structures to help people. Columnist Boo Su-Lyn even pointed out that alcohol isn’t as big as a problem in our country compared to other things like obesity.

So while we do want to ensure that our young people drink responsibly, maybe the solution isn’t as simple as changing the legal age.

“Consumers just need to be educated on healthy eating and more importantly, healthy food needs to be made affordable, rather than raising taxes, issuing health warnings, and imposing plain packaging on certain food and beverages.” – Columnist Boo Su-Lyn, on The Malay Mail Online

But then again, remember the feature image you may have been laughing back earlier? It was of a baby that had become hooked on alcohol because of his parents, something that was condemned by a health nutritionist because alcohol can affect the development of children. So we’re pretty sure at the very least, having some sort of minimum drinking age is something we all can agree on.