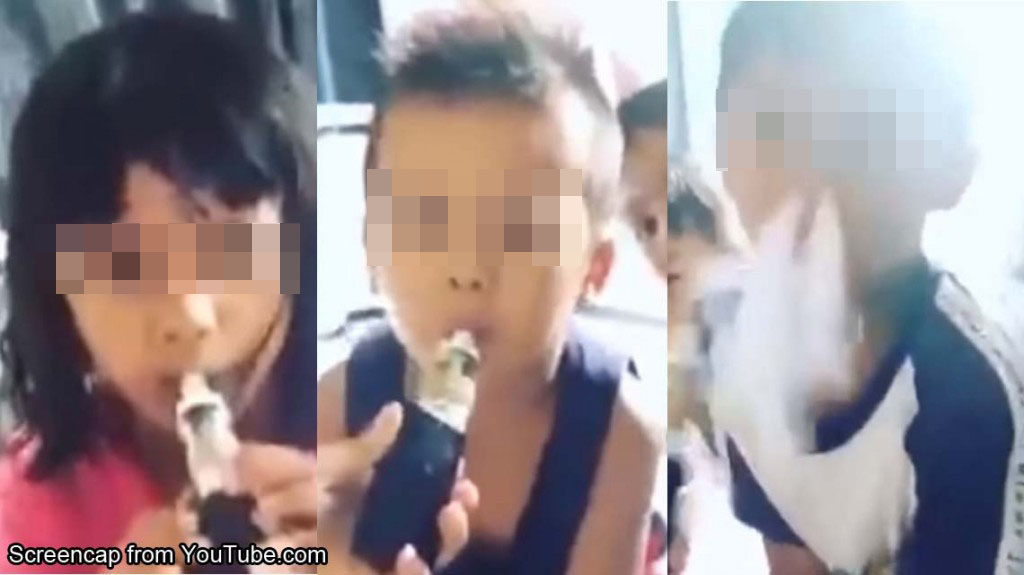 No, the image above is not pictures of 11 year-olds. It’s actually from a video of a Malaysian woman letting her very young children(?) vape. Suara.tv reports that this video went viral very recently after the woman allegedly recorded and posted the video herself, to the ire of many netizens. Suara.tv adds that she is believed to be local from the way she was speaking. Aside from that, we couldn’t find anything else about the woman or kids.

But yea, still doesn’t explain the 11-year olds, that actually comes in the next paragraph. #sorryfortheclickbait

While we don’t know much about this woman, we do know this. Kids vaping? It’s happening. The video earlier shows the woman letting those kids vape, but in many other cases, it’s the kids themselves who pick up the habit.

This was the front page of The Star newspaper a couple of days back. In it, The Star reports the story of an 11-year old with a vaping habit.

“I started about two months ago. My brother introduced it to me. I guess he wanted my parents to think that when the two of us were together, we would not do anything mischievous.” – 11-year old kid tells The Star.

The story goes on to talk about how his brother claimed that almost 40% of his male friends in their area of Kemaman, Terengganu own e-cigarettes, while his female friends vaped too. He also adds that vaping is seen as something trendy. Both brothers were even reported to both have their own e-cigarettes costing a total of RM1,100 but they refused to reveal where they got their money from.

The story comes a few days after the Consumer Association of Penang (CAP) said a survey of theirs showed that kids in primary and secondary school were picking up the habit. This other report by The Star also highlights how it’s not that difficult for them to obtain their own vaping equipment. An example of what a vape starter kit looks like. Image from slimvapepen.com.

These recent reports have led to parties like the Malaysia Consumers Movement (MCM) to release a statement calling for the ban of vape and e-cigarettes. On the other hand, our gomen has been discussing whether they should ban vape entirely (currently only vape containing nicotine is banned) for the longest time (something we discuss in detail here).

And if something is causing our kids to get hooked on huffing and puffing out big clouds of smoke, we really should consider getting rid of it shouldn’t we?

Eh but young kids are smoking cigarettes too? Ban cigarettes….?

Back in 2002, the World Health Organisation stated that 30% of Malaysian boys between 12-18 years old smoke! Furthermore in 2009, their Global Youth Tobacco Survey Malaysia report (done in collab with Ministry of Health) showed that 30% of teens aged 13-15 had smoked a cigarette before and 22.6% of teens “currently use any tobacco product”. (Click here for fact sheet from cdc.gov. It’s a link to a document, so don’t jump out of your chair thinking CILISOS made you download virus.)

The fact sheet goes on to add that as far as tobacco products go, nearly 1 in 5 Malaysians in that age group smoke cigarettes! (While 1 in 10 use other types of tobacco products.)

One of these things is not like the others~~

On the other hand, The Tobacco Atlas (a sorta watchdog founded the American Cancer Society and the World Lung Foundation) also said something similar in 2013. According to them, 17.1% of boys and 1.9% of girls smoke in Malaysia (although they did not specify the age range). They also added we have more boys smoking compared to other middle income countries.

But what was the gomen’s reaction to this? As far as we could find, the Health Ministry has done a few things over the years to deal with underage smoking.

No ban on cigarettes though. But what if it’s because cigarettes are harder for kids to obtain?

How difficult is it to get vapes vs cigarettes?

Well to do this comparison we’re gonna look at 2 aspects: Price and availability.

Cigarettes: One pack of cigarettes is about RM15-17 now.

Vape: The cheapest starter kit we could find on Lazada was RM31 after discount (which btw is a one time thing, so after first month no more di). As for the juice, the general price range was between RM35-40. We asked 2 friends who vaped and they said a bottle could last between 2 weeks to a month, depending on stress (LOL).

Vape, or in other words, a cigarettehobby toy.

We’ll give it a very conservative estimate of one cigarette pack for a week and one bottle of e-juice maybe a month and calculate the cost over a month, this is what we get. (Remember, we’re talking about kids here.)

NAH, BACA:
Health Ministry shuts down one of Msia's largest NGO private dialysis centres. But why?

So vape is actually affordable enough for kids to get it. Especially if they can already afford cigarettes.

Cigarettes: Hawker centers, supermarkets, mini markets, you name it. BUT there are laws that prevent sales to kids (see page 39 of this document).

Vape: Shops selling vaping equipment have been popping up all over the place. The shops are still specialised (so not available at any random shop) BUT there are no laws which prevent it from being sold to kids.

A friend of ours in Kemaman, Terengganu (same place where The Star article about kids vaping took place) even sent us a video of a vape shop situated right opposite a school.

So both in terms of price and availability, it may actually be easier for kids to get their hands on vape! And vaping is dangerous in general right? Banning vape would definitely keep many children away from it (and possibily even prevent people like the woman mentioned at the start of this article from letting their children vape). So banning it to keep people healthy makes perfect sense! Unless…

Smoking VS Vaping: Is this all actually about jaga-ing the health of the rakyat?

Well maybe. Nicotine is actually a controlled substance that can only be purchased legally from pharmacies (see page 37 of this document). Thus the gomen could be banning vape containing nicotine is valid because technically nicotine can only be sold legally at pharmacies.

But if nicotine is a controlled substance, why still got cigarettes? Well, because tobacco is an exception and it falls under a different law (heck Malaysia even has a whole lembaga tembakau). But that is on the health side la. There very well could be some other things that we don’t know. So now we traverse to where our writer UiHua would call the CILISOS Conspiracy Corner.

If you’ve read our previous article on vaping, we actually talk about possible conspiracy theories why the gomen would wanna ban vape.

Basically our gomen collects a decent amount of taxes from cigarette sales. If people start to move from cigarettes to vape, they lose money.

We found an article by Transparency International that commended MACC for arresting customs officers, including a State Director, for smuggling cigarettes and alcohol. So yes, there are possibly gomen people who stand to gain from illegal cigarette sales. Once again, you can read about these conspiracies in more detail here. But regardless of the reason, maybe us regular people should consider one last thing before we decide for ourselves whether vaping should go or stay.

Can we not be too hasty to get rid of something that MAY be good?

Yes, kids vaping is a problem, but at the same time, kids smoking is also a problem. But as the discussed earlier, the difference between them at the moment is one has laws that prevent them from being sold to kids, while the other doesn’t.

But is banning vape completely the only solution to the problem?

The UK gomen recently released a study that concluded that vape is at best 95% less harmful than cigarettes. While 95% less harmful still means it is harmful in some way, another thing that the research said is that it does have the potential to help smokers quit smoking. (But to be fair, that’s what they said about cigarettes when it first came out so if vape also can be avoided completely even better la right?)

Remember kids, smoking is not safe. Image from Cyanide and Happiness.

So while we do not in any way endorse kids taking up vaping, it does seem maybe a bit harsh to ban vaping completely to prevent kids from vaping. Because we definitely didn’t do that to cigarettes.

What could be the solution then? Well, we found both local and international (like this, this, this, this, and got others la go find yourself) that mention how vaping should be regulated.

“A de-facto ban on e-cigs has the perverse effect of protecting regular cigarettes from competition, he says in an e-mail interview. A ban also means that the government abrogates responsibility for ensuring safety and quality of e-cigs. Removing a ban provides opportunity for good regulation that offers Malaysia’s smokers a viable exit from smoking.” – Imperial College London Emeritus Professor Gerry Stimson, as quoted by The Star.

Even a poll down among our readers saw 45% percent of the respondents vote in favour of regulations instead of outright banning. So maybe that is a better solution la. Rather than just get rid of vape, we control it to keep it away from kids, yet accessible enough to help people from other age groups.

Well we don’t know if it’s the best way to quit smoking, but you get what we mean la.