[Update] Today is our Prime Minister’s birthday, ugaizzzz! Send him a birthday wish on his Twitter or Facebook!!!

HAPPY BIRTHDAY DATO’ SERI NAJIB RAZAK!!! FROM ALL OF US HERE AT CILISOS!!!

We don’t normally talk about politicians and their birthdays (like Tun Mahathir turned 90 a couple of weeks back and we didn’t say anything :P) but this is our Prime Minister yo!

Google and Wikipedia says so. Confirm correct! Click to go to his Wikipedia page.

But even if his birthday does not interest you….. So yea tweets. The Malay Mail Online reported that a Twitter survey showed that among Twitter users, 8 in 10 users discussing the recent WSJ allegations were very critical of him. Meaning 8 out of 10 of them tak puas hati with Najib.

And that made us wonder, what exactly were the people who supported him saying? Like how do you defend and support our PM when everything seems to work against him?

So we did this. We took to Twitter and started combing through tweet after tweet. And we did in fact find tweets that showed their support for Najib, with their reasons for doing so. So we’re taking these reasons and putting them here, while we also put down our rebuttal to their reasons.

Disclaimer: We do not intend to put down the writers of these tweets. In fact, we reckon it’s important to see points of view beyond our own, and understand how people think. Also, since it’s Najib’s birthday today, he could use a little pick-me-up article.  😉

So without further ado, here are some of the tweets supporting NAJIB in his time of need.

1. “This is all anasir luar punya hal la” Translation: These foreign bodies have no right whatsoever…we should defend, not so easily believe those who want to destroy our peace.

Translation: When groups are too passionate about bringing Najib down, now we can see just how desperate these groups are to be willing to work with foreign bodies.

This was definitely one of the main arguments. So the argument is that these allegations about Najib and 1MDB are not true because they are from anasir luar or foreign bodies.

Which anasir luar? Well, check out these next set of tweets. Translation: Fact. The clans of Mahathir are now allies with American Jews. They are willing to collaborate with the Jews of WSJ to bring down Najib.

Translation: WSJ being investigated is not for nothing, we cannot fully believe Jewish sources. WSJ’s reports about our country are just like their reports about Iraq back then. Probably wrong.

We understand that many Malaysians do not have a very good perception of Yahudi,probably cos of this guy 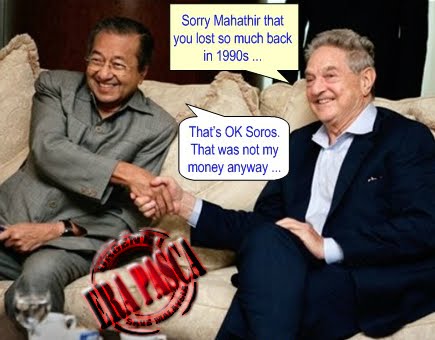 image of George Soros and Mahathir from jomkitabaca.wordpress.com

After all, Tun M once said that international fund managers, like Mr Soros, engaged in currency speculation were “unscrupulous profiteers” involved in an “unnecessary, unproductive and immoral” trade…. and was one of the main reasons he pegged our RM back in 1997.

And two of the WSJ DEPUTY EDITORS ARE JEW OMG.

But er… their editor, Paul Gigot is as far as we can tell… not. We even googled his Family Name to check.

Beyond that ugaiz, we also have to consider that while Sarawak Report may not be a very established news source, the WSJ is. in fact, they’ve even published arguable ANTI-JEW columns before. We recently wrote an article about the WSJ to examine their credibility. In it, we found it very difficult to see how a 126-year old publication would put their reputation on the line for the sake of bringing down our country. Especially when we don’t see how they can gain from it either. Except of course to wipe evil Malaysians off the face of the planet.

NAH, BACA:
Is ISIS a Threat to Malaysia? [UPDATED!]

2. “He is innocent until proven guilty!” Guy in green: I’ve heard stories that RM7000 has been transferred into your account. Could you show your account statements to prove that these stories aren’t true?

Guy in pink: The person telling these stories should be the ones showing proof la. Why must I be the one to show proof?

Guy in green: Err, can flowcharts like these be used as proof?

Yes, this would apply to a normal person charged and to be punished for a CRIME. The thing about Najib is, he’s no ordinary person. Aside from being our Prime Minister, Datuk Seri Najib Razak is also the Malaysian Minister of Finance. And most people aren’t asking for him to be arrested, but merely to step down from his role.

Even from a job-standpoint, taking the whole WSJ and 1MDB scandal out, the ringgit dropping like it’s hot, maybe he should should step down purely from doing an obviously crappy job?

From a did-something-wrong standpoint, an example that we can draw from is the Nixon Watergate scandal that took place in America during the 1970’s. In the events, leading up to his resignation as US President, he claimed to be innocent but eventually caved to political pressure and resigned two years into his 4 year-term.

3. “C’mon la, why would he transfer stolen money into his own account?” Najib did in fact say this. But the thing is… that’s not really what the WSJ alleged. They said money had been transferred into his account, and insinuated that it might have helped them in GE13. Neither of which can be said as a ‘personal reason’ e.g. like buying a jet (something he can do legitly using gomen money anyway).

But logically, can it even be used as a defence? As always, when CILISOS got law question, we go ask lawyer. According to Eric Paulsen (from Lawyers for Liberty) , logic cannot be used where evidence seems to point otherwise. He said that even if it was illogical for someone to commit a certain crime, it means nothing if evidence shows that the crime did happen.

“You cannot claim to be not that dumb to commit a crime.” – Eric Paulsen

4. “Our PM dares to sue them so berani kerana benar”

Well, on this point, both sides are kinda in agreement. Most people want him to sue. Check out this poll we did in our previous WSJ article.

UNFORTUNATELY, because his lawyers’ letter to the WSJ recently wasn’t to sue, but to clarify if WSJ was confident of their claims (click to read our version of Najib’s letter). There are some who even say that he sent this letter to create another beacon of hope for his supporters.

Oh, and after the letter, the publisher of WSJ was quick to reply that they are standing by their claims about 1MDB. Berani balik kerana benar?

Will this article convert them?

Probably not. BUT eventhough we may disagree with their point of view, but that just means that we should discuss them even more. Connect with them instead of alienating them.So if you meet one of em in a mamak or in a Facebook comment thread, at least now you understand them more, and might even have a chance of explaining things!

Oh P.S: And this is one of the reasons we’re looking for a BM editor for CILISOS too so please send your resumes in here.

If you didn’t agree tho, we’re sorry. Do let us know your counter-arguments in the comments below. To get things started, how about a sweeter comment about Najib instead?