The Johor royalty has been making headlines lately, but maybe the most prominent and controversial one was about making Johor leave Malaysia and form its own COUNTRY! “In fact, we only joined the Federation of Malaya, upon both parties agreeing to several basic terms. And if any one of those terms are breached, we have every right to secede from this country.” – Tunku Ismail, crown prince of Johor as reported in Fourth Official. 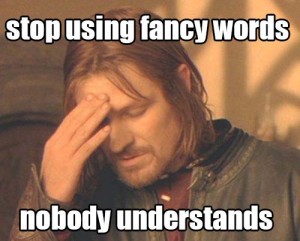 Don’t let the big word confuse you! Secession simply refers to a group (such as a state or region) “leaving and becoming independent”. Think of it as being in a Whatsapp group which you decide to voluntarily leave because you want to be your own admin and start a new group.

But of course, this is way more complicated than a Whatsapp group, since secession is political in nature and would involve much greater consequences than your friends being angry with you for leaving the chat. In fact, it’s so serious that we even wrote an article about it (YES. THE ONE YOU’RE READING RIGHT NOW!)

No, but seriously, it’s a really big deal because even demanding for secession in Malaysia could land you in hot soup! In the original draft of the new Sedition Act, this line was proposed to be included as an example of what is seditious:

“A excites a person or a group of persons to demand for the secession of State B from Malaysia. Such act is seditious.” – Amendments list, p.2, Section 3(a).

Though not explicitly mentioned, critics claimed that the proposed amendment was in reference to Sabah and Sarawak. Why Sabah and Sarawak? Well, Johor isn’t the first state to bring up the topic of secession cause our East Malaysian brothers and sisters have been talking about it for years! One such movement would be the very literally named…

… run by activist Doris Jones that campaigns for Sabah and Sarawak to, well, keluar Malaysia. Their FB Group has 38k likes (that’s 22k more than CILISOS).

Wah… everyone happy like going clubbing wei. Image from www.sabahsarawakmerdeka.com

It’s not just these groups too. East Malaysian politicians (including Bung Mokhtar, or as we affectionately call him, The Bung) claims that any state that joined Malaysia voluntarily has the right to comment on secession. In fact, Bornean MPs and activists made so much noise that this ‘example’ was finally removed from the final version of the law. So how exactly would Johor leave Malaysia?

It wasn’t a one-off from Tunku Ismail either. His brother, prince Tunku Idris raised the thorny issue of secession in an Instagram post stating that Johor has the right to leave Malaysia if any terms of agreement are breached. Throwback to the 40s! Screenshot from themalaymailonline.com

The least attractive Instagram image in history refers to an agreement made by the Johor government in 1946 that include:

Johor is in a unique position if they chose to secede because…. it is the ONLY state in Malaysia to have its own private army which is the Royal Johor Military Force (or Askar Timbalan Setia Johor in BM)! Though mostly ceremonial today, they do undergo training to protect the royal family. Ok, BUT… can Johor do it onotttt? Well… experts said that the Federal Constitution is silent on the topic of secession, and that constitutional amendments were not impossible.

But historian Prof Datuk Dr Ramlah Adam said the agreement made between Johor with the Federation of Tanah Melayu in 1946 are considered null and void (as with any agreements made before 31 August 1957) after Merdeka.

“These issues are over. The powers of the Malay royalty are now included in the Federal Constitution. However, the Federal government must respect the Johor state laws and should not intervene. The royalty still holds power,” – Dr Ramlah, as reported in Astro Awani.

So this would mean that it’s a no-go for Johor right? Wellllll….. not necessarily. Lawyers who have looked into this are kinda torn on the issue due to the case involving Singapore. Some of you might remember that Singapore was part of Malaysia until they left in 1965. Or rather, most of us would THINK that they left, but uh-oh plot twist:

Singapore left in 1965 not because they wanted to leave, but rather they were kicked out.. expelled.. kena tendang; just two years after the formation of our young nation. So here’s the difference: we forced singapore to leave (expulsion), but Johor (in the context of this article) wants to leave (secession). So if Singapore can be separated even after the formation of Malaysia, then it can be argued that the rules for separation aren’t set in stone. In other words, the current legal sentiment is that secession is not entirely impossible but lies in an uncomfortable gray area.

So instead of gray areas, lets look at some countries that have Succeeded in Seceding™…

Other countries that Succeeded in Seceding™ Aiyo. So much for avoiding grey areas. Image from washingtonpost.com

Well, the call for secession is not entirely uncommon, with the most recent being Scotland’s attempt to be independent from the United Kingdom in September 2014. Among the reasons for their secession is for the country to have its own armed forces and to make its own decisions on resources – like how money is invested. Unfortunately, it didn’t happen because they voted against it. 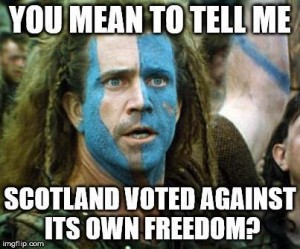 William Wallace rolling in his grave… Image from seen.co

Maybe it’s cos Mel Gibson’s descendants were relatively peaceful (no war, chaos or political violence). BUT many nations that have successfully seceded went through some form of violence in their pursuit of self-government – and sometimes after they Succeeded in Seceding™.

NAH, BACA:
TMJ owns a run-down istana in Singapore worth RM14billion, but he can't sell it.

Most of us would remember the shock of MH17, which was (allegedly) shot down in Ukraine after being (allegedly!) mistaken for Russian President Vladmir Putin’s plane. Well, the reason for all this is because of the ancient conflict between Ukraine and Russia. 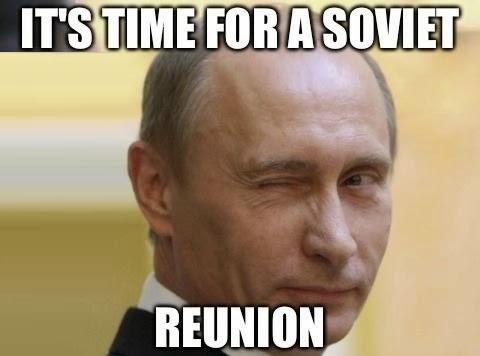 Putin’ it real. Image from beforeitsnews.com

Although part of Ukraine, a majority of people in the Crimean region speak Russian and identify themselves as ethnic Russians. With their shared history and common culture going back to centuries before, Crimea wanted to go back to Mother Russia’s boob (thus making it secession) leading to high tension between the Ukrainian government and the pro-secessionist militants in Crimea.

You can read up more on the crisis here, but the outcome is that Crimea did join Russia when over 95 percent of them voted (a vote that US and European Union consider illegitimate) to do so, after Russian forces intervened with military threat and took control over the region. The secession came at the cost of lives being lost, ongoing violence, and a crippled economy to the point that international mobile phones and credit cards don’t work because the companies have pulled out.

Unfortunately, the story hasn’t had a happy ending yet, since joining Russia wasn’t the bed of roses that the Crimeans thought it would be since support from the Russian government wasn’t close to what was promised.

And now for a place closer to home… East Timor, or Timor-Leste (which is about the same distance from Kota Kinabalu as KL). They got their independence relatively easy.. at first lah that is. After their Portuguese colonial masters left in 1975 (change in Portugese management), the poor East Timorese just started partying for 9 days then Indonesians came in to take over the country. During that time, 200,000 people reportedly died of famine, disease, and fighting in a time of brutal repression by militant forces until Indonesia also had a management change in 1999 that allowed the Timorese to vote for independence – and they won. This choice was in line with Indonesian president B.J. Habibie’s democratic political reforms that would not be possible under Suharto’s authoritative regime.

But again, not so happy ending. East Timor faced yet another ongoing challenge in the form of anti-independence militia groups! They resumed a campaign of violence and intimidation before the United Nations stepped in and assisted in peace-making efforts, and East Timor is finally on its own. Again. Although the country enjoys relative stability today, the Timorese experienced riots and conflicts in 2006 due to dissent within the army.

You think easy to start your own country ka?

The common ground we see here would be that it really isn’t easy to start your own country, so it’s something that should be considered VERY carefully. Calling for secession may trigger a chain of possible challenges. Both Crimea and East Timor experienced violence, political chaos, and international intervention in their road to independence.

Also, before a state can go all gung ho and call for secession, a government first needs to allow it to happen (usually cos of change of leadership in the originating country)! If all else fails, there’s always a third-party intervention measure like how Russia did it with Crimea. Even if the government allows it, starting a country would mean starting from scratch. We need to figure out what laws to implement, what public policies to endorse and etc. But if you’re clueless about it there’s always a Wikihow’s 12-step guide on how to start a country! But why is there talk of secession in the first place? Well.. it’s a known fact that a majority of the Malaysians are unhappy with the way things are going, even recent polls have shown that this is largely due to the gomen’s handling of the economy. So perhaps, rather than focusing our energy and efforts in leaving the country, maybe it would be better for us to shift the focus to fixing things internally.

“Secession threats are culminated in dissatisfactions of some sections of society. People who promote secession should be engaged in a civil and rational manner. … At the same time, the government must double the efforts to increase the sense of belonging of people from various races and religions towards the country. Malaysia is worth preserving but it also needs changing.” – Arnold Puyok, political analyst as quoted in Malaysiakini.