About a week ago, our dear Tun M. dropped a bombshell on us when he formally announced that he’s forming a new political party and the formation of a new ‘Pakatan’. The name of the new party hasn’t been confirmed yet, so we’re going to call it the Mahathir-Mukhriz-Muhyiddin Party, or M3P for the time being.

We know he doesn’t really support PM Jibby, but is he actually planning to re-take the PM post by himself?! Well, if and before that ever happens, we first need to know… Tun M. popped his party-forming cherry when he reformed the current-day UMNO under the name UMNO Baru back in 1988. Long story short, Mahathir and Tengku Razaleigh (Ku Li) had a face-off in 1987, which Mahathir won.

After Ku Li challenged the decision, the High Court found UMNO to be an illegal organization because some of its party branches were not registered properly, so Mahathir registered a new party under the name UMNO Baru. So it’s actually kind of weird that Mahathir is now forming a new party to go against the party that he formed back then.

And while he technically already won the government when he formed his first UMNO Baru party, we can’t help but wonder if it’s going to be the same case now…

Does this new party ACTUALLY stand a chance of winning?

Historically, parties that are set up by UMNO rebels tend to not do very well, like IMP and Semangat 46, so Mahathir already has a challenge on his hands to break that trend with this new party. Still, this doesn’t mean that he has no chance at all, as he still retains quite a bit of support from rural and semi-urban voters. Also, if there’s anyone who knows how to handle a political party, it’s gonna be Mahathir – he was our longest serving PM after all. Also, Mahathir took with him a couple of heavyweights from UMNO such as former DPM Muhyiddin Yassin, former Menteri Besar of Kedah, Mukhriz Mahathir, and former UMNO vice-president Shafie Apdal as well. That’s quite a lot of influence and political experience, which makes their new party quite legit.

Annnddddd, according to Mahathir, this new party won’t be running against the gomen alone, but be part of a new Opposition coalition! This is the biggest difference between M3P and all the previous failed ones, and could make him a real threat to Jibby after all. But wait…new opposition coalition?? Does this mean….

Mahathir is working with all his enemies?! 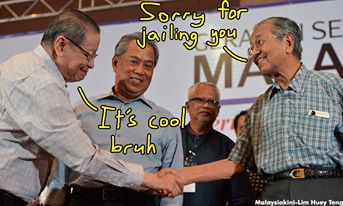 See, Mahathir’s plan is to form a whole new Opposition that includes M3P and the current Opposition parties, and for him to lead it as “first among equals”. Interestingly, Kit Siang and Anwar, who were sent to jail by Mahathir, are actually fine with the idea of working with him now! In fact, almost every leader of the Opposition have said that they would consider working with Mahathir’s party to form a new Opposition coalition!

This is actually quite a big deal for M3P, because it means that Mahathir isn’t fighting alone, but is backed-up by the already-quite-power-Opposition. If the recent by-election results are any indication, parties that go alone against BN normally get steamrolled into the jalan. That’s why Mahathir’s plan to form a new Opposition coalition is actually quite a smart move. He has a much higher chance of success than going alone, AND the Opposition isn’t caught in a three-way fight against BN like in the recent by-elections.

In fact, according to political analysts, M3P is actually going to strengthen the Opposition and increase their chances to take Putrajaya in the next GE!

OMG! So could we REALLY be seeing “Mahathir 2.0, The Return of the PM” in Malaysia soon? Could this happen? Image from themalaybusinesstribune.com

To be fair, Mahathir has said that he may not actually run as a candidate, so even if Pakatan wins the next GE, we may not see him as PM again. So….yay for BN then? Well, not exactly, because…

When Mahathir announced his plans for a new party, most UMNO leaders reacted like… DPM Zahid Hamidi reportedly said that UMNO “wasn’t worried” about Mahathir, while other UMNO figures questioned his ability to lead and said he won’t be a threat. UMNO Supreme Council member Nazri even went so far as to call him “rubbish” and wished him “good riddance”!

One reason could be because they think he’s doing this for personal reasons– to kick Najib out of office, and maybe install his son Mukhriz as future prime minister. To be fair, political analysts are saying the same thing, advising that the ‘new Pakatan’ present a common manifesto that goes beyond ‘We all hate Najib’ in order to win the hearts of Malaysians. Not a good enough reason to attract people. -Image from blogoptimizing.wordpress.com

However, others think that Mahathir’s M3P might be the middle-ground for UMNO/BN supporters who are unhappy with the government but unwilling to support the Opposition. This would make his party quite attractive to join, especially since UMNO is currently facing internal conflict of its own. And with recent reports of some members of UMNO considering jumping ship to the Opposition because of the US investigation, it’s an opportunity for M3P to take advantage and curi more members from UMNO. The fact that Mahathir sorta knows how BN thinks and operates can also make him a threat to them if he joins up with the Opposition, a point raised by Ambiga.

It’s also quite interesting how his new party is being supported by Opposition leaders, especially since many people blame him for our current political mess in the first place. It is worth remembering that many of them who are supporting Tun M. were previously jailed by him, so they should be the one who hates him the most. But the fact that they are willing to put it all behind them and work with him to help achieve a hopefully better Malaysia can maybe teach us a valuable lesson, that sometimes it’s not about how we feel, but about what’s best for the country.

So it might seem that BN might be ignoring Tun M. at their own risk, and mayyybe they should be giving him a bit more credit than they have so far.

So Malaysians, what do you think? Yay or nay for Mahathir’s new party?