If you’ve been seeing a lot of news headlines about Parliament, MPs, or Dewan Rakyat – it’s because this is the last parliamentary session for 2019. Parliament sessions happen three times a year, and it’s usually a time where every news portal would have reporters camping on Parliament grounds eagerly awaiting to report the latest updates coming out of Dewan Rakyat.

This is because the Malaysian Parliament is where laws are made or changed, and hard-hitting discussions are carried out – all to create a grater Malaysia. Geddit? Because the building looks like a giant cheese grater? Image from IKIM

Btw, we’re using the terms “Parliament” and “Dewan Rakyat” interchangeably but there’s actually a small technical difference between the two terms, which you can read about here.

So anyway, here you are reading the news and trying to keep up to date with the political goings-on so that you can impress your friends at the mamak at how politically aware you are…. and then you see this headline: I got into a quorum with my wife, but I ended up apologizing. Original screencap from The Star Online

What on earth is a “Quorum”? For that matter, does a “Party Whip” mean that 50 Shades of Grey isn’t only referring to our MPs’ fashion choices?

Before you start on the fan fiction between your favorite politicians, here’s 5 of the most common terms we found being used in newspapers – explained.

According to Cambridge Dictionary, a quorum is “the smallest number of people needed to be present at a meeting before it can officially begin and before official decisions can be taken”. Kind of like how teachers used to take attendance with us before class can start.

Here are the step-by-step guide of how quorum operates in Dewan Rakyat:

The reason for the headline you saw in the introduction is because, in this current Parliament sitting alone, there have been two instances where Dewan Rakyat proceedings had to be halted due to lack of quorum, on the 17th of October and 20th of November respectively.

As you might guess, MPs not showing up is a pretty big deal as it can stall the Parliamentary process (not to mention it’s bad PR). Dr. M has recently suggested that Pakatan Harapan MPs’ attendance in the Dewan Rakyat could be a factor in whether or not they’ll still maintain their position in the next Cabinet Reshuffle.

Take a look at these names:

You’d think that, in the current government, they’ll be holding some prominent positions or be like a “lead MP” or something.

But you’d be wrong.

Yes, they are all pretty big names in the Malaysian political arena as every word they say or write are met hungry eyes and eager ears. However, when they are in Dewan Rakyat, alongside ministers and MPs in the opposition opposition’s shadow ministry, they are known as backbenchers.

And yes, backbencher is exactly what it sounds like – they sit in the back. It’s literally what it means. Who would’ve thunk? Unedited image by Carlosbraga on Pinterest

More specifically, a backbencher can be:

While it may seem that backbenchers have comparatively less power to influence the policymaking process, they still represent their constituents and will bring up the issues and concerns of the people. And, as evidenced, some backbenchers are prominent enough to have their voices carry significant weight…… they just may need to speak up a little louder from the back. The morning session for each Dewan Rakyat meeting – 10a.m. to 1p.m. – is allotted for question time. If you’re thinking of those times in primary school where the teacher grills you on the multiplication table, that’s exactly what it is! ….kinda.

Parliament Question Time (QT) is a fixed period where any MP can ask any minister questions regarding government policies and bills in discussion, and the minister MUST answer them. This is to (allegedly) ensure that ministers are held responsible, accountable, and transparent on their policies and decisions. Needless to say, this is also where most of the drama happens, with MPs and ministers  veering off topic, coming to shouting matches and calling each other names.

Here’s how it goes:

However, in this current parliament sitting, a new Question Time was introduced – specifically for the Prime Minister – as part of Pakatan Harapan’s election promises. So if you see PMQT in the headlines, you’ll know what it means. Not that whipping. Image from Trillium Party

Yep, you read that right – we’re talking about party whips.

Okay now that you guys have stopped laughing, according to the Cambridge Dictionary, the whip is “a member of a political party in Parliament whose job is to make certain that other party members are present and that they vote in a particular way“.

…to ensure that MPs in their party behaved as a single horde and not run off in their own directions trying to be independent or “vote according to their conscience” – M. Veera Pandiyan in The Star

Currently, the known chief whips of each major party are: 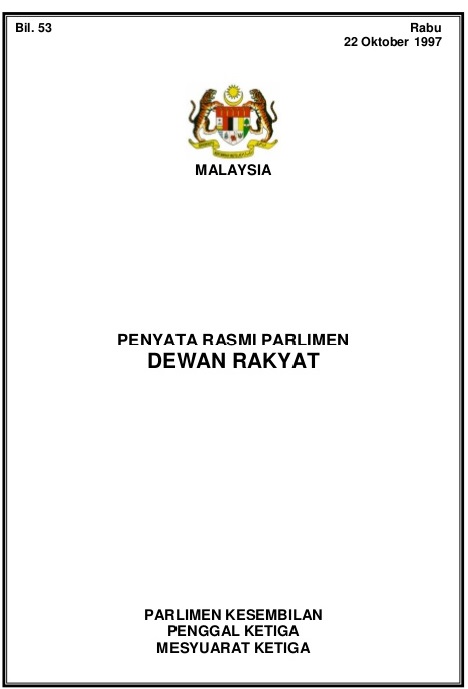 This one very simple la okay. You know how if you go important meetings, normally got a secretary or intern to take notes for minutes of meeting? The Parliamentary hansard is basically that lor – a fancy name for transcripts of the debates that happen in the Dewan Rakyat. The dictionary this time defines a hansard as “the official published report of debates in the Parliament“.

It’s essentially a verbatim record of what was said in a Dewan Rakyat meeting, be it question time or debate, incorporating questions and answers on the official Parliament website. The hansard reports serve as the most concrete evidence for all things said, debated, and argued in any Parliamentary meeting. With a hansard, no one can deny anything they have ever said in a Dewan Rakyat meeting, because one can easily whip out the hansard of the day and show them the receipts.

Parliamentary hansards can be found on the official website, where each document details the proceedings of each day, edited by the heroes who are hansard editors. But they won’t tokok tambah anything they like la; they only correct mistakes and omit repetitions in the report to provide clarity and avoid confusion and ambiguity.

To be fair, the above five terms are not the only concepts that help the functionality of Parliament sittings and Dewan Rakyat meetings, but they are some of the most important elements that push things along in the building. If you wanna learn more about these super technical terms to wow your friends while having supper at the mamak, you can always look up even more of them.

Or… you could just invite yourself to sit in at Dewan Rakyat meeting, since the current Parliament sitting will continue until 5th of December. Yes, you can do that, and we even wrote an article on the experience, along with five other things that you probably didn’t know about the Malaysian Parliament. For example, did you know that there is a deer park at the Parliament building?

You will probably be able to learn more than we can even tell you if you’re there for a firsthand experience. Who knows? Maybe it’ll be your lucky day and you can witness some MPs or ministers have it out right in the middle of the house.