There should be little disagreement if we were to call the Malaysian Parliament building an iconic landmark – most Malaysians would readily recognize it as a symbol of the government and democracy, a place where laws are discussed and decided, a place where the Rakyat’s voice is heard, a place that……..sounds really really boring.

Because really, the only reason anyone would go to the Malaysian Parliament is if they: 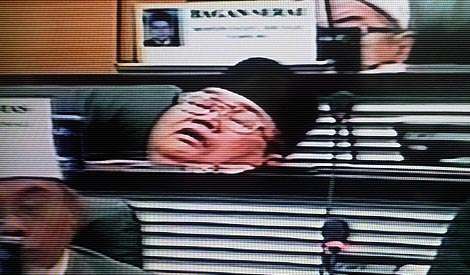 So much to our surprise, after hanging out with DAP parliamentary researchers Nud and Yi Fan we found out that we were wrong all this time. The Malaysian Parliament is actually pretty awesome. Best part? You don’t even need to be interested in politics because…

So let’s say you’re completely not interested in politics, but your partner is. Even worse, your partner decides to take you on a special date to the Malaysian parliament! #FML

Well, don’t worry because parliament has something for everyone! While your partner is watching the Dewan Rakyat proceedings and going “Oh dear” you can head out to the parking lot and go “Oh, deer!”

Yep, if you walk along the parking area, you’d eventually come across this sign ↓ And if you walk to the fences right behind it, you’ll find lotsa lotsa deer! ↓ You probably won’t be able to enter the compound, but you can sit under nearby tree and chill with them while your partner is listening to MPs talk about legislation or whatever. Yes, we know a kancil is a mouse deer. Original image from Flickr Blog.

We don’t know exactly why there’s a deer park in parliament,

[UPDATE] A reader who’s worked with a veteran MP for more than 20 years clarified:

“The deer are the great-great-great-grandchildren of the original two brought over as gift to the Malaysian parliament by a Chinese Parliament Speaker when he visited Malaysia during the last century.”

2. The parliament tower is an iconic symbol of Malaysian democracy, but actually…

Whenever we talk about symbolic images of democracy, the first thing many of us might think of is the tall parliament building, which we see stamped onto the back of our coins. After all, it’s home to the Dewan Rakyat and Dewan Negara – where laws and issues are discussed and passed – but here’s a question:

On which floor of the parliament tower do you think the Dewan Rakyat and Dewan Negara are located? Well, if you answered A…. you’re wrong

If you answered B…. also wrong.

In fact, all the options are wrong because that tower isn’t actually the main building – it’s just the office tower block for maintenance crew, security, and other government officials.

The actual “main building” where the Dewans are located is a 3-story block that’s connected to it. Note that this is an old photo. Image from Allnumis.

So yea… the tent-looking thing you see next to the tower on our coins? That’s where all the action is. Yet more proof that length isn’t everything. Every political party that has MPs serving in Parliament gets an office within the building. The Opposition parties are located on the 13th and 14th floor, which is a bit of an inside joke among Opposition MPs because these are generally considered to be unlucky numbers. DAP has their office on the 13th floor, while PKR gets a special office as Leader of the Opposition. The highlight here though, is PAS; who occupies the 14th floor.

If you remember, PAS went through a pretty bitter split last year with its more liberal members (some of whom are MPs), leaving the party and forming a new one called Parti Amanah Negara. How bitter, you ask? Like publicly call the other side traitors and vow never to work with them again kinda bitter.

So of course Amanah ended up sharing the same office space with PAS. It makes sense, right? Everyone in there is already familiar with each other, just under different banners now. It’s kinda like divorcing your wife but still sharing the same studio apartment. Totally not awkward at all! Unfortunately, we didn’t get a chance to see how that arrangement turned out, but we won’t be surprised if there was a line or foldable screen splitting the office right down the middle. lel.

NAH, BACA:
Malaysia's only the second country to remove its parliament's speaker - Who's the first?

Oh, and another interesting bit of trivia – Although Parti Sosialis Malaysia (PSM) has one MP, they’re the only party without an office in parliament. This happened because PSM candidates tumpang-ed with PKR during the previous election, so PSM’s MP is considered to be “part of” PKR. Thanks for the tip Sze Ming!

4. There’s a guy in the Dewan Rakyat with the most interesting job in the world During our visit, Nud managed to bring us into the viewing area of the Dewan Rakyat, where we got to watch first-hand how the proceedings went. Other than admiring the touch-screen monitors in front of each MP, we also noticed that every once in awhile the guy circled in the picture above would get up from his seat to take the scepter-looking thing off its holder. Then, after a few moments, he would place it back. Well, that scepter-looking thing is called the Cokmar, or the Royal Mace. It’s kinda like a symbol of the Agong’s Constitutional power as well as the power of the respective Dewans – there’s one in the Senate (Dewan Negara) as well.

The guy circled there is the Bentara, or Sergeant-at-Arms in English. His job is to take care of the Cokmar and to kick out unruly MPs. He also carries the Cokmar in and out of the Dewan.

Nud explains that the Cokmar is placed lower as a symbolic gesture to indicate when the Dewan goes into “jawatankuasa” mode – which is when amendments to Bills are read, or when MPs start voting on them. Also, it’s not really specific to the Malaysian Parliament… most national institutes like state governments and universities have one as well.

5. The Parliament’s design is different from all other gomen buildings

If you’ve ever been to some of our newer federal administration buildings, you’d notice that most of them are really… well… cantik. For instance, take a look at the Prime Minister’s Office building: Image from Out of Town Blog

Or the Palace of Justice, where our highest court is located: And then there’s the Parliament building, which looks like a giant cheese grater.

“The [parliament] building is also very distinct from other national buildings of importance built post 1980s as it does not incorporate any ethnic or religious motifs.” – Nud & Yi Fan

Yeah, so perhaps it’s not going to win any prizes for architecture, but here’s the thing – the Parliament building was designed to look bleh…. on purpose!

In fact, even when the building was completed in 1962, it was noted for two things: Being the tallest building in the KL skyline, and for looking bland. According to Yi Fan, Tunku Abdul Rahman (who had a huge say behind the design) responded to questions about the bland-ness by saying that the building was meant to be an “office” for MPs to work so the focus was on practicality, not beauty. In fact, the cheese-grater thing is actually part of the “tropical architecture” movement to limit the strong sunlight and heat blasting into the building.

We couldn’t find an online record of Tunku’s comment, but you can read more about the history and inspiration behind it here and here.

Actually…Everyone CAN (and should) visit Parliament! We figured that rather than ending this on a political note, it would be more fitting to instead use this space for some quick travel tips (and additional trivia):

How to get in

It won’t be as easy as visiting the nearby Lake Gardens, but it’s really not that hard to get in. All you need to do is to write a letter to their corporate communications department and, upon approval, make sure you follow the dress codes. Click here for all of the info.

Don’t get too stressed out by the security there either… they’re actually quite courteous and helpful. During my first noob visit, I parked my car along the bridge since I wasn’t sure if I could park inside. As I walked to the checkpoint, the guard said “Eh, park saja di dalam, tak payahlah jalan jauh-jauh.” Overall 10/10 would recommend.

You might wanna time your visit during the Dewan Rakyat or Dewan Negara sittings so you can watch your favorite politicians in action. Here are the schedules |Dewan Rakyat| Dewan Negara| No photos allowed though.

Things are a little messy on the parliament grounds right now due to some renovation work (scheduled to be completed in 2017) but it won’t affect your visiting experience too much. In fact, you can take advantage of this by parking your car at Bukit Aman and using the shuttle bus service. This is a temporary measure because the construction work created a shortage of parking spaces, but for visitors it’s an excuse to visit Bukit Aman as well. WIN!

So… will you be planning a visit to parliament any time soon? If you have, what was your experience like? Let us know in the comments!