If you’re reading this, chances are, you live in a metropolitan area (think KL, Selangor or Penang), and you got your vaccinations done at a nice PPV like the ones at PWTC or Axiata Arena. We’re pretty sure that at least some of you expected utter chaos when you were going for your first jab and it probably turned out to be the complete opposite – well-organized, quick and efficient. *Chef’s kiss*

You might be expecting the same for everywhere else in Malaysia too. This is, unfortunately, not the case.

Yeah, that doesn’t look like something that should be happening anywhere, let alone in front of a PPV. So… what’s really going on?

That looks more like a queue to get into a concert hall. Pre-COVID.

The title kinda spoiled the story a bit, but yes; the PPV shown in the picture in the intro was one of several in Semporna, Sabah. Things haven’t always been like this; John (we’re using a pseudonym here to protect their identity), a Semporna local, told us what he’s heard:

This feverish display [arose] from the fact that Semporna plans to enforce restrictions for the unvaccinated to enter premises or hold a job. Fearmongering happens with some saying that unvaccinated people might be apprehended. – John Apparently, things got worse in a hurry after walk-in vaccinations were announced. Can’t really fault any of the vaccinees’ thought processes – many of them are reportedly stateless peeps or immigrants without any documentation.

In their minds, the choices were either getting vaccinated or risk facing social sanctions. There were also rumors within that community that vaccination cards were a new kind of documentation they couldn’t do without, so it’s no surprise they came out in droves to get cucuk’d.

Be that as it may…

Maybe they were too nice. Img by Tenor

From what we’ve heard, it wasn’t for lack of trying on the part of the officials:

Yes, there are officials on-site and they do try to enforce SOPs but by the looks of it, they are outnumbered and whatever they say gets ignored by the herd mentality going on. Some stricter law enforcers try to break up the groups of people lining up by threatening arrest.

Basically, at times, undocumented people are disallowed from queuing since the jabs are for the documented anyway. Nevertheless, they still do line up with the hopes of getting the jab anyway. – John

Trying to handle an unruly crowd of hundreds with a handful of dudes is kinda like trying to hold back the rising ocean tide. More tents were added to the exterior area of the PPV just a few days ago, but according to Siti (yes, this is also a pseudonym), another Sempornan local who got her jab at said PPV, the crowd was so massive that people were spilling outta the tents. It was so bad that Siti couldn’t find where the queue started at first.

There were few police and RELA officers trying to control the crowd but didn’t seems to make any difference… Authorities tried to enforce proper mask wearing, but obviously in the sea of people, many just pull it down to their nose or their chin when the officers weren’t looking. – Siti

Man, if the outside of the PPV looked like this, the inside has gotta be lookin’ much worse, except…

Siti might’ve gotten COVID while waiting for her jab Once she got past the madness that was the exterior of the PPV, Siti found the interior to be… jarringly normal.

But once inside the Dewan itself, it was proper. People were lined into stations and there was proper mask wearing and social distancing. But before getting inside, they’re mushed into the crowds outside… – Siti

When you get COVID in a vaccination queue. Img by Tenor

She got her first dose, now she just has to wait for her second one, everything’s hunky dory, right? Wrong. Three days after getting jabbed, Siti lost her sense of smell and taste. You might recognize that as one of the major symptoms of COVID-19, and she thinks she got it from the PPV queue (which is ironic, but understandable).

Did I get it from the crowd outside the PPV? I’m not sure either. But it sure seemed like the people outside the PPV weren’t following SOPs meant to reduce COVID transmission. If anything, it just became a COVID hotspot.

As of the time of writing, this overcrowding is still a thing, and…

This isn’t just a Semporna (or even Sabah) problem 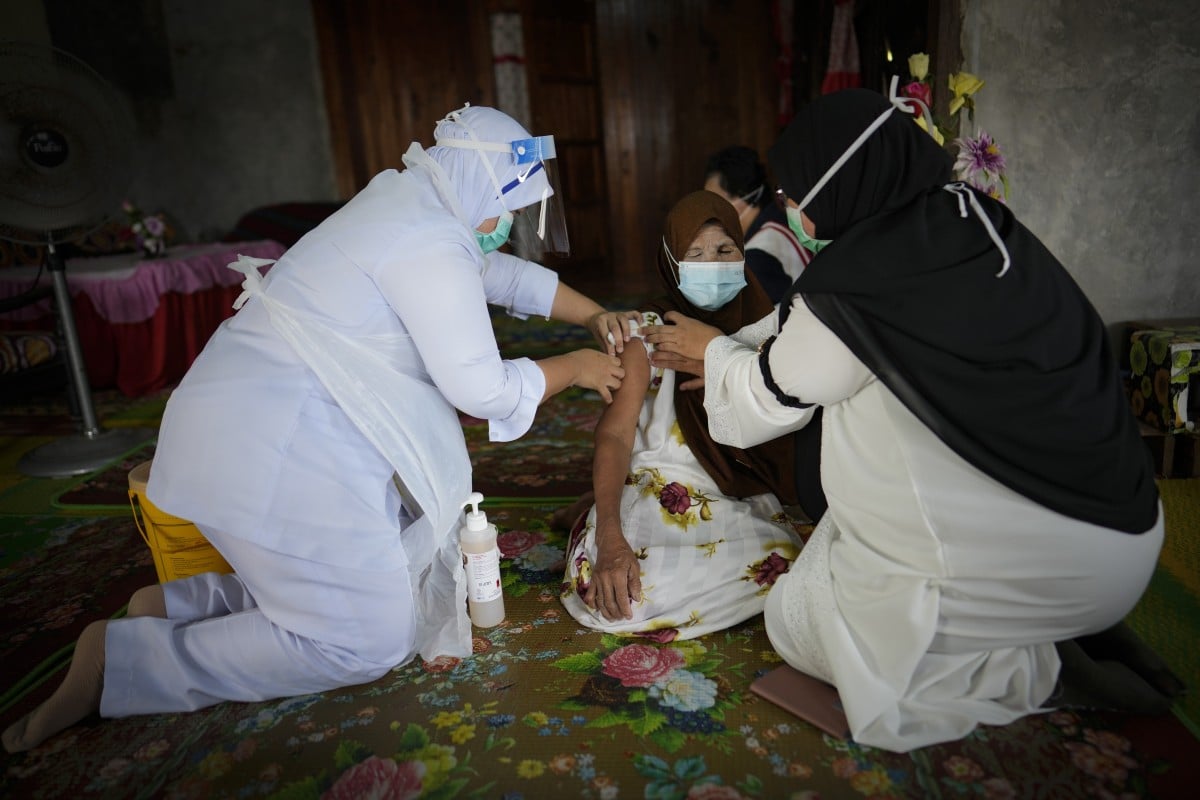 Door-to-door vaccinations had to be done for the folks who needed them. Img by South China Morning Post

What happened at this one PPV in Semporna is a perfect storm of iffy circumstances – the number of stateless residents and undocumented migrants, the lack of infrastructure and manpower, the lackadaisical attitude towards the virus – but Semporna’s not the only place in Malaysia facing vaccination woes. For some residents in other rural areas, the issue really is as simple as a half-hour trek to the nearest PPV… that they can’t make for one reason or another.

Still, things might not be as bleak as they seem. Our gomen’s not just sitting back in their metaphorical beach chair sipping on a metaphorical cocktail; they’ve been taking steps to help out our fellow Malaysians in the countryside:

And with the current adult vaccination rates in Malaysia being over 80%, achieving herd immunity seems like a foregone conclusion. Also, pleeeease don’t take Siti’s story as an excuse to not get vaccinated since in a lot of places, things are under control.

Share this article:
NAH, BACA:
A MySejahtera problem left me unable to CucukMyAZ. Here's how I solved it