Ed’s note: this article was originally published 30th August 2015. This was supposed to take place in Sept 2015, but a grace period was given till June 1st 2016.

This article is literally about trash, cause didja know that Malaysian households have to start separating their trash by September this year? Well, we do now!

Considering that September is less than a week away, it’s a pretty bad time to “suddenly” find out about it – especially if you’re not already in the habit of recycling.

So how do you even start?? How many trash cans will you need? Will you need different-colored plastic bags? Why is the govenment menyusahkan rakyat with this nonsense?

These were the questions that immediately came to our minds when we read the news, so we figure that all you house-owning people are asking the same questions as well. To clear the air, we got in touch with the Solid Waste and Public Cleansing Management Corporation (SWCorp), the government agency in charge of ensuring that all this goes according to plan, for answers.

Note, if you’re reading this in 2016, we’ve updated certain parts with new info

Here’s what they told us…

1. Only households in 8 states are required to separate their trash

Last November, the Ministry of Urban Wellbeing, Housing, and Local Government announced that households in 8 states that have signed the Solid Waste and Public Cleansing Management Act will have to start separating their trash into recyclables and non-recyclables. Which 8 states? We’re glad you asked:

If you’re in any of the other 7 states and one Federal Territory (We’re looking at you, Labuan) that ISN’T on the list, don’t breathe that sigh of relief just yet as we’re pretty sure IF this scheme works out, it’ll be slowly adopted into a nationwide program. Slowly, but surely. BTW, this is the NSA (yes the spy guys)’s 2015 Earth Day mascot. Click to read more about him.

That being said, let’s move on to the burning question*: “HOW?”

Image from the Ministry of Wellbeing , Housing, and Local Government.

What you HAVE to do is to separate your trash into two major categories, which are:

Unlike some countries like Germany, you won’t be required to have a specific-colored trash bag for each type of waste. SWCorp tells us (and recently confirmed on Facebook) that for now, the trash only has to be separated according to the categories and groups mentioned above. However, there IS a specific way for you to prepare your trash for collection. Here’s how it’ll work: That being said though, there’s actually a colored-bag system in place – it’s just not mandatory. So if you want to go the extra mile to help out the trash collectors (and the environment!), you can color-code the your recyclable trash like this:

You can check the full list here under the “Types of waste” category.

If you can’t or don’t want to get different colored bags, you can just write the types of materials down on each bag using a marker 😀  #lifehack

Oh, and if you’re concerned about how unsightly your kitchen would look with so many trash cans, don’t worry! There are loads of ideas floating around on the interwebs ranging from the classy-fitted-hidden look to the no-frills DIY. Pintrest is your best friend in this regard  😉 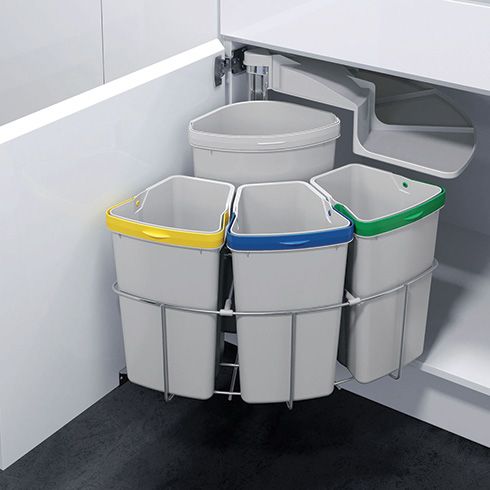 3. If you don’t follow the guidelines, you’ll kena saman RM1k If you think that this rule is too authoritarian and decide to be a rubbish rebel by not separating your trash, do note that there will be consequences.

SWCorp tells us that households who don’t follow the trash separation guidelines will eventually be fined up to RM1,000 and face possible court action if they still leave their trash unseparated after the fine. We say “eventually” because they’ll be adopting a soft approach during the first few months, educating households on how to separate their trash and cultivating awareness on the importance of these practices.

“The purpose of these compounds is not to punish but it is for advocacy. We can only become a civilised society when we can manage our rubbish properly.” – Abdul Rahman Dahlan, Minister of Urban Wellbeing, as quoted by Free Malaysia Today

They’re so serious about this trash separation thing that SWCorp officers were sent to look through people’s trash to make sure they’re doing it, and answering questions along the way. NAH, BACA:
5 Groundbreaking laws made in 2016 that will make Malaysia great again!™

4. Guidelines are a lil’ different for those living in high-rise buildings If you already live in an apartment or condo, you’d either be throwing your trash in a designated rubbish collection room on your floor, or (usually for low-rise apartments) in the collection bins on the ground floor. The separation guidelines are the same in terms of how you’d categorize the trash and the collection schedules, but there are slight differences in how you’d prepare the trash for collection.

SWCorp says that for high-rise units with designated rubbish collection rooms (Bilik Sampah) on each floor, residents will have to place dry waste (recyclable materials) by the SIDE of the bin while wet waste goes into the bin itself.

For units with a communal trash collection area (Rumah Sampah), individual collection bins will be provided at the Rumah Sampah for residents to place their trash accordingly.

I’m so confused. What if the item has both paper AND plastic?

This recycling thing is totally new for many of us, so we’re sure there’ll be a lotta confusion and questions. For instance, if you throw away a plastic container of food, it should be in the non-recyclable waste unless you get rid of the food and clean it first.

Anyhow, if you have any questions you can send a message or post on SWCorp’s Facebook page or call their hotline at 1-800-88-7472

So that’s it for the rulings and guidelines and all that official stuff. Now, let’s move to something a little less official, like:

“Why do we even need to separate our trash?”

The quick answer to this question lies in the first line of the Captain Planet theme song:

“Our world is in peril”

Serious. Based on a 2012 government study, the average Malaysian creates 800 grams of sampah a day – which doesn’t sound like much till you realize that it equates to 22,000 tonnes for the entire nation! That’s the combined weight of 15,000 Proton Exoras thrown away every single day! ← We originally said 15, but was corrected by Gabriel Leong. Thanks man!

While Malaysians (89% of ugaiz) are aware of recycling practices, only 10.5% are actively recycling. Worse, most of us are needlessly generating trash by bad habits such as asking for plastic bags for small or single items that we can easily carry by hand or in our pockets. It doesn’t sound like a big deal, but as the saying goes… “Sikit-sikit lama-lama menjadi bukit.”

In this case, a bukit of sampah!

A landfill in Penang. Image from Free Malaysia Today.

Our trash problem is getting so out of hand that landfills are reaching capacity faster than originally projected. For example, the Jeram landfill which services Selangor and KL was supposed to last till 2023 but is now expected to hit capacity this year. And the solution isn’t as simple as “Aiya, just open another landfill la!” because, aside from the costs, space and location is an issue so more of our forests will have to be sacrificed for a new one. After all, you can’t exactly have a mound of sampah right outside KLCC can you? And if you tie in the toxic leakage from the landfills into the soil, air, and our rivers, well… think about this the next time you ask for a plastic bag to hold ONE Snickers bar.

At the end of the day, it’s YOUR responsibility

The whole time we were writing this, a little devil voice whispered in our ears “This will not work, this will not work…” not because of the authorities, but because of the average Malaysian mindset. Call us judgmental, but we’ve seen our fair share of people throwing rubbish out of cars or simply just anywhere to not be entirely optimistic about the success rate of this ruling.

The first thing that came to mind is the fact that if we want to avoid not having our rubbish collected or getting fined, it’s always easy to, oh…. just dump it somewhere that’s not our property. Even better if got “Jangan buang sampah” sign, cause we’re all rebels at heart. So while mandatory rules and the threat of fines may get Malaysians to play along, we have to depend on awareness and change of mindsets to ease up on our trash problem, especially with loose trash that many people have no trouble just throwing on the sidewalk.We recommend our previous article on some super easy ways you can start being more environmentally-friendly, rated by level of mafan-ness, so you can only pick the ones you’re comfortable with. And yes, we do walk the talk  🙂 Separation bins at the CILISOS office.

So for ugaiz who live in the areas where it’s mandatory for you to separate your trash, we hope this article helped. For those of you who haven’t, try starting it regardless because as a great Captain once said… For you young ‘uns who don’t know Captain Planet, click this image to watch an episode on YouTube