Some of us may have thought about the different ways we would die one day. Maybe we’ve thought of living to a ripe young age and dying in our sleep. Maybe through either heart attack, diabetes or a stroke. Maybe in a car accident. But not many entertained the possibility of being suddenly killed by falling trash steps away from your home… unless you live in a PPR flat.

In a tragic turn of events, a 15-year-old boy died after he was hit by a falling office chair, carelessly thrown from the upper floors of the Seri Pantai’s People Housing Project (PPR) on Monday night. The boy, whose name was S. Sathiwaran, was walking home with his mother when the office chair fell down and smashed his head open, killing him instantly.

His mother, 46-year-old M S Kasthuribai, is still traumatized after seeing her son die in such a horrific way in front of her, saying that she cannot sleep as the event kept playing in her head.

“I waited for him at the block near the shop. I saw him walking towards me. As he approached me, out of nowhere, a chair hurtled down and struck him… I cradled him. I shook his body, but he was dead. I screamed for help.” – M S Kasthuribai, to the New Straits Times.

Sathiwaran had been buried on Wednesday, but his death highlighted a disturbing reality of life in the PPR flats… Trapped rubbish on the awnings of PPR Seri Selangor. Img from The Star/Samuel Ong.

For those of you not familiar with the term, PPR stands for Projek Perumahan Rakyat, a government initiative to rehouse squatters (those living in setinggan areas) and provide housing for people with a low household income, below RM3,000 a month. They are either sold at somewhere between RM30k to RM35k (RM45k in East Malaysia) or are rented out at the low price of RM124 a month. In big cities, they usually come in the form of flats which can be between 5 to 21 floors high.

Perhaps it is due to these conditions that life in the PPR flats have been described as “squalid, crime-ridden and in desrepair“. The conditions are so bad, it made Ku Nan cry.

“Every time I go to a PPR area, I cry. I cry and shake my head. I cannot take it when I see people of various races living under such conditions. I cannot take it, maybe you can,” – Ku Nan (Tengku Adnan Mansor), as reported by FMT.

According to recent interviews with the residents of the Seri Pantai PPR, it’s not unusual for trash to be thrown from the balconies, and these trash range from pieces of wood, bricks, regular trash and even plastic bags filled with feces. P. Vasanthi, a housewife, had been injured a few years ago when parts of a wooden furniture was thrown from the upper floors and grazed her back. However, she admitted that not all low-cost flats are like this.

“You cannot anticipate when things will start flying. It can be a liquor bottle, bricks, rubbish and all sorts of things.” – P. Vasanthi, for the Malaysian Insight. Yusliza Mohammad, resident of Seri Pantai since 2012, attributed the phenomenon to the laziness of some residents to go downstairs to throw their rubbish, and throwing them from the balconies is an easy alternative for them.

“Enforcement is lacking and now a death has occurred. The other day, people were throwing bricks and they damaged some cars. That’s considered a normal day. But now a boy is dead. I want to say that this will make people stop throwing stuff, but I don’t know,” – Yusliza Mohammad, for the Malaysian Insight.

In 2016, a 12-year-old boy sustained serious head injuries after he was hit by a metal rod thrown from the upper floors of PPR Semarak. His head had been scarred ever since. While PPR residents being injured from small pieces of trash is a common thing, Sathiwaran had been the first to die from this negligent behavior. 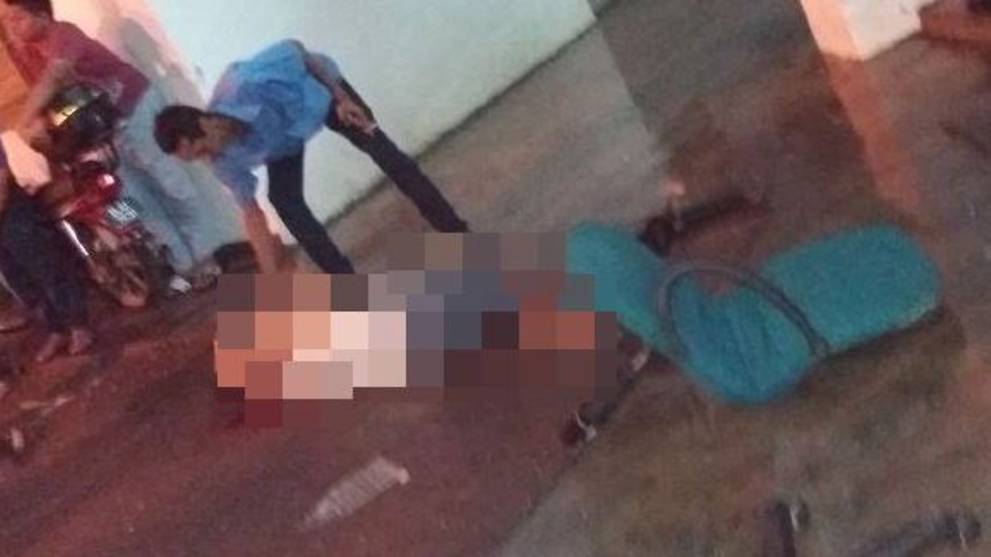 The chair at the scene. Img from ChannelNewsAsia.

So can death be prevented as long as people refrain from throwing huge furniture down a building? Well, the previous residents may be considered lucky they only get minor injuries from the falling trash, as…

Gravity can make even small falling objects deadly as well

Have you heard of a myth that says if you were to drop a coin from a skyscraper, it can kill the person below? Under certain conditions, the myth can come true. According to Dylan Roberts, the director of health and safety for a UK firm, a screwdriver falling from the fourth floor of a building will hit the ground (or anyone standing below) with the same impact force as a washing machine.

Here is what happened to a car after water balloons have been dropped from it from some height. This happened at a condominium area where a writer’s friend lived, where a boy had been throwing water balloons for fun down to the parking area below. The boy had since been reprimanded, and his father paid for the damages.

Okay, so water balloons are kinda heavy, and the body of cars are made to dent easily, but it does seem like a disproportionate amount of damage. Also, if someone were to throw a screwdriver at you, it might hurt, but surely one falling on you won’t feel like being hit by a washing machine, right?

Actually, it’s possible due to gravity. We’re keeping it simple, but you can check out this handy guide if you want to know more. This is a simple formula to see how much force can a falling object carry, which isn’t terribly accurate, but will be enough to give a rough idea on the situation.

If you wanted to know how that formula came about, you can message the writer and he’ll tell you. Also, yes, we’re aware that a lot of the terms we’ll using may not be up to scientific standards. They’re on purpose, to improve readability. We also left out calculations for terminal velocity… because it’s such a bother to write and read. Anyway, you only need the mass (weight) of the trash in kgs; acceleration due to gravity, which is 9.8 ms-2 on Earth, and the height from which the trash falls, in meters.

For reference, the human skull will crack at either 2,300 or 73 Newtons, depending on how lucky you are, so we’ll just say 200 Newtons, or about 20 kilograms of force just to make it easier. So, if you live on the tenth floor of a building, what’s the weight of trash that may crack somebody’s head?

We already have the Ke, which we put as the amount of force to crack someone’s head (200 N). For height, we assume that a floor is about 3.5 meters high, so ten floors would be 35 meters. g is 9.8 ms-2. Substituting those values in the equation will tell us that… 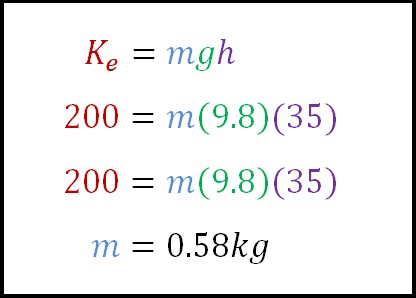 …you can potentially kill somebody just by throwing half a kilo of trash out your window if you live on the tenth floor, which is about the same weight as a 500ml bottle of water. And that’s to get an average person’s skull to crack. Less force is needed to injure people in other parts of the body, especially for young children and senior citizens.

However, perhaps the most dangerous litter is the lightest: cigarette butts. While they may not pack a punch, they pose a significant fire hazard, and in crowded places filled with trash, a cigarette butt may claim even more lives than falling furniture. We couldn’t find news reports of such incidents in Malaysia, but Toronto recorded an average of one balcony fire a week last year, and the leading cause was cigarette butts being carelessly thrown from higher floors.

So we can see that even a small piece of trash can be dangerous, but in Sathiwaran’s case, the chair was thrown from the 21st floor, and judging by the picture, it’s estimated to weigh around 12 kilograms. We’ll let you figure out the ramifications of doing something like that on your own. In the mean time…

How can you stop something like this from happening again? The Kuala Lumpur City Hall (DBKL) had acknowledged that residents throwing rubbish from the upper floors had been an issue for quite some time now.

“We know that many are throwing rubbish and other objects from their floors. We have issued notices to such residents before. Under the housing law, they cannot do such things. DBKL will take action against those who throw rubbish, not just by issuing compounds but by evicting them.” – Wan Muhammad Ghazali Nor, DBKL’s Community Development and Urban Wellbeing Department director, for the Malaysian Insight.

In response to recent events, the DBKL hatched a plan to build concrete slabs on the outer walls of the PPR flats to shield residents walking below from all the falling trash. However, that’s going to take some time, so until that happens safety nets will be installed instead.

But why not just stick with the safety nets? The DBKL had tried it before at the Seri Pantai PPR, and the maintenance turned out to be very costly when people just kept throwing rubbish down and they get stuck in the net, making it hard for the cleaners to clean them. Concrete slabs would be easier to clean, according to Wan. 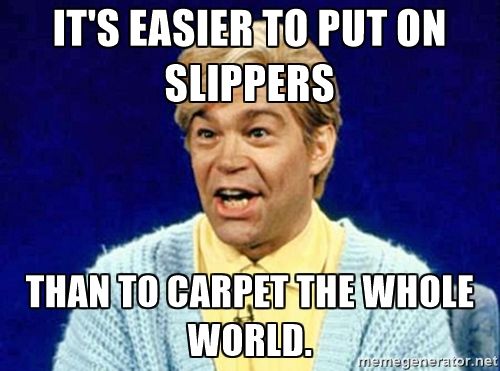 There’s a profound meaning in there somewhere. Img from Pinterest.

However, the problem can’t be easily solved by either choosing concrete slabs or netting. Unless the community themselves stop taking the easy way by chucking their waste down the balconies, the problem remains. Datuk Dr Loga Bala Mohan, the Deputy Federal Territories Minister, had stated that the enforcement does not deserve all the blame in this case.

“We are taking this matter seriously. When something like this happens, the public put the blame on enforcement, when the real problem is the irresponsible and inconsiderate people who need to be taught about community living,” – Datuk Dr Loga Bala Mohan, for the Star.

The death of Sathiwaran was a tragic, unfair one, but it brought to light a serious problem that had been overlooked for a long time. Sathiwaran’s mother, S M Kasthuribai, wants her son’s murderer to face the death sentence, as she’s afraid that if the perpetrator gets away scot-free, others may face the same predicament in the future.

“My son was murdered. I want the perpetrator to face the death sentence. If he gets away, I’m afraid a similar incident will happen to someone else. Let my son’s death be the last. Let this be a lesson to all,” – M S Kasthuribai, for The Star.

Share this article:
NAH, BACA:
Wait. Does KL's 1 am entertainment ban apply to PJ too!? And what's 'entertainment'?