Malaysia just opened the Tun Mustapha Park – the BIGGEST marine protected area (MPA) in the country. It’s one million hectares, which is equivalent to 10,000km², which is larger than Selangor, it’s around the size Kedah and KL combined!

The park is located at Kudat, Pitas and Kota Marudu, at the northern tip of Sabah. Why they chose that place is because it’s home to the SECOND LARGEST concentration of coral reefs in Malaysia (the largest is also in Sabah, but in Semporna). Seriously, if you want to Find Nemo, this is the place, guys.

We read that one of the reasons people go diving is to explore parts of the world that many don’t get to see. We’re so blessed to have gorgeous coral reefs like that right here in Malaysia yo! Donnid to need keluar negara to have one of life’s most amazing experiences (next to reading CILISOS, of course 😛 ). If you’ve never done this before there is always a first…

This marine park is the size of KL and Kedah combined!

Woweee how long would it take to cover the entire perimeter? Because of its sheer size (and the complexity of balancing commercial and ecolololological interests), it took 13 YEARS to get Tun Mustapha Park officially classified as a marine park. Here’s a map of the area: 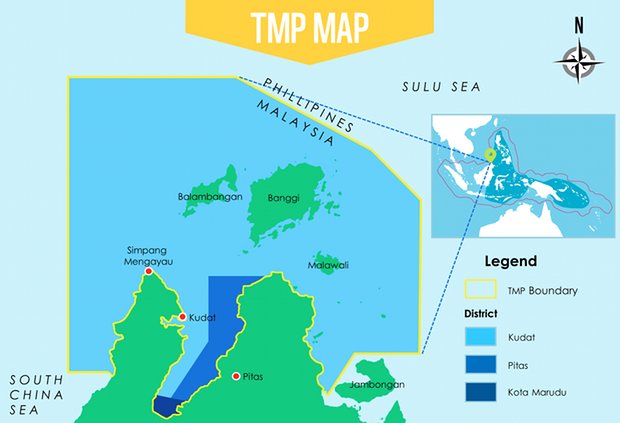 It is also located in the Coral Triangle – a roughly triangle-shaped area of the waters of Malaysia, Indonesia, Papua New Guinea, the Philippines, Solomon Islands and Timor-Leste (click here to view map). This Coral Triangle has been nicknamed “the Amazon of the seas” and its biological resources sustain the lives of over 120 million people. It is the global centre of marine biodiversity, being TOP on the priority list of World Wildlife Fund for Nature (WWF) for marine conservation.

Knowing that the whole Coral Triangle is an awesome place already, what makes this zoomed-in, narrowed down area in Tun Mustapha Park any special? Well, when Sabah government had an expedition to check out the area, they discovered a new gall crab here, named Lithoscaptus semperi! Quite a cute lil’ fler.

Aside from that, they also discovered four rare coral species, previously thought to be only present in Semporna and Berau. And one species known to be very rare in the Philippines and Indonesia, is relatively abundant in this park.

But you know, the park is not just reef, reef, reef, and nothing else. There are also mangroves, limestone caves, white sand beaches, more than 50 islands, productive fishing grounds and seagrass beds.

There are a number of key turtle nesting areas, offering opportunities for “voluntourism”. Voluntourism (or volunteer tourism) is a trend now, where people travel to do volunteer work instead of sightseeing or other normal touristy stuff. So, Malaysia has several places to work with turtles (here and here). Would this be something you’d like to try? Check out the accommodation offers from our partners at HotelsCombined.

Marine life aside, Tun Mustapha Park is home to more than 80,000 people living in coastal areas and islands. These locals depend on traditional small-scale fishing, to commercial fisheries, to survive. You can imagine what a massive challenge it is to maintain the delicate balance between the environment and the growing needs of the population. Now here’s where the problem comes in…

To understand why this is such a big deal, we need to look at what defines a marine park. According to the Department of Marine Park, it’s defined as a zone established to protect and conserve various habitats and marine aquatic life. That sounds a bit vague now, but looking at it more closely, the management sets marker buoys to separate activity areas – for example, this area is specifically for diving, or strictly no fishing past these buoys, etc.

NAH, BACA:
There's been a series of elephant deaths in Sabah. And palm oil may be a cause.

Fishing is absolutely prohibited in the marine park area. Under the Fisheries Act 1985, it’s an offence that carries harsh penalties of a fine of up to RM20,000 or two years jail. Not only fishing, but if a person tries to curi any aquatic animal or plant, or even SAND, or pollute the area, they will kena. Fishing is only allowed outside the marine park. So that’s what the marker buoys are for…to say this area is off-limits, anything beyond that, you can fish there.

What makes Tun Mustapha different from other marine protected zones, is that they’re ALLOWING commercial fishing. Most other parks don’t do that for obvious reasons. However, this one is pioneering a mixed-use approach where the commercial fishing and small-scale fishing can continue, BUUT in designated zones that the fishermen themselves have helped select, in consultation with other stakeholders.

This raises some concerns about maintenance la, coz as the research team itself revealed there was a lot of evidence of negative impacts, including blast fishing (a total of 15 bombs were heard during the trip!). Plus, the fact that bigger creatures like sharks and turtles were conspicuously absent, it indicates the ecosystem is under pressure. When coral is damaged, areas with minor damages can recover in 3-5 years…bigger damages 5-10 years…but others may NEVER recover. Yep, it’s that serious. Gone means gone for good.

Can Malaysia maintain a marine park of this size? This is a screenshot of a video the expedition team filmed underwater. We did not Photoshop a single thing. Click to watch

See that picture up there? How does it make you feel? For us, it made us feel like we were in a whole other universe. One that we wanted never to change, never to be destroyed (seriously, you have to watch the expedition videos). We know we built this image in your heads that Tun Mustapha Park is this an awesome conservation project and so on. It CAN be, but if the enforcement is done right.

Thankfully Tun Mustapha is under Sabah Parks which happens to have a good track record. The guys responsible for Kinabalu Park, Tunku Abdul Rahman Park, Turtle Island Park and Sipadan Island Park and so on. All which have gotten the most amazing reviews on TripAdvisor from local and foreign tourists alike (click links for reviews). In fact in 2006, Sabah Tourism Minister Chong Kah Kiat was angry when he heard reports of coral damage in Sipadan, that he threatened to close the diving spot!

To support Sabah Parks, you can pay for Conservation Charge tickets every time you visit a marine park in Malaysia. Don’t curi-curi sneak in laaaa. The money that goes into Conservation Charges are pumped into building facilities, conservation, pays the park rangers’ salaries, etc.

For 13 YEARS, the expedition team, Sabah government, WWF Malaysia and so many stakeholders, including of course Sabah Parks, poured hard work into creating this beautiful marine park. We just hope it will not go to waste. We hope we can create a world where people and nature can co-exist and mutually benefit from each other.